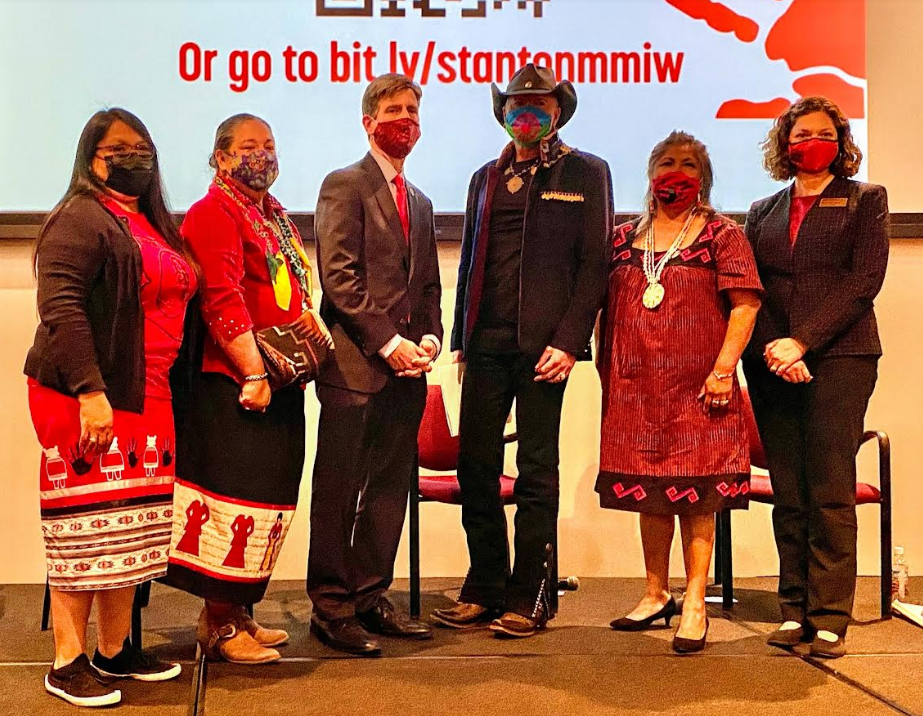 During his keynote address at a Murdered and Missing Indigenous Women & Relatives (MMIWR) event at The Heard Museum, Navajo Nation President Jonathan Nez made a point to thank award-winning film director Rain for making Somebody’s Daughter (1492-) and Say Her Name.

President Nez cited Navajo culture as a point of reference to emphasize the importance of the films.

A written statement from the Office of the President and Vice President of the Navajo Nation subsequently affirmed President Nez’s appreciation for Rain’s work, and also acknowledged “all grassroots and community advocates, victims, and survivors for telling their stories and for their dedication and commitment to helping families and communities.”

Two days before the event, Rain received the City of Tucson’s “Outstanding Contribution in Film” award from Mayor Regina Romero for Somebody’s Daughter (1492-) and Say Her Name. Mayor Romero was one of the earliest supporters of Somebody’s Daughter.

President Nez cautioned that MMIWR wasn’t a crisis unique to North America, but a tragedy that is impacting Tribal people worldwide. During his address, Rain supported President Nez’s assessment.

“I take every aspect of this tragedy personally,” the filmmaker began, recounting relationships he has developed with several mothers of MMIWG victims. “When your life-givers are being taken, when your future grandmas are being taken, if we don’t take it personally, we won’t realize that this is an existential threat to Tribal people not just here in the US and Canada, but as President Nez said, worldwide,” Rain stated.

“It is also crucial to focus on preventative efforts. As leaders, we have to invest and continue our community-based projects and programs that help Navajo families and children to help prevent and offset the impacts of social issues. We must all create a safer and healthier environment for our children and vulnerable populations,” said First Lady Nez, who serves on New Mexico’s MMIW Task Force.

“Rain, I don’t know whether to cry or applaud,” said Congressman Stanton at the close of Somebody’s Daughter (1492-). “Thank you for making such a powerful film.”

The audience’s response mirrored the congressman’s, with comments from “brilliant” to “heartbreaking.” With new sections on what UN Women dubbed the “shadow pandemic” – increased violence against women in marginalized communities during COVID-19 lockdowns – presented by award-winning actor, Georgina Lightning, further exploration of the Oliphant ruling deftly provided by Wyoming State Senator and Navajo Nation Tribal citizen, Affie Ellis, and a contribution from President Joe Biden, Somebody’s Daughter (1492-) surpasses the groundbreaking original in emotional and educational resonance.

During a wide-ranging and informative debate, Delegate Crotty spoke passionately about the experiences of victims’ families on the Navajo Nation, and the paucity of both resources and commitment from federally funded agencies which often leave families carrying the investigative burden as well as the trauma of loss. Crotty emphasized the need for accountability.

“I will be your champion in Congress for this issue,” Congressman Stanton announced.

“Thank you for caring and for your words,” Delegate Crotty responded. “We will be observing what you do in Washington, DC.”

Rain thanked Congressman Stanton for publicly questioning Attorney General Merrick Garland’s apparent lack of urgency on the MMIWG crisis. During a House Judiciary Committee hearing on October 21, Stanton questioned Garland about why the Department of Justice was failing to live up to commitments on MMIWG made by President Biden.

“I found it amazing that his answer to you was, and I paraphrase, ‘Just because it doesn’t look like I’m doing anything, don’t assume that I’m not doing nothing anything,’” Rain said to Stanton. “In my experience, if it walks like a duck and quacks like a duck, I’m going to assume that it’s a duck until there’s evidence to the contrary,” the filmmaker added, bringing a momentary note of levity to the intense discussion.

With his customary oratory flourish, Rain called for a Congressional Oliphant ruling fix, and for the Major Crimes Act “to be repealed or radically overhauled.”

“We have a 19th century paternalistic law still in place in the 21st century, which today is more repressive than it was when it passed in 1885,” he said.

Rain was unsparing in his critique on what he categorized as “inadequate and incremental” legislative and executive actions to date, “that only touch upon the periphery of the tragedy and fail to address the foundational causes.”

Echoing Tribal leaders in Somebody’s Daughter (1492-), he urged Members of Congress to advance the Reduce, Return and Recover Act that has laid dormant since the late civil rights icon, Congressman John Lewis, passed away.

The Gallup Independent has twice reported how, during a recent presentation and screening of Somebody’s Daughter (1492-) at the city’s historic El Morro Theatre, citizens from the Navajo Nation asked Rain if he would make a film focusing on MMIWR cases on the Navajo Nation to give voice to those families missing loved ones.

When asked to comment by Native News Online, Rain “respectfully deferred” to the Navajo Nation, and suggested that any statements relative to future MMIWR initiatives on the Navajo Nation would be made by the Office of the President and Vice President, or Delegate Amber Crotty.

A trailer for Somebody’s Daughter (1492-) edited by double-Emmy winner and Native News Online contributor, Ari Amehae, can be viewed at www.somebodysdaughter.com