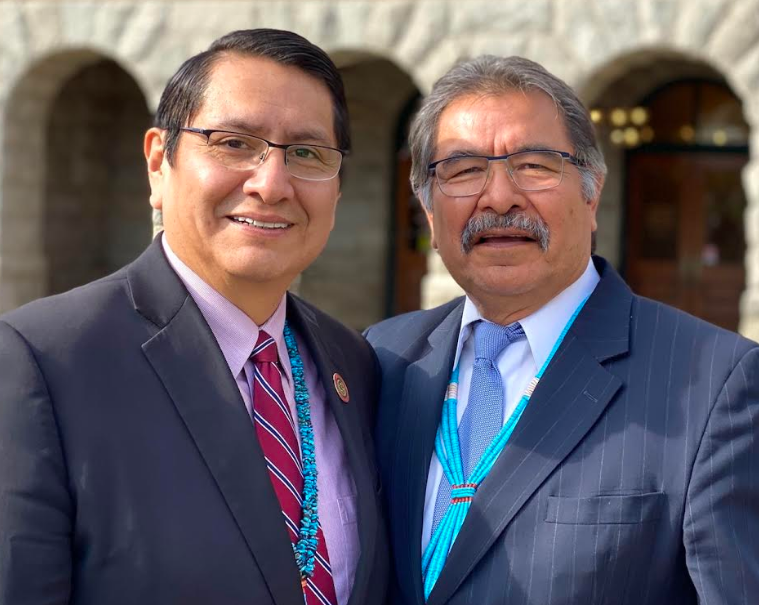 WINDOW ROCK, Ariz. — The Navajo Nation is mourning the loss of its former President and Arizona state legislator, Albert Hale, who passed away on Tuesday from complications from Covid-19. Hale served as the second president of the Navajo Nation from 1995 to 1998. He was 70.

“To the family of Albert Hale, we offer our heartfelt condolences and prayers at this difficult time. We join our Navajo people in grieving for the loss of our great leader, a loving family man, and my brother. Throughout his lifetime, he demonstrated his love and compassion for our people through his service and all of his great contributions as president of the Navajo Nation and as a member of the Arizona Senate and House of Representatives,” Navajo Nation President Nez said.

The family of Albert Hale issued the following statement: “The Hale Family appreciates the outpouring of prayers and condolences for our mighty leader Albert Hale. The Navajo Nation knew him as Ahbihay but we knew him as a loving and supportive dad and husband. He deeply cared for our Diné Nation and people. His contributions were immense and we know that his work as a leader and lawyer impacted so many lives. We will carry on and honor his legacy as a leader and traditional man.”

“The Navajo Nation prays for the family and relatives of our leader, Hon. Albert Hale. As a former president of the Navajo Nation, he is remembered for his service and dedication to the Navajo People, which continued beyond the borders of the Nation when he was called to represent our district in the Arizona Legislature. We recognize his positive contributions to the development of numerous initiatives that have advanced the causes of Navajo People both at home and abroad,” Navajo Nation Council Speaker Seth Damon said.

“Hale was simply known as “Ahbihay,” a name that caught on simply because most older Navajos heard this on the local radio stations and because the “r” is simply missing from the Navajo alphabet,” Joshua Lavar Butler, owner of Sandstone Public Relations and former Navajo Nation councilman, told Native News Online.

Hale will be remembered as someone who opened doors for so many young Navajos aspiring to help their people through political office, according to Butler.

“More than 20 years ago when I was doing community organizing and heavy political work, I could always count on Hale to show up to our events. He believed in our work and he supported the ushering in of young people into leadership positions. He will certainly be missed, he was a trailblazer and he will always remain a statesman of our Navajo Nation,” Butler said.

At a young age, Hale experienced the atrocities of the boarding school era and graduated from Fort Wingate High School in 1969. He later earned a Bachelor of Science degree from Arizona State University and a Juris Doctor degree from the University of New Mexico. He was a member of the Navajo Nation Bar Association and the New Mexico Bar Association and served in many different capacities at various levels of government and also had his own private law practice.

“Throughout his service to the Navajo Nation, he helped our people in many ways by helping to secure water rights in the state of New Mexico, advocating for the remediation of uranium mine sites and mine workers, securing critical funding at the state level, and for his outspoken advocacy for people of all backgrounds and nationalities. We ask all of our Diné people to join us in honoring former President Hale and to offer prayers for his family,” President Nez added.

On Tuesday, President Nez and Vice President Lizer issued a proclamation calling for all flags on the Navajo Nation to be flown at half-staff beginning on Wednesday, Feb. 3, 2021 through Saturday, Feb. 6, 2021, in honor and memory of former Navajo Nation President Albert Hale.