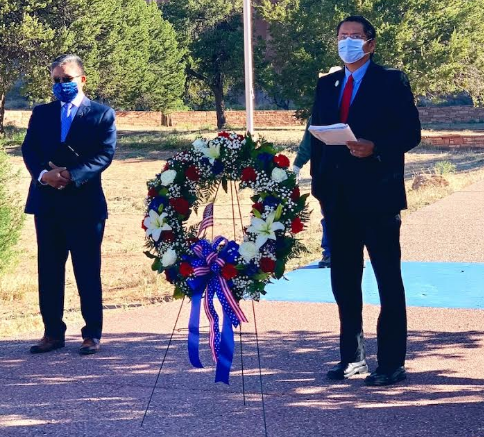 WINDOW ROCK, Ariz. — Navajo Nation leaders placed a wreath to honor fallen warriors on Memorial Day at Veterans Memorial Park in Window Rock. The park lists the names of Navajo men and women who paid the ultimate sacrifice in the United States armed forces and those who are still missing in action.

Flags were lowered to half-staff at Veterans Memorial Park in honor of the many who gave their lives in service to our country.

With the Navajo Indian Reservation on lockdown because of the COVID-19 pandemic, this year’s wreath laying ceremony was live streamed. 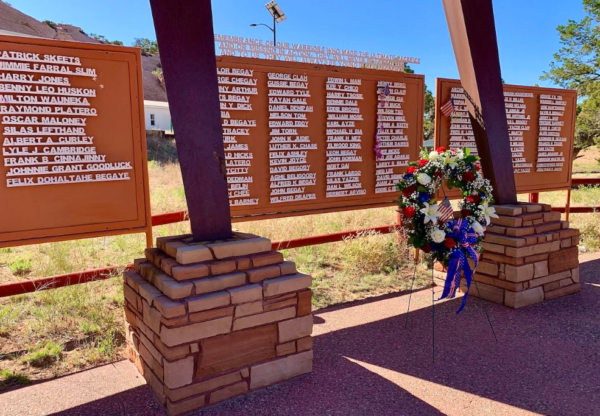 The names of Navajo Nation men and women who gave their lives in the U.S. armed forces and those missing in action are posted in Veterans Memorial Park in Window Rock, Ariz.

“Today, we pay special tribute in honor of all the warriors who fought for this country and gave their lives for everything that we have including our land, our language, and our sovereign ability to determine our own future,” Navajo Nation President Jonathan Nez said. “To this day, we have many of our sons and daughters who continue to serve and protect our country and they are always in our prayers as well, along with the Gold Star and Blue Star families. No words can express our appreciation for the unimaginable sacrifices they and their families have made.”

“My grandfather was a code talker. His name was Paul Parrish, so this holiday is significant for my family and important to me because it's a time that our family remembers the sacrifice he made not only for our family, but for our country as well,” Parrish said during the ceremony.

Following the wreath laying ceremony, President Nez and Vice President Lizer distributed food, water, and supplies to Navajo veterans. The event was later opened to the general public once all veterans had received the items. Overall, the Nez-Lizer Administration distributed food, bottled water, and other supplies to 580 Navajo families on Monday.

Vice President Lizer spoke about the importance of remembering and commemorating the sacrifices that past and previous warriors offered for our country and to preserve our freedom.

“We thank the Creator for blessing our Nation with so many great warriors and for giving us our sacred language that helped us in times of conflict. Our Diné men and women have given so much to this country of ours and they deserve the utmost respect and honor. Their families and loved ones are always in our prayers,” Vice President Lizer said.