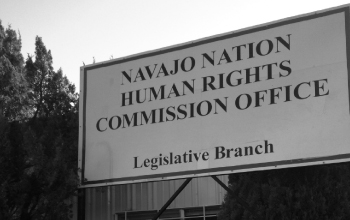 MICHAELS, NAVAJO NATION — An alleged incident at the Gallup, New Mexico Home Depot involving an elderly man and an assistant manager has drawn the attention of the Navajo Nation Human Rights Commission.

The incident was chronicled in a May 18 Facebook post that claims an elderly man was mistreated and subjected to abusive racial remarks by the store’s assistant manager.  According to the post’s author, who was trying to help the elderly man with his purchases, a woman claiming to be the store’s assistant manager made several derogatory remarks and told them “go back to your nasty rez with your diseases!!”

The Facebook post generated many views and got the attention of the Navajo Human Rights Commission, which is seeking the public’s assistance in identifying the Facebook post’s author and the elderly man involved with the incident.

In a press release, the Commission says it has had conversations with the Home Depot regional managers to address the issue.

“The incident did happen, but not as it was posted online,” Home Depot store manager Dominick Lewis told Native News Online. “It happened because we are limiting the number of people into our store because of the coronavirus, but it did not happen as reported.”

The Commission said it would like to locate and hear from the elderly man who was at Gallup Home Depot store and the individual who intervened on behalf of the elderly man.

“Without statements from the elderly individual and from the person who intervened, the Commission cannot confirm there was no derogatory remarks being stated by the Home Depot employee(s),” the Commission wrote in a press release.

If you have information about who the elder and interveners are, or any questions or concerns please contact the Commission at their temporary number at 505-488-3189.