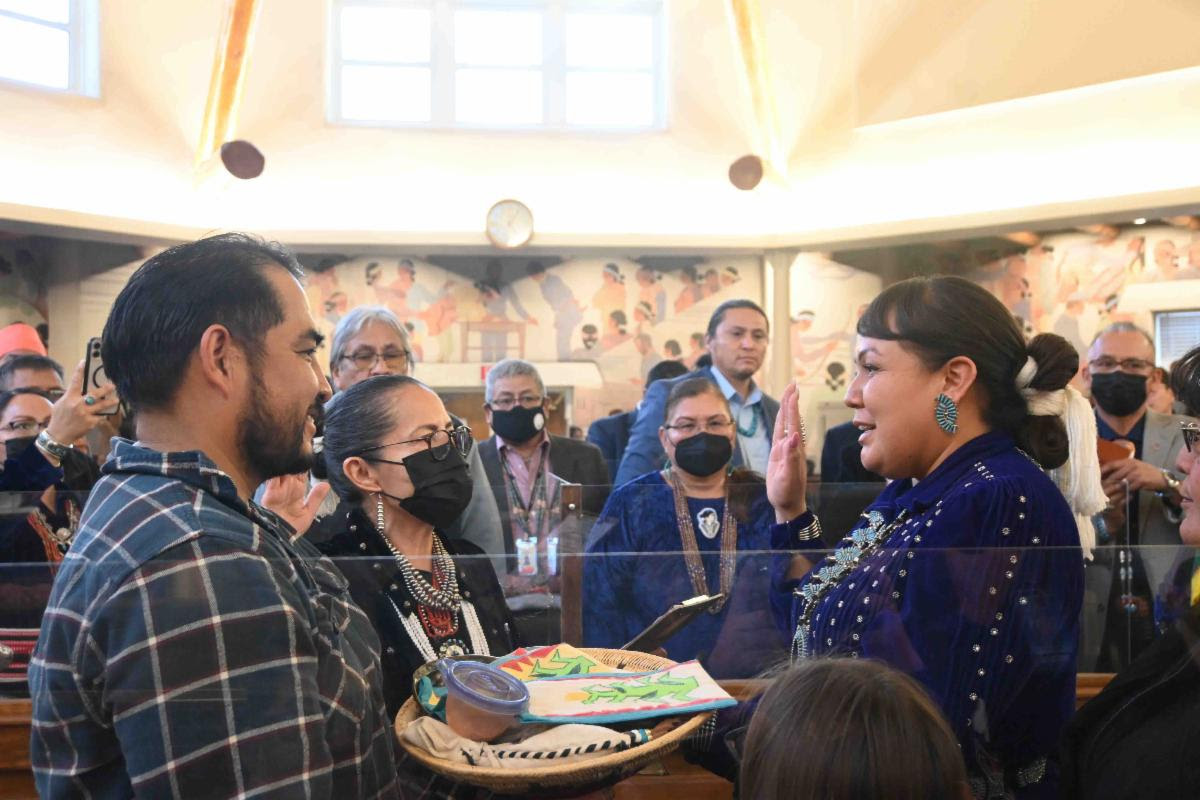 History was made on Tuesday when the 25th Navajo Council elected its first female Speaker ever during the opening of its Winter Council session.

The election of Crystalyne Curley as Speaker of the Navajo Council came two weeks after Richelle Montoya was sworn in as the first first-ever female vice president of Navajo Nation and nine women, including Curley, were sworn into the 25th Navajo Council.

Curley beat three opponents vying for the Speaker position. Among others nominated for Speaker were Council Delegates Eugenia Charles-Newton, Carl R. Slater, and Otto Tso. During a first vote, none of the candidates received the majority of the votes, which led to a run-off election. In the run-off election, Curley received 13 votes and Tso received eleven 11 votes.

Curley is Tsenjikini and born for To'aheedliinii. Her maternal grandfather is Kinyaa'aanii and her paternal grandfather is Dził t'aadi Kinyaa'áanii. She is originally from the community of Fish Point, Ariz., located within the Tsélání/Cottonwood Chapter. She is fluent in the English and Navajo languages.

“I extend my appreciation to my colleagues of the 25th Navajo Nation Council for having the confidence in me to lead the Legislative Branch and to serve as the Speaker of the Council,” Curley said in a statement. “We have many challenging issues to address and I look forward to working collectively with my colleagues and the other branches of government to make progress for our people and communities across the Nation. Through dedication, hard work, and prayer, the 25th Navajo Nation Council will remain committed to positive changes and accountability as we move forward together.”

During the presentation of her platform, Curley said that she strives to be a voice for Navajo people living in remote areas without basic infrastructure and amenities, which she attributed to growing up in a rural community with no electricity or running water.

Despite the challenges of growing up in such conditions, Curley earned two bachelor's degrees from Arizona State University and a Masters in Public Administration from the University of New Mexico.

She previously served as a policy analyst with Diné College and the Navajo Government Development Office. In addition, she served as a Legislative District Assistant and Sr. Public Information Officer for the Office of the Speaker and Office of the President and Vice President before being elected to the Council this past November, representing the communities of Tachee/Blue Gap, Many Farms, Nazlini, Tselani/Cottonwood, and Low Mountain. From 2011-2012, she served as Miss Navajo Nation.

Curley was joined by her spouse, daughter, and mother as Navajo Nation Chief Justice JoAnn Jayne administered the Oath of Office.