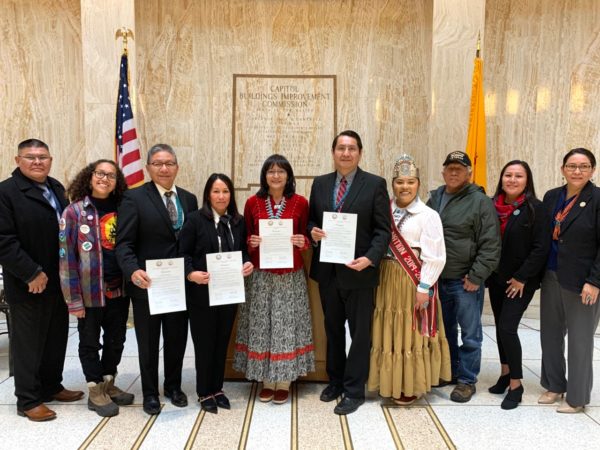 “Human trafficking is a very serious issue around the world and more so for Indigenous peoples, including New Mexico tribes. We are proud to partner with Secretary Trujillo to raise awareness throughout the state for our women and children and their families who have been affected by human trafficking. We need to continue working together to end this problem in our communities,” said Navajo Nation President Jonathan Nez.

According to the International Labor Organization, there are approximately 20.9 million victims of human trafficking globally, 26-percent of which are children and 55-percent of which are women and young girls. The National Center for Missing and Exploited Children reported an estimated one out of six endangered runaways are likely child sex trafficking victims, and between 14,500 and 17,500 people are trafficked into the United States each year.

The Navajo Nation and New Mexico Indian Affairs Department proclaim January 2020 as Human Trafficking Awareness Month, in the name of freedom and equity of all people, and encourage education and advocacy to bring forth public awareness to the terrible injustice. We call upon law enforcement, community organizations, families, and the entire Navajo Nation to recognize the vital role we must all play to end human trafficking, states the proclamation.

“I am honored to take part in the signing of the Navajo Nation and New Mexico Indian Affairs Department proclamation recognizing January 2020 as Human Trafficking Awareness Month. Thank you to President Jonathan Nez and Vice President Myron Lizer for your efforts to combat and eliminate this epidemic. I am confident that together, we can raise public awareness of human trafficking and be the strength for the powerless and the hope of the victims,” stated Secretary Trujillo.