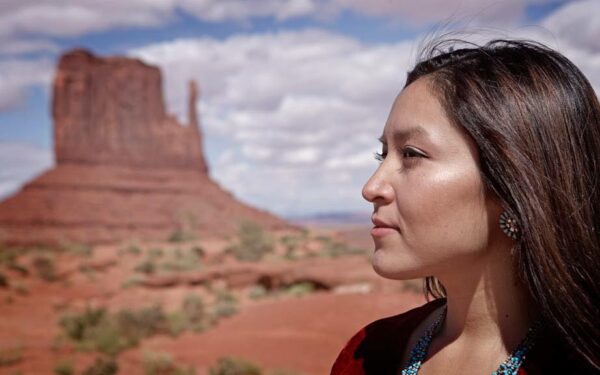 WASHINGTON — Sen. Kyrsten Sinema (D-AZ) has nominated Allie Young, a citizen of the Navajo Nation, to receive the Service Act Award through the Congressional Medal of Honor Society.

In March 2020, Young co-founded Protect the Sacred, a grassroots initiative created in response to Covid-19 to educate and empower Navajo youth and Native youth throughout Indian Country to rise up as the next generation of leaders by protecting their elders, their languages and their cultures.

“Navajo Nation’s Allie Young serves selflessly to expand opportunities for members of the Navajo Nation. Her dedication to her community exemplifies leadership and service,” Sen. KyrstenSinema said Native News Online in an email.

Prior to founding Protect the Sacred, Young was living in Los Angeles working in the entertainment business, when she felt the call to return to her hometown of Kirtland, N.M. as the coronavirus began to spread.

The Navajo Nation has been one of the hardest hit regions nationally by Covid-19.

Last fall, Young drew national attention with a ride to the polls on horseback get-out-the-vote initiative on the Navajo Nation. The initiative got the attention of former First Lady Michelle Obama who shared it on her Instagram page.

According to Sinema’s senate office, Sinema, Arizona’s senior senator, nominated Young for the Service Act Award through the Congressional Medal of Honor Society to recognize Young’s work of consistently placing others before herself through volunteer service.

“As Arizona’s senior Senator, Sinema nominates distinguished civilians in Arizona who have shown exemplary courage and selfless service to their community for the Citizen Honors Awards. The Congressional Medal of Honor Society assembles a panel of the living recipients of the Congressional Medal of Honor who evaluate the nominees and select the winners of each award. The Citizen Honors Awards are given to American civilians who have shown courage and dedication for service in the United States,” Sinema’s office said in a statement.

Author: Native News Online StaffEmail: This email address is being protected from spambots. You need JavaScript enabled to view it.
Native News Online is one of the most-read publications covering Indian Country and the news that matters to American Indians, Alaska Natives and other Indigenous people. Reach out to us at [email protected]net.