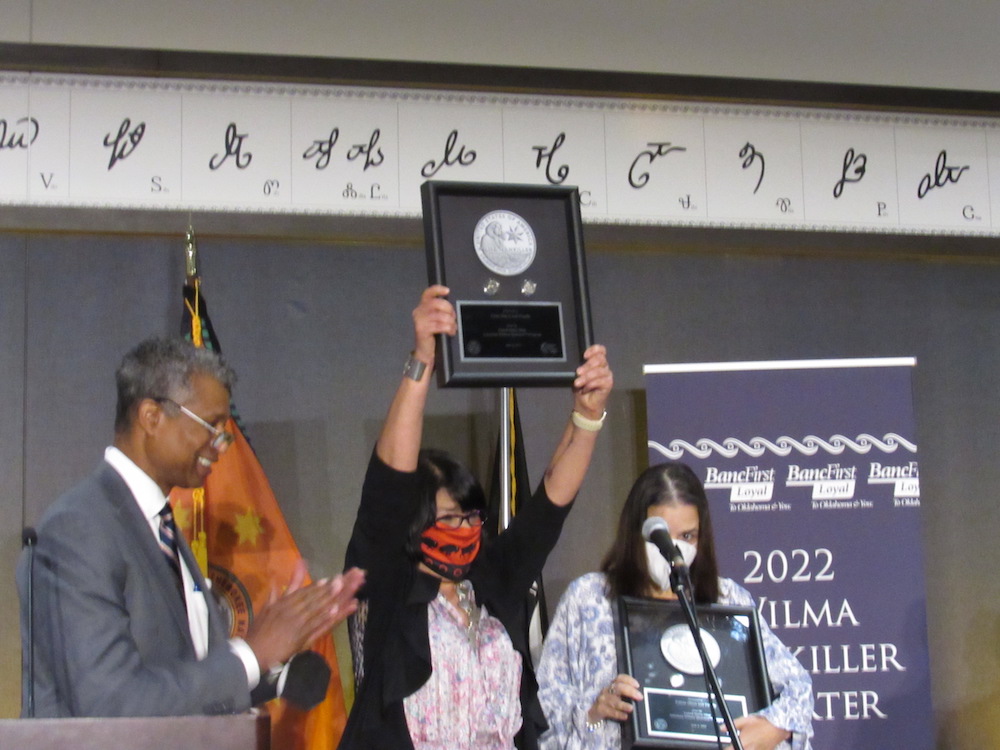 TAHLEQUAH, Okla. — More than 500 people, including the current Cherokee Nation leader, a former U.S. poet laureate, and the century’s most prominent feminist, showed up at the Cherokee Casino in Tahlequah, Okla. on Monday morning for the release of the 2022 Wilma Mankiller Quarter.

Monday’s release was the third in a series of quarters released honoring American women. The first two released earlier this year featured Maya Angelou and Dr. Sally Ride. Other women to be featured in the American Women Quarters Program are Nina Otero-Warren, and Anna May Wong.

Mankiller is cited for tripling the Cherokee Nation’s tribal enrollment, doubling employment and the development of new housing, health centers and children’s programs. 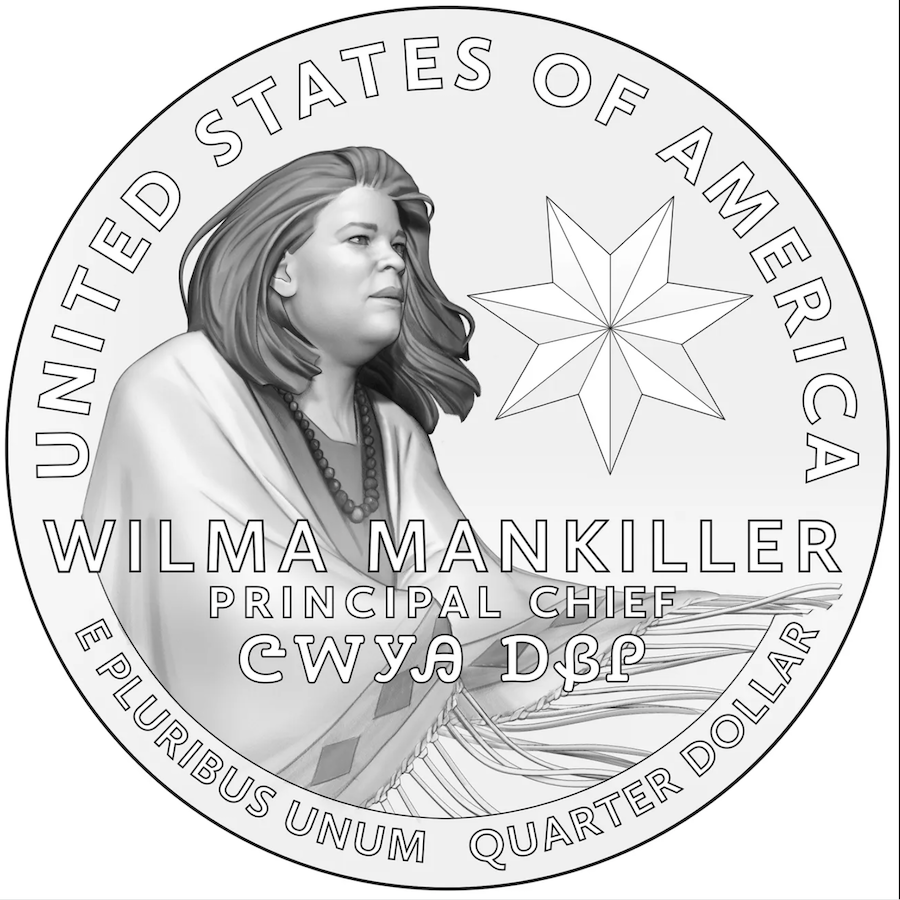 Wilma Mankiller Quarter (Courtesy: U.S. Mint) The enthusiastic crowd cheered for the accolades given to their former leader, as speaker after speaker recalled the greatness of the Cherokee Nation’s first female principal chief.  Mankiller is credited with transforming an impoverished tribe into the progressive nation it is today.

Even though it’s been more than 25 years since Mankiller last led one of the country’s largest tribes, speakers credited her for putting in place mechanisms and policies that have benefited the Cherokee Nation decades later.

Hoskin said every principal chief since Mankiller is measured against her greatness.

Former Cherokee Nation Chief Swimmer reflected on how he asked Mankiller in 1983 to serve as the deputy chief of the Cherokee Nation during his administration. She agreed to run for the position, but told him if he left office before their four-year term was up, she would be out the door with him. 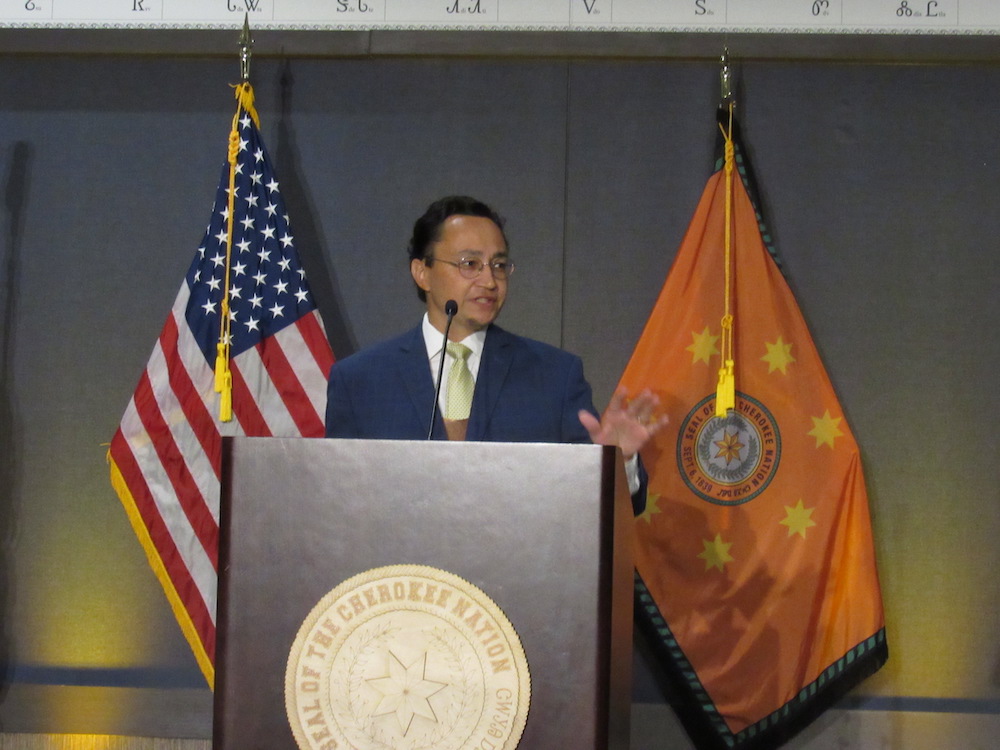 Two years later, he was selected to as  Assistant Secretary of Indian Affairs in the U.S. Department of the Interior and said he was afraid to accept the job if Mankiller was not willing to assume the office of principal chief. To his delight, she changed her mind and agreed to become principal chief.

“She followed her roadmap of how to build the Cherokee. Nation, how we build for people, and how they work in community, health care, education, businesses, and these are the kinds of things that she was able to do after I left, which I just really believe that there was something the hand of God there,” Swimmer said.

Former Poet Laureate Hajo, who wrote an introduction to a new book of poetry by Mankiller that will be released later this year, read a poem from the forthcoming volume.

After Mankiller left office, she served on numerous philanthropic boards. In 1998, former President Bill Clinton presented Mankiller with the Presidential Medal of Freedom, the highest honor for a U.S. citizen.

Seven years ago, Mankiller was under consideration to replace Andrew Jackson on the twenty-dollar bill.

“It would be poetically just for her to replace Jackson, and I love the thought of her soft and majestic face on money. Not to mention the satisfying contrast of her ferocious name,” Louise Erdrich, who won a Pulitzer Prize for Fiction, said about Mankiller in 2015.

The Wilma Mankiller quarter released on Monday features her wrapped in a traditional shawl with the Cherokee Nation seven-pointed star and the words "Cherokee Nation"  written in Cherokee syllabary. George Washington's likeness is on the other side of the coin.