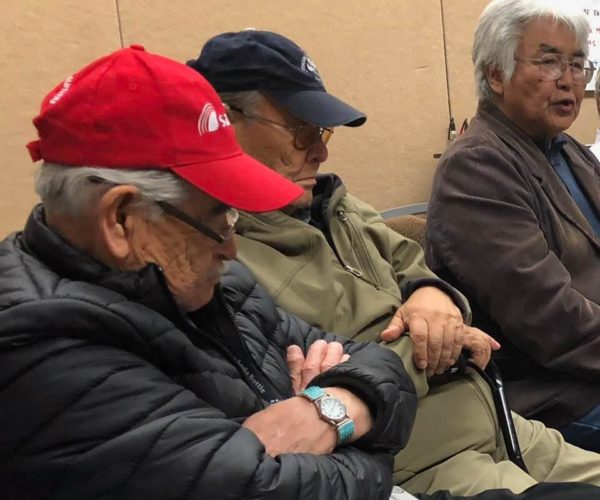 GRAND RAPIDS, Mich. —The COVID-19 pandemic has altered our normal lives in ways that seemed unimaginable until three weeks ago.

Native News Online views its coverage of the deadly coronavirus as a top priority at this time in order to get the word out to help stop the spread of the virus across Indian Country and beyond. In order to bring informative reporting to Native News Online readers, we go through a rigorous process of separating fact from fiction which involves monitoring hundreds of COVID-19 related press releases and articles.

One story that we did not cover has been gnawing at my mind all week long. So, I want to address it now.

The story dropped last Monday night, when Texas Lt. Gov. Dan Patrick, who turns 70 this week, suggested during a Fox News interview that senior citizens should be willing to die in exchange for restarting the American economy.

"No one reached out to me and said, 'As a senior citizen, are you willing to take a chance on your survival in exchange for keeping the America that all America loves for your children and grandchildren?' And if that is the exchange, I'm all in," Patrick told Fox News.

Their notion is that the benefits of saving the American economy outweigh the risks to the elderly population, who are more vulnerable to dying from COVID-19 than younger people.

Their comments made me wonder if they watched the 1990s movie Grumpy Old Men a few too many times and now they think that old people are not only grumpy, but that they don’t really matter in the larger scheme of life.

The story gnawed at my mind because the whole concept that seniors are expendable conflicts with the American Indian and Alaska Native belief that we are to honor, respect, and revere the older generations. We even opt for the word “elders” over senior citizens when referring to the older ones among us, which distinguishes them as high-status citizens in our society.

The very suggestion that the American public should choose to get the economy going again without concern for the health of our elders is preposterous because within Native culture, our elders serve an important and honored role in our lives

They are the keepers of knowledge and wisdom, and they serve as our guides. It is ingrained in us from childhood that our elders are to be honored, respected and revered. Elders are seen as being the most beautiful part of our culture.

Contrary to Hollywood’s definition of beauty, the more wrinkles our elders have, the more beautiful they become to us. The lines of their faces are indicators of life lessons and wise journeys.

In the Anishinaabemowin, the language of the Ojibwe, Gichi ayaa’aa is the word for elder, which when translated to English means “great being.” A term for old man in Anishinaabemowin is “akiwensii,” which literally means “earth caretaker.” The words and language embody the value that elders have in Native culture.

In Native culture, elders have an intrinsic value that is worth more than dollars and cents.

To validate my own belief on the subject, I asked Mike Williams, a friend who is chief of the Yupiit Nation in Akiak, Alaska for his opinion of Lt. Governor Patrick’s suggestion. A man known for his honesty, the chief did not disappoint me with his response.

“That is crazy. These guys are nuts!” Williams said. “We take good care of our elders. They are our libraries, full of knowledge and history. We do not want them to pass.”

On Sunday afternoon, as I watched the livestream from Navajo Nation’s virtual town hall, I was given further validation when I heard Navajo Nation President Jonathan Nez admonishing the young Navajo to stay home. He said he is still seeing too many of them ignoring the order to stay home to combat the spread of the virus.

“Young people, especially, I see too many driving around. You don’t even know if you have the virus and are passing it around. Don’t be selfish, think about your grandmas and those people who have health conditions,” Nez said. “We have already seen death from this virus.”

After processing all of my feelings about this controversial situation, I realized that it has only strengthened my belief that all life is precious—especially the lives of our elders.