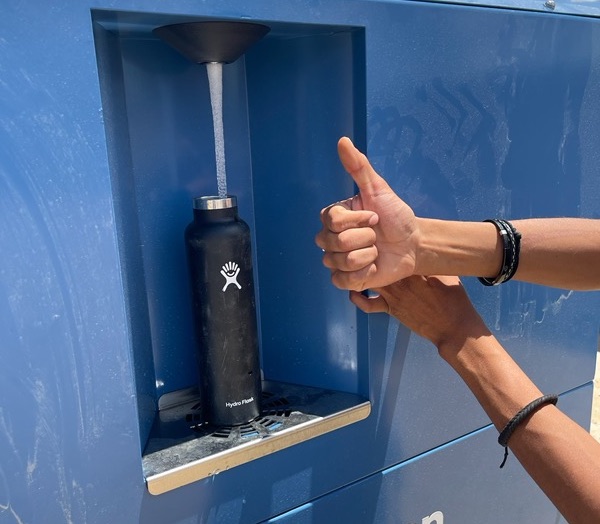 ROCKY RIDGE, Ariz. — The Rocky Ridge Gas and Market is the only store in a rural Navajo community in northeastern Arizona. It offers a variety of basic needs, including food, toilet paper and, most recently, clean drinking water. From a concrete pad next to the store, a pilot project from Watergen Inc. is providing a new water source to a community where access to water has been limited by drought, lack of infrastructure, and coal mining.

“Right now, we have people who are curious who read (about the project) through Facebook or whatever, and they’re coming by and they’re saying, ‘We want to see it,’” Germaine Simonson (Navajo), the store’s owner, told Native News Online. “Of course they want to see it, because they don't believe… and we’ve had people coming to take water. And so we just let them.”

Watergen is an Israeli company that produces generators that capture and filter moisture from the air to provide drinkable water. The company donated one of its Gen-M generators to a community in the Hard Rock Chapter of the Navajo Nation as part of its mission to increase access to water around the world.

“It was hard getting the machine there. It’s certainly not the easiest place that we could’ve picked, frankly, to put a machine, but it was the one that we felt was probably the most deserving and would probably test the technology in the best way possible,” said Nick Harris, Watergen’s vice president of sales and marketing. “So, frankly, if it works there, it’ll work everywhere else.”

Watergen has said that the Gen-M generator can produce up to 211 gallons of purified water each day. According to the Environmental Protection Agency, the average American household uses more than 300 gallons of water every day in their home.

“So right now we are in the process where we’re testing how much water it’s producing each day given the temperature and relative humidity of the area,” said Arlene Soto, Watergen’s director of product and consumer experience. “So we are getting information from (Rocky Ridge Gas and Market) on a weekly basis… so we can then determine how much water per day they’re actually able to produce in that region.” 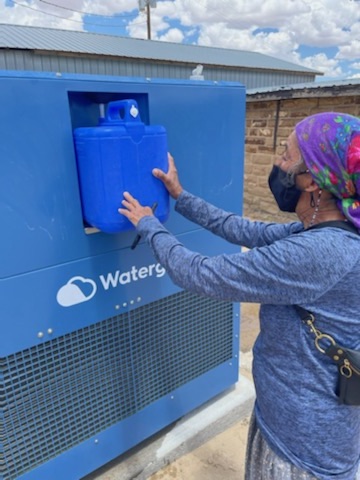 Simonson estimates that the generator is currently producing enough water for the personal use of four to five people, but she said it’s hard to tell because when someone turns on the tap, the generator’s tank leaks about as much water as it dispenses. Simonson said the store has reported this problem to Watergen, but busy schedules on both sides have left the issue unresolved so far.

According to Harris, the generator uses approximately 1.32 kilowatt-hours of electricity to extract and filter one of the 211 gallons of water it’s capable of producing in a day. That’s close to the amount of energy that the average dishwasher uses for one load of dishes, according to Silicon Valley Power.

Simonson said that local Navajo water advocacy organization Tó Nizhóní Ání, which got her store involved with the project, will be paying for the electricity costs incurred by the generator for the first year.

According to Tó Nizhóní Ání (TNA), the Navajo Aquifer, which the Navajo Hard Rock Chapter and other Native communities rely on for drinking water, has been drawn down by overpumping by coal mining company Peabody Energy Inc.

TNA said that Peabody’s operations have caused “the disappearance of the springs and seeps once abundant on Black Mesa.” Simonson said the community also relies on water stations set up by the Navajo Tribal Utility Authority.

“Our people have shifted from relying on the local springs and seeps to the local community wells for our water today,” Tó Nizhóní Ání said in a statement. “The local wells tap directly into the Navajo Aquifer, but these structures are not always reliable even then. Our local well has needed multiple repairs this year, making drinking water unavailable while our community awaits the repairs… Therefore, we are diversifying our accessibility to drinking water while the Navajo Aquifer recovers, and the drought continues."

The successful donation of the Gen-M water generator is the result of the efforts of a Native American and Israeli coalition of individuals, organizations, and companies.

Max Samarov of Israeli nonprofit Stand With Us (SWU) said that SWU partnered with Watergen by researching and contacting different communities that lack access to drinking water to find candidates for the pilot project. According to a report from the US Water Alliance, Native American households are 19 times more likely to not have indoor plumbing than white households.

“As we were doing that research, we saw that access to clean drinking water has been a very long standing challenge for a lot of people on the Navajo Nation and also, at that moment in May 2020, Navajo Nation had the highest number of Covid cases per capita (in the U.S.),” Samarov said.

Then-Arizona state Rep. Arlando Teller (Diné) told Native News Online that he met with SWU to determine candidates for the pilot project in his district and suggested the Hard Rock Chapter. Simonson said that Teller reached out to her store about the project nearly a year ago.

“I think it’s a very innovative effort to coordinate internationally and address needs in every community,” said Teller, who is now deputy assistant secretary for tribal affairs in the U.S. Department of Transportation.

Harris said that Watergen has donated a second generator to Native nonprofit Bright Path Strong (BPS) and Watergen’s Native-owned distributor, 4D Products and Services, which will be deployed to another Native community.

In addition, BPS has set up a crowdfunding campaign to raise $400,000 to fund four more Watergen generators for Native communities. Donations are matched by Watergen and 4D Products and Services, and the campaign has reportedly raised well over $100,000 so far.

Harris said that Watergen’s focus is “to get started in some key areas and then to use those as focal points” for work in other areas.

“I think that as we go forward and as months pass and we have this machine, that we will provide some answers,” Simonson said. “And we will have some answers to questions that people have… So we’re just kind of the guinea pig, and that’s fascinating.”