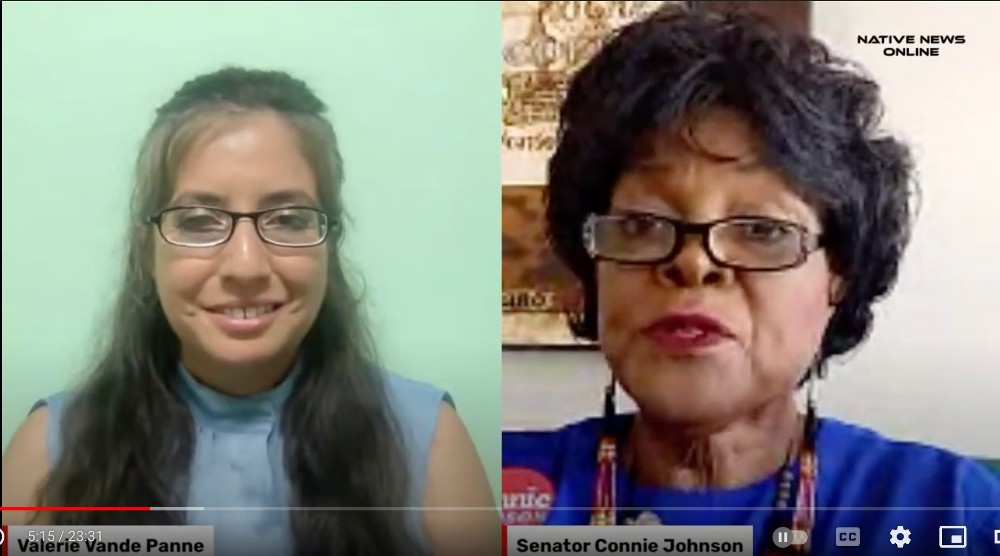 Johnson is a lifelong Democrat born and raised in Oklahoma and if elected would be the first Black Indigenous woman Governor in the U.S. Previously, she served as a State Senator where back in 2012, she added an amendment to a “life begins at conception embryo personhood bill” that would have outlawed the depositing of sperm anywhere except in a woman's vagina. The bill did not pass.

Connie now wants to apply her more than 40 years of public and community service and legislative experience to the benefit of everyday people in Oklahoma. She will fight to provide Tier One Jobs in rebuilding our infrastructure, strengthen Oklahoma’s medicinal marijuana and industrial hemp industries, guarantee public education, and ensure health care as a basic human right for every Oklahoman, especially mental health services.

She joined Native News Online to spread awareness of her campaign values and promises.

Amid the Supreme Court Ruling to strike down Roe v. Wade, ultimately striking down legality to safe and accessible abortions, Johnson promises to protect the rights of women to have autonomy over their own body.

“As Governor, I will continue to be the voice and present the policies that respect women, that celebrate women, through their respect for reproductive autonomy, for easy access to contraception, for novel ideas like free sanitary supplies,” she told Vande Panne. “Women are the basis of the foundation of human life itself. We owe women the respect and appreciation. And as governor, I will celebrate women and ensure that the policies, the proposals that come out, receive educated information.”

In the Democratic primary for governor, Johnson is running against newly declared Democrat, Joy Hofmeister, who was a Republican until late last year.

Watch the interview below to learn more about Johnson, what happened with the super delegates in Oklahoma during the Democratic National Convention when Bernie won the state, and to hear what she plans for Indian Country. During the discussion, Johnson also explained why she is the best Democrat to take on incumbent Republican Governor Stitt.

We’ve also included Joy Hoffmesiter’s statement, below. Hoffmeister said she was too busy to be interviewed by Native News Online. She is the Superintendent of Public Instruction in Oklahoma, and was a lifelong Republican until last Fall.

Joy Hofmeister: Statement on Support of Sovereignty of Tribal Nations

Thank you for the opportunity to share some of my background with Native Americans nationwide.

I recognize and support the sovereignty of Tribal Nations in Oklahoma, and respect the significant contributions tribal members make to our communities through education, healthcare, law enforcement, charitable contributions and economic impact.

As state superintendent, I am committed to supporting all 81,000 tribal students in reaching their full potential – they are a critical part of our student body in Oklahoma. All Oklahoma students should learn about and value the tribal history and culture that shapes our state. That’s why we have strengthened our academic standards to ensure that tribal sovereignty is taught in our schools.

I specifically hired experienced staff at the Oklahoma State Department of Education to work with and for American Indian Students. I empowered those employees to meet with tribal leaders and schools in face-to-face meetings to discuss needs of native youth and build a collaborative relationship. We created a framework for tribal consultation – linking school and tribal leaders in conversation to prioritize supports for American Indian students – that was recognized as a model on a national level.

Additionally, we’ve been sensitive to cultural traditions that impact students’ school experience. Each year we have reminded districts of their obligation to allow Native American students to wear native regalia during graduation ceremonies to honor the rich traditions of their heritage.

I stand against Governor Stitt's disregard for tribal sovereignty and believe many of Oklahoma's jurisdiction issues could be resolved through collaboration and mutual respect. I am proud of the campaign support I have earned from many Tribal Nations and I will not betray that trust.