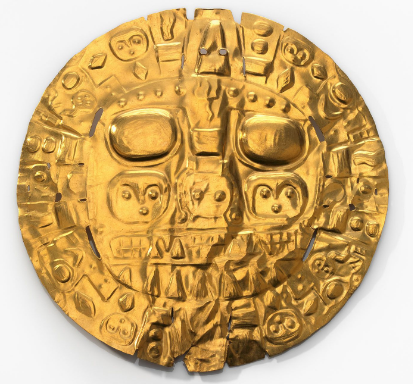 The Preuvian ambassador to the United States took possession of the “Echenique Disc” on Wednesday, June 15, in Washington, D.C. after a memorandum of understanding was signed the Smithsonian’s National Museum of the American Indian and the Peruvian government.

The disc is recognized as the symbol of the city of Cusco, an Indigenous community in Peru.

The memorandum of understanding was signed by Machel Monenerkit, acting director of the National Museum of the American Indian; Ambassador Allan Wagner, minister of foreign affairs for Peru; Alejandro Neyra, minister of culture for Peru; and Victor Boluarte, mayor of the Provincial Municipality of Cusco.

“Peru commemorates 200 years of independence in 2021,” Monenerkit said. “In recognition of this important event and the tremendous significance the disc has for the people of Peru, I am proud to mark this moment together. This return is consistent with the museum’s mission to facilitate the continuity and renewal of Indigenous cultural traditions. We thank the Peruvian government for collaborating with us on this achievement.”

The Echenique Disc is a circular thin sheet of metal 13.5 centimeters (5.3 inches) in diameter, approximately 90 percent gold, 5 percent silver and 5 percent copper. It was made with techniques commonly used in ancient Andean metal work

The disc has been included in several exhibitions during its time in the museum’s collection:

The Echenique Disc will be incorporated by the Ministry of Culture into the National Inventory of Cultural Heritage of Peru.