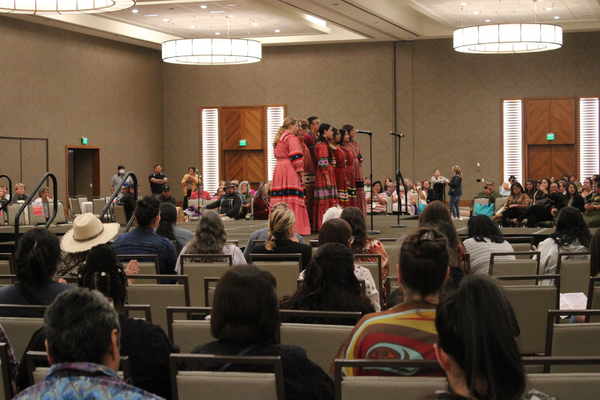 While the conference officially started on Wednesday, the opening plenary session didn’t convene until Thursday morning. Leaders from national organizations, advocates in the White House, and local leaders addressed the convention with announcements and words of encouragement.

Oklahoma City Mayor David Holt said of NIEA on Thursday, “I know that I stand in the place of many Mayors and Governors and public officials across the country in expressing our gratitude for what you do every day.” Holt is an enrolled citizen of the Osage Nation and is Oklahoma City’s first Native American mayor.

National Congress of American Indians’ (NCAI) Executive Director Larry Wright Jr. said at Thursday’s opening session, “It is our commitment to work, continue advocate and be a partner with NIEA, to be the strongest advocate that we can to defend education sovereignty, and defend sovereignty as a whole.”

At the conference, NIEA announced it’s developing a “Whole Child Initiative,” aiming to create a framework that incorporates the mental, spiritual, physical, and emotional needs of Indigenous students to address needs such as substance abuse and suicide prevention.

“The Whole Child Initiative is the next step in our journey to return to our Indigenous knowledge and values for our children and families,” NIEA Executive Director Diana Cournoyer said in a statement. “Through Education Sovereignty and the Whole Child Initiative, we are committed to healing school communities and engaging the hearts, souls, and spirits of students in ways that are both practical and sustainable as we move into a new era of Indigenous education.”

Educators want to address trauma and the needs of children in schools through four pathways: prevention, support, building resiliency, and developing protective factors.

“Our initiative framework is based on four pathways developed by the Center for Educational Improvement,” Melanie Johnson, Director of the Whole Child Initiative at NIEA, said. “Focusing on prevention, support, building resiliency, and developing protective factors, the Whole Child Initiative reclaims the strengths of Indigenous students and taps into their innate brilliance through the power of Education Sovereignty.”

The convention goes through Saturday and features workshops from professionals throughout the country, youth events, a powwow, an awards banquet, a trade show, and elections on NIEA leadership.