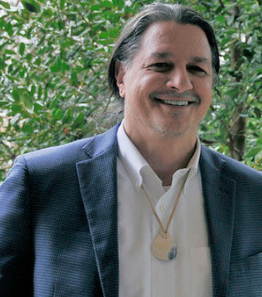 WASHINGTON — The National Congress of American Indians' (NCAI) five-month search for its new Chief Executive Officer (CEO) is over. Citing his experience in economic development, NCAI’s board of directors named Dante Desiderio (Sappony Tribe) the new CEO on Thursday. He has been the executive director of the Native American Finance Officers Association (NAFOA) for the past 10 years.

Desiderio, who was employed by NCAI as director of economic policy during the Great Recession, will take over the helm on May 11 of the largest and most represented American Indian organization in the United States.

“We are thrilled to welcome Dante Desiderio back to NCAI as our new CEO at this critical time. As we emerge from a global pandemic and the social and economic instability that come with such monumental challenges, there is no better leader to guide us through the recovery and rebuilding effort, or to help us navigate the future as it pertains to policy and opportunities with the American Rescue Plan,” NCAI President Fawn Sharp said.

During his tenure, he increased NAFOA’s commitment to its members and grew its national profile as a steward for tribal economic development. He instituted the NAFOA Member Tribes model and successfully transitioned NAFOA to a tribally led organization.

“I am honored to be selected by the National Congress of American Indians to serve as their Chief Executive Officer,” Desiderio said. “I’ve always loved NCAI’s work on behalf of their tribal members and on behalf of Indian Country as a whole. I look forward to serving once again at an organization I respect, and with a team that puts their whole heart into their work and am ready to meet the challenges ahead. I thank the NCAI Board for the trust they put in me and for the opportunity to return to the Embassy and lead the NCAI team as we work together for the betterment of all of Indian Country.”

Desiderio was praised by the leader of his tribe, Sappony Chairperson Dorothy Stewart Yates, after the announcement.

“On behalf of the Sappony, I am very proud that Dante has been selected to lead NCAI as CEO.  Dante has always had a strong commitment and dedication to advocating on behalf of Indian Country and improving the lives of Native Americans. His leadership, work ethic and heart for this work will be as asset to NCAI and all of Indian Country and the entire High Plains Indian Community stands firmly behind Dante as he takes on his new role at NCAI,” Yates said.

Other leaders in Indian Country were pleased with Desiderio's selection as well.

“I congratulate Dante Desiderio on his return to NCAI as their new Chief Executive Officer. His expertise in economic and tax policy have made him a nationally known and respected figure in Indian Country. Dante is an exceptional leader, helping tribes large and small by establishing a framework for sound financial systems, seeking out funding opportunities, and identifying and solving complex financial challenges, all based upon data-driven solutions.  His leadership will serve NCAI well and I congratulate the NCAI board on this wonderful hire.” Chickasaw Governor Anoatubby said in a comment emailed to Native News Online.

“I strongly support the NCAI Board’s decision to select Dante Desiderio to lead the organization.  This past year has been a tumultuous time for Indian Country and Dante’s leadership was apparent throughout the crisis presented by the pandemic. I feel confident Dante will take those leadership qualities with him to NCAI. The Gila River Indian Community looks forward to working with Dante in his new role,” Gila River Indian Community Governor Stephen Lewis said.

“Dante’s background in leadership, finance and economic policy is second to none in Indian Country. He is the right person at the right time to lead NCAI,” Sharp said.

NCAI’s gain is NAFOA’s loss. The NAFOA’s board President Cristina Danforth expressed the organization’s gratitude for Desiderio’s work over the past decade.

"The NAFOA Board and staff appreciates the hard work and dedication that Dante has provided to NAFOA over the last decade. The organization has grown tremendously in scope and influence under his leadership,” Danforth said.