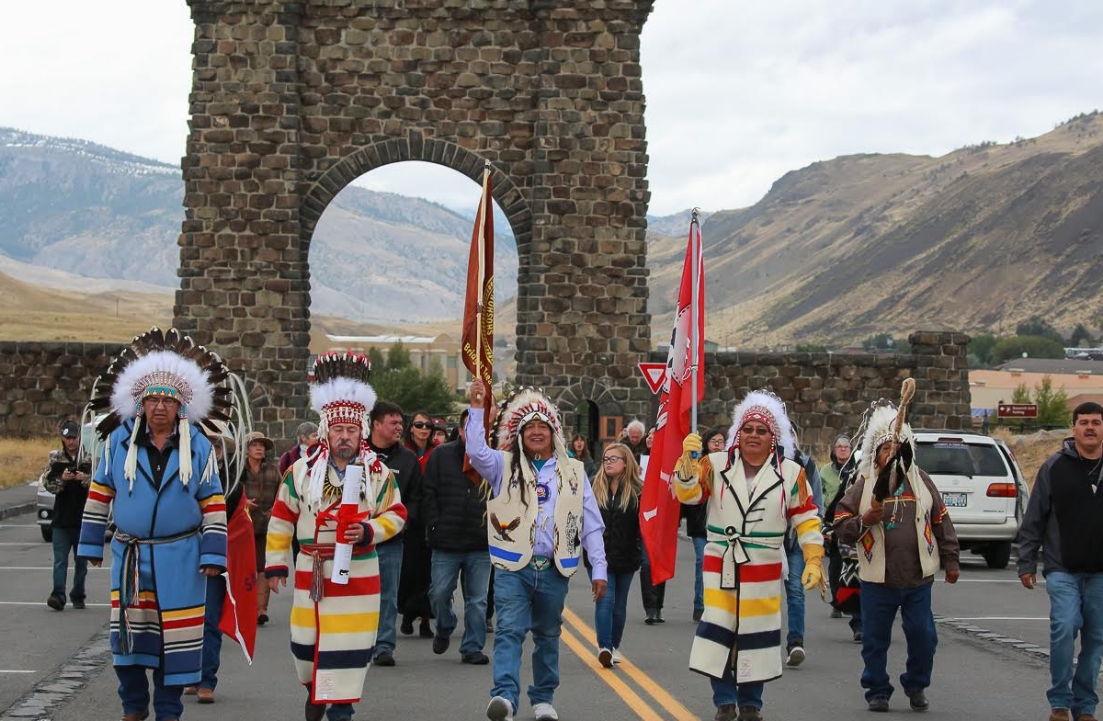 BILLINGS, Mont. — By a unanimous vote of 15-0, on June 9th the US Board on Geographic Names ended a decade-long struggle to remove the name of Lieutenant Gustavus Cheney Doane from a 10,551-foot peak that towers above the southeastern sector of Yellowstone National Park, east of Yellowstone Lake.

Like much of Yellowstone, the lake is a sacred site to numerous Tribes, several of which have origin narratives associated with it. First Peoples Mountain will now grace the horizon above the lake, not Mount Doane.

Park County, Wyoming, which borders Yellowstone, previously opposed the name change, while the Wyoming Board on Geographic Names approved it. All twenty-seven Associated Tribes of Yellowstone backed the removal of what the National Park Service now concedes is an “offensive name.”

“This was initiated years before Charlottesville and the momentum to remove monuments glorifying Confederate officers and slave owners,” said Chief Stan Grier (Bear Returning Over the Hill), President of the Blackfoot Confederacy and Chief of the Piikani Nation.

In 2017, Grier led a march to Yellowstone of Piikani Tribal members and survivor descendants of the Marias River Massacre perpetrated by Doane and units of the US 2nd Cavalry on January 23, 1870. Representatives of the Great Sioux Nation, Northern Cheyenne Tribe, ShoshoneBannock Tribes of Idaho, and the Confederated Salish and Kootenai Tribes were also present and supported the petition. The Tribal alliance presented the Yellowstone National Park Name Change Declaration to Park officials.

“That’s now a historic document and should be on display in Yellowstone for the public to see, along with the true story of how this name change came about,” added Chief Grier.

Chief Grier has taken issue with how the mainstream media has reported the name change, which he describes as “selective” and “close to another whitewash.” The facts of the “many years of work” should be reported, he said.

Grier emphasized that neither Yellowstone National Park nor the Department of Interior “initiated or suggested” that Mount Doane should be renamed.

The story of the Yellowstone name changes is included in the upcoming film, The Doctrine of Recovery, which features Crystle Lightning, Casey Camp-Horinek, and Juliet Langley Hayes. The film will premiere on July 5th at the Assembly of First Nations (AFN) Annual General Assembly at the Vancouver Convention Center, British Columbia.

“This has been a long fight, and I recognize the other Tribes and Tribal organizations that allied to achieve this historic victory, including GOAL Tribal Coalition, Rocky Mountain Tribal Leaders Council, Great Plains Tribal Chairmen’s Association, and the Global Indigenous Council. I offer special recognition to the Shoulderblade-Strange Owl family of Lame Deer, Montana, who were at the forefront of this effort,” Chief Grier said.

Speaking exclusively to Native News Online on behalf of the Shoulderblade-Strange Owl family, Keith Shoulderblade confirmed where the fight for the name changes and Tribal recognition in Yellowstone National Park started.

“This movement began in our family’s home over a decade ago. We welcome the decision of the US Board on Geographic Names to remove the name of a war criminal, Doane, from our sacred ancestral lands in Yellowstone National Park,” began Shoulderblade.

“My dad, the late Don Shoulderblade, and my cousin, Rain (Náhkȯxho'óxeóó'ėstse), founded GOAL Tribal Coalition for this purpose, to preserve the sanctity of our sacred lands and ways, which included leading the struggle to protect the grizzly bear. My dad was a Sun Dance Priest and Spiritual Leader, and this achievement took prayer and compassion for those who do not understand our ways. Rain wrote the historic Yellowstone Name Change Declaration signed by many Associated Tribes of Yellowstone,” Shoulderblade states.

"The Blackfeet Confederacy, the Northern Cheyenne, and all tribes from the great Rocky Mountains heard our Blackfeet sisters screams as they ran to the river on that cold January morning in 1870. We heard their cry for justice. We sought justice. We sought an accounting. We sought a reckoning with history," Tom Rodgers (Blackfeet tribal citizen), president of the Global Indigenous Council and advisor to the Rocky Mountain Tribal Leaders Council told Native News Online.

"It has taken far far too long for this journey of healing to arrive. We petitioned our government to do what is right and what is moral. Finally hope and history rhyme. We can now turn to the 200 women, children and to the elders who were massacred on that day and say…."may your souls be at peace and may the hands of sisters Death and Night incessantly wash again and ever agin, this soiled world."

“In 2014, GOAL Tribal Coalition secured a resolution from the Rocky Mountain Tribal Leaders Council to support the removal of Doane’s and Ferdinand V. Hayden’s names from the sacred lands now known as Yellowstone,” affirmed Tom Rodgers, President of the Global Indigenous Council. “This is momentous for all Tribal peoples, and particularly for the Piikani, who were the victims of Doane’s barbarity. As a Blackfeet, I say to my Blackfoot Confederacy brothers and sisters, we did it. The name of a war criminal, Doane, is gone,” said Rodgers.

In Western lore and Yellowstone National Park history, Lieutenant Doane is celebrated as “the man who discovered Wonderland” for guiding the 1870 expedition that was instrumental in Yellowstone becoming the world’s first national park. However, seven months prior to that, Doane led the massacre of the Piikani (Piegan) camped with Chief Heavy Runner on the Marias River in northern Montana.

“I was the first and last man in [the] Piegan camp January 23, 1870,” Doane wrote in his 1889 application to become superintendent of Yellowstone National Park. “Greatest slaughter of Indians ever made by U.S. Troops,” Doane continued.

Of the 173 recorded victims, US authorities admitted that only 15 were men of fighting age, the rest were elders, women, and children. “None older than twelve years and many of them in their mother’s arms,” reported Indian Agent W.A. Pease. Doane subsequently ordered the Piikani prisoners to be executed with axes.

“This is a great victory for all Tribal people, not just for our family and our tribe, the Northern Cheyenne. In removing the name of Doane, we not only honor the Piikani victims of the Marias River Massacre, but the victims of similar war crimes at Sand Creek, Wounded Knee, Bear River, and so many more. Our family is honored that this is now part of our father’s legacy,” concluded Keith Shoulderblade. “This name change is long overdue. We all agreed on ‘First Peoples’ Mountain’ as an appropriate name to honor the victims of such inhumane acts of genocide, and to also remind people of the 10,000-year plus connection Tribal peoples have to this sacred place now called Yellowstone,” explained Chief Grier.

“Unless they are localized and made to enter upon agricultural and pastoral pursuits they must ultimately be exterminated. If extermination is the result of non-compliance, then compulsion is an act of mercy,” Hayden wrote in the report cited by Grier. “

That is advocacy for genocide with no plausible deniability. Like Doane’s, Hayden’s name has no place in Yellowstone. We repeat our call for Hayden Valley to be renamed Buffalo Nations Valley in honor of all Tribal Nations that have treaty rights and interests to Greater Yellowstone, and an ancestral connection to this sacred landscape and our relatives, the Buffalo Nation,” the Chief Grier concluded.

In a press release, the Park administration declared, “Yellowstone may consider changes to other derogatory or inappropriate names in the future.”