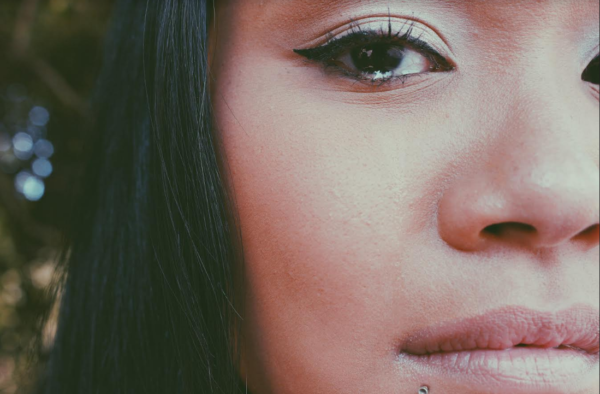 It has been said that red is a color that transcends the physical world and calls to the ancestors in the spirit world.

For ceremony and pow-wow, Native Americans dressed their children in red as an introduction to the ancestors — calling upon them as guardians to the young. However, the color red had other uses and symbolic meanings that differ among Indigenous tribes in North America. It has been used by the young warrior painting his face and his horse and it has also been used to beautify the faces of young women and their clothing. Today, the role of red is being used to call attention to the invisible — missing and murdered.

Wearing Red on May 5

May 5 has been commemorated as the National Day of Awareness for Missing and Murdered Indigenous Women and Girls. Across the nation, we are called upon to wear red to acknowledge thousands of young women and girls who go missing each year without so much as a search party.  Topping a long list of reasons why law enforcement officials are unable to respond in a timely manner are being underfunded, short-staffed, and jurisdictional issues between Native and non-Native judicial systems.

A Crack in the Landscape of Justice

Native Americans know that there is a crack in the landscape of justice. The underlying issue of not having jurisdictional authority over non-Natives living on Native-owned land sends a powerful message of being untouchable. It’s a flaw in the judicial system that appears to be rigged against Native women and in favor of non-Native men — a gaping loophole that has allowed thousands of missing and murdered women and girls to be ignored.

According to the National Crime Information Center, 5,712 American Indian and Alaska Native women and girls were reported missing in 2016 alone, but only 116 of those cases were logged with the Department of Justice. According to the National Institute of Justice, 84 percent of Native women experience violence in their lifetimes, and 56 percent experience sexual violence. Of those victims who experienced sexual violence — an astounding 97 percent were victimized by non-Native perpetrators.

The fact that Native women are being murdered at a rate ten times higher than other ethnicities and a majority of these murders and violent acts are committed by non-Native people on Native-owned land makes the injustice that much more scathing. These higher rates of violence against Native American women are in no small part due to federal law limiting tribal court’s jurisdiction to criminally prosecute non-Native people who commit crimes on tribal lands.

In December 2018, retiring Republican representative Bob Goodlatte used one of his final days in office to block a law addressing the disturbingly high number of missing and murdered Native American women in the U.S. The bill, Savanna’s Act, had unanimously passed in the Senate before it was delayed in the House Judiciary Committee, of which Goodlatte was chair. Savanna’s Act would have formalized coordination between the government agencies that manage investigations into Missing and Murdered Indigenous Women (MMIW). It would require annual reports to Congress on the issue from those agencies, and it would grant tribal agencies access to federal crime databases that could help to resolve these crimes.

In May of 2019, U.S. Representatives Norma J. Torres (D-CA), Dan Newhouse (R-WA), and Deb Haaland (D-NM) reintroduced Savanna’s Act, a bill named in honor of Savanna  LaFontaine-Greywind, a 22-year old pregnant member of the Spirit Lake Tribe who was tragically murdered in August 2017.

The bill passed the Senate with an amendment on March 11, 2020. It was sent and received by the House on March 12, 2020, and shows to be “held at the desk” meaning it is available for immediate consideration. A bill passed by one Chamber and referred to the second Chamber often is held at the desk in the second Chamber, particularly when the second Chamber already is working on similar legislation. Although this bill has not yet passed, these are important steps in the right direction for relatives seeking justice for their missing and murdered women and girls.

StrongHearts Native Helpline is a free, culturally-appropriate and anonymous helpline for Native Americans and Alaska Natives impacted by domestic violence and dating violence. For more information, contact StrongHearts at 1-844-7NATIVE daily from 7 a.m. to 10 p.m. CST. As a collaborative effort of the National Domestic Violence Hotline (The Hotline) and the National Indigenous Women’s Resource Center, after-hour callers can connect with The Hotline by choosing option one.