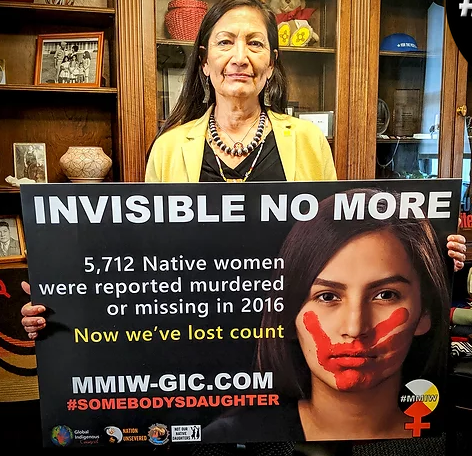 #MMIP: To recognize, Missing and Murdered Indigenous Persons Awareness Day, on Thursday May 5, Secretary of the Interior Deb Haaland (Laguna Pueblo) and Deputy Attorney General Lisa Monaco will host a virtual event to highlight the Not Invisible Act Commission.

The Departments of the Interior and Justice are working to implement the Not Invisible Act, sponsored by Secretary Haaland during her time in Congress. The law established the Not Invisible Act Commission, a cross jurisdictional advisory committee composed of law enforcement, tribal leaders, federal partners, service providers, family members of missing and murdered individuals, and most importantly — survivors.

In addition to Secretary Haaland and Deputy Attorney General Monaco, the event will feature three panelists who will discuss the Missing and Murdered Indigenous Peoples crisis and the importance of the Not Invisible Act Commission in the collaborative efforts to address the crisis.

The live event will begin at 2:30 PM ET on Thursday, May 5. Members of the public may view the event at the Interior Department’s website.