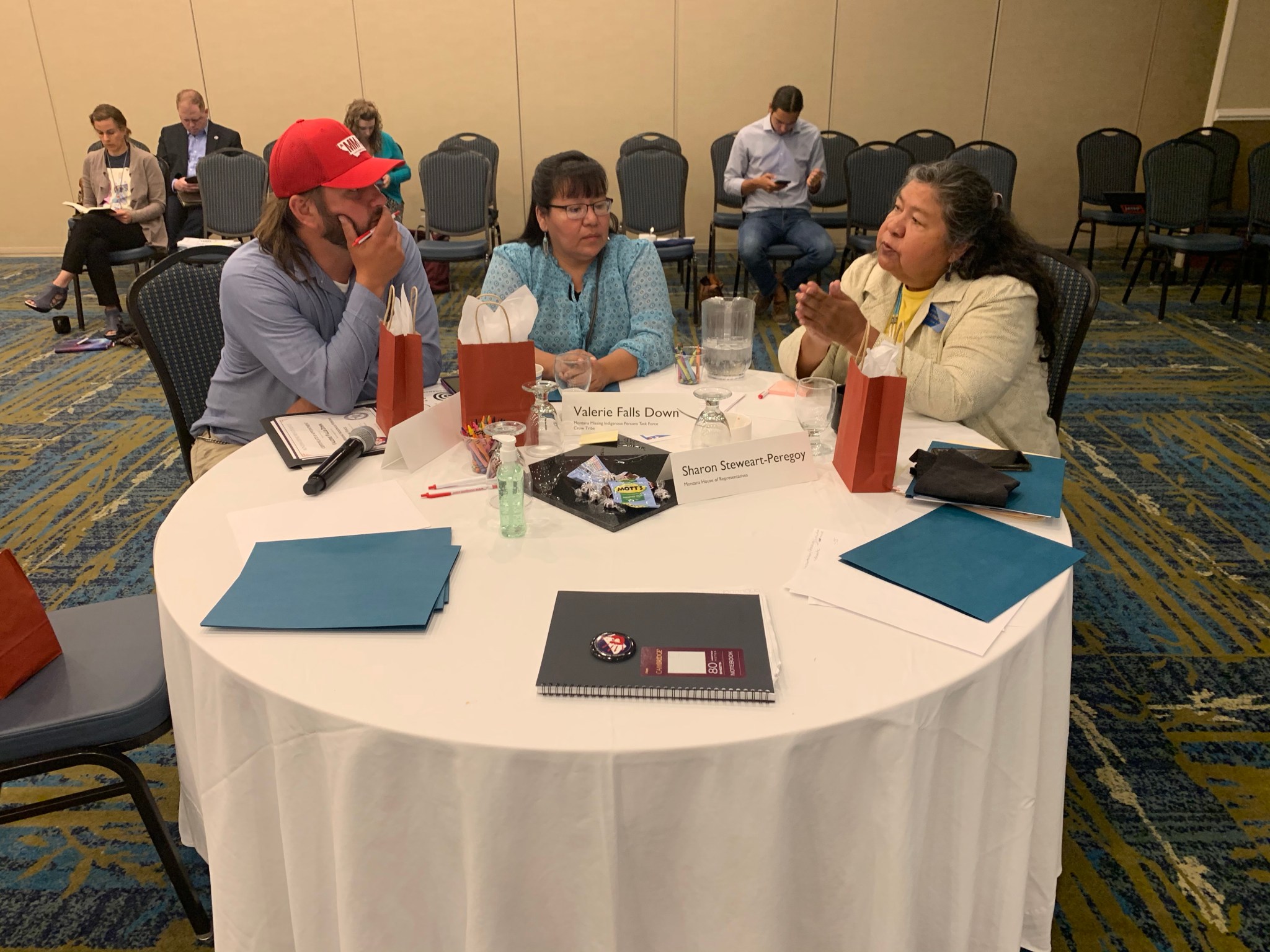 With funding to continue the Montana task force through the next biennium, stakeholders are strategizing incremental improvements to an intractable problem.

The Montana Missing Indigenous Persons Task Force, originally created in 2019, was reauthorized by the state Legislature this year and received $10,000 to operate through the biennium. Representatives from tribal nations have been working with state and federal law enforcement advisers to pinpoint gaps in the system when someone is reported missing.

“Particularly in Indian Country, and we heard over and over again, and we know as individuals, that the longer you wait, the evidence and trying to find an individual gets harder,” said Rep. Sharon Stewart Peregoy, D-Crow Agency, who sponsored the bill to reauthorize the task force this session. The long-time legislator is also a member of the State Tribal Relations Interim Committee, which began to study the missing persons crisis in 2017.

In Montana, Native Americans make up roughly 26% of missing persons cases but account for less than 7% of the state’s population — making them four times as likely to go missing as other residents. Roughly 80% of Native Americans reported missing between 2017 and 2019 were minors, some of whom went missing more than once.

For many of the meeting’s attendees hailing from reservations, the recurring tragedies hit close to home. Ashley Loring Heavyrunner disappeared from the Blackfeet reservation in 2017 and has yet to be found. Jermain Charlo, a member of the Confederated Salish and Kootenai Tribes, was last seen in Missoula in 2018, and her current whereabouts are unknown. Kaysera Stops Pretty Places, age 18, was found dead in August 2019 just off the Crow Reservation. In 2020, family and friends grieved the loss of Selena Not Afraid, whose body was found near a rest stop between Billings and Hardin.

At the meeting, task force members tried to drill down on the underlying factors that may push a person to leave home or make them vulnerable to bad actors, including unstable or dangerous living conditions, substance use, family disputes and poverty.

The depth and complexity of those issues can make the missing persons crisis feel overwhelming. Members of the task force say the effort is justified if it helps even one person and their family.

“The planning you are undertaking today and tomorrow gives families the confidence that, should the worst happen, Montana will leave no stone unturned,” Gov. Greg Gianforte said in remarks to the task force on Wednesday.

“Words fall short of describing the difficulty of working in this space,” he said. “There are people whose names and faces that we will never forget. They motivate us every day to act to curb this crisis. Their families, communities, are really counting on us to do this.”

The MMIP task force, which operates within the Montana Department of Justice, is responsible for analyzing the sweeping structural bureaucracy that is supposed to respond to a missing person case in Indian Country.

Members of the group are tasked with finding better ways for tribal, local, state and federal agencies to communicate and collaborate on reporting and investigating missing persons cases, focus on causes that contribute to those cases, and make recommendations to tribal nations on how to reduce missing person incidents. The task force also awards a competitive grant to a tribal entity to create a central emergency reporting and alert system that can be initiated when a missing person is first reported — a system that will eventually be replicated among all tribal nations in the state. 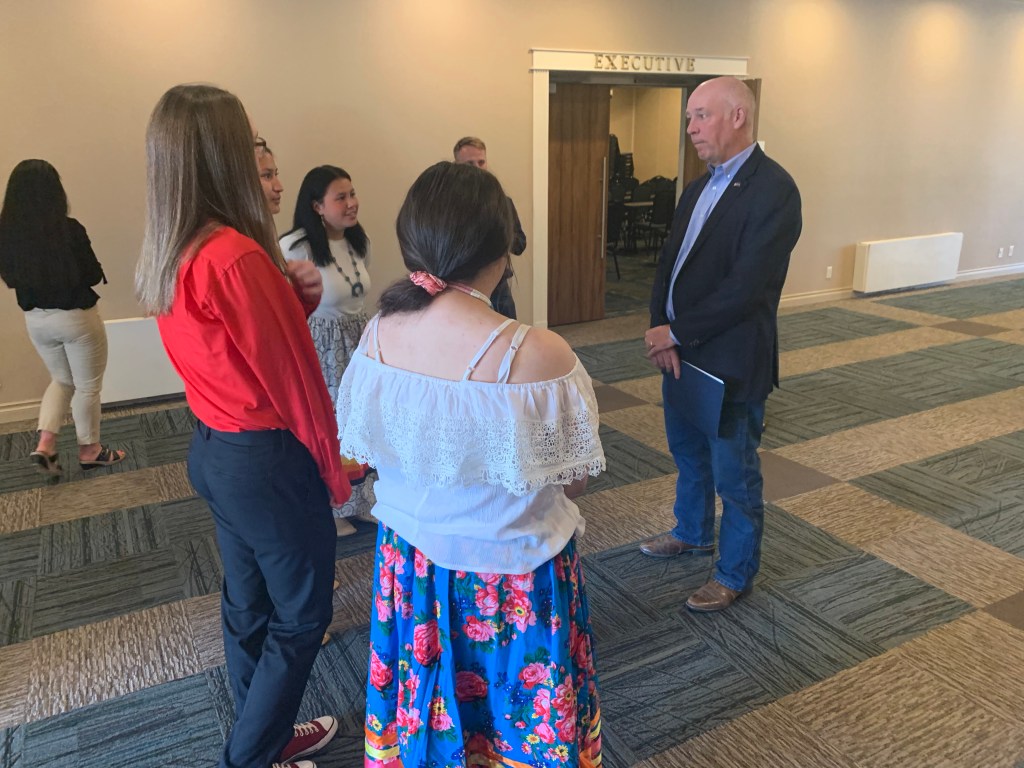 Gov. Greg Gianforte speaks with students after the MMIP task force meeting. (Credit: Mara Silvers / Montana Free Press)In 2020, the task force released a report to a legislative interim committee on its work and findings, including input from tribal members gathered during listening sessions across Montana. Community members described unreliable responses from law enforcement officials when a person is reported missing and the persistent feeling that the concerns of family and friends aren’t taken seriously. Frustrations also focused on sprawling and disjointed systems for reporting and tracking missing persons cases, much of which isn’t accessible or easy to navigate.

The task force recommended several policy changes last year that could help tribal nations and law enforcement officials overcome those hurdles: the creation of Missing Persons Response Teams, including family liaisons and a coordinator who is familiar with state and tribal response systems, adding investigators, and training search and rescue teams to assist when an incident is reported. The group also proposed creating a review commission that can look over past cases for gaps in communication and cooperation and suggest ways to prevent those mishaps from happening again.

Those policy proposals, adding to previous years of legislation, saw mixed results during the 2021 legislative session. While bills extending the task force itself and establishing the review commission were signed into law, MMIP advocates could not convince enough lawmakers to support House Bill 36, which would have instituted a grant-based program to help train local, multi-jurisdictional emergency response teams for missing persons cases.

Another bill to provide emergency shelter to unaccompanied and runaway minors without a parent or guardian’s permission also failed to advance through the legislative process, dying by one vote after a dramatic committee debate.

The wins and losses during the session were acknowledged during the task force’s meeting in Helena. Attendees nonetheless kept returning to a tone of positivity, both toward the bill that extended the task force for another two years and for the dedication of the volunteers and advocates gathered in the room.

“The great work that you did, holding the hearings, holding and interfacing with the community members and talking to the families and having the families also tell their stories, is important,” said Stewart Peregoy. “And that — we cannot lose that part of it. Although it’s hard, we have to keep moving forward.”

Much of the two-day meeting was spent discussing how to better protect and support Native communities to prevent people from going missing in the first place.

A panel of students from Ronan High School spoke about their experience with peers who have left home for various reasons. For some young people who have a falling out with family, the students said, the goal is not to stay away forever.

“A lot of the time, it’s not whether a kid wants to come back, it’s whether they feel welcome to come back,” said Areanna Burke, 17, a rising senior.

If a young person doesn’t feel like they can return home, another student said, they may not feel safe staying with other friends or family either.

“Sometimes when people run away they feel like they have no one to trust,” said 16-year-old Brett Myers. “And so I’ve heard of instances where sometimes people are sleeping on the streets because they don’t have a place to go.”

The student input sparked ideas for how to engage more young people at the community level and broaden support systems for those who are struggling or in a tenuous situation. Several task force members and members of the public raised the idea of creating safe houses for young people seeking emergency shelter, even if they just need a place to decompress for a night, an idea that overlaps with the bill that failed to pass this year. 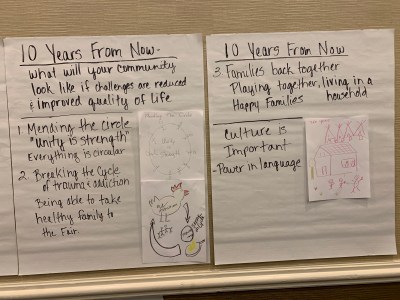 A list of goals and priorities drafted in June, 2021 by the Montana Missing Indigenous Persons Task Force. (Credit: Mara Silvers / Montana Free Press)Other discussions centered on how to build trust with law enforcement, a key relationship that could help community members seek help before a situation takes a turn for the worse. Having well-resourced and properly trained law enforcement officers, attendees said, could encourage people to come forward sooner when there’s an incident to report.

The conversations about prevention eventually evolved to specific proposals about how communities can become better equipped to respond when a person goes missing. With all tribal nations in Montana operating under their own systems and protocols, task force members often circled back to the problem of inconsistency and the difficulty of implementing best practices.

Ideas that will carry over to the task force’s next meeting included increasing tribal engagement with MMIPMT.com, the portal created by members of the Blackfeet Nation through a grant provided by the task force; creating a search and rescue protocol in coordination with Disaster and Emergency Response teams on each reservation; and broadening educational campaigns about what factors can contribute to missing persons and how community members can navigate the reporting process with law enforcement.

For task force members, a handful of whom have been involved since 2019, much of the information discussed in Helena may not have been new. And yet, members appeared dedicated to continuing efforts to mend inadequate systems. In the long term, members said, strengthening prevention and response protocols will make everyone feel more safe, even if the path forward is fraught with complications.

In other words, seeking solutions, even incrementally, is the best thing the task force can do.