Minnesota Supreme Court Blocks Mine in Northern Minnesota; Seen as a Victory for Tribes

SAINT PAUL, Minn. — On Wednesday, April 28, the Minnesota Supreme Court blocked a critical permit for the controversial Polymet copper-nickel mine in northeastern Minnesota. The denial affirms a lower court’s decision on January 13, 2020 that required the company to gather more information on the potential environmental impacts of the mine and to impose a fixed term on the permit to mine. 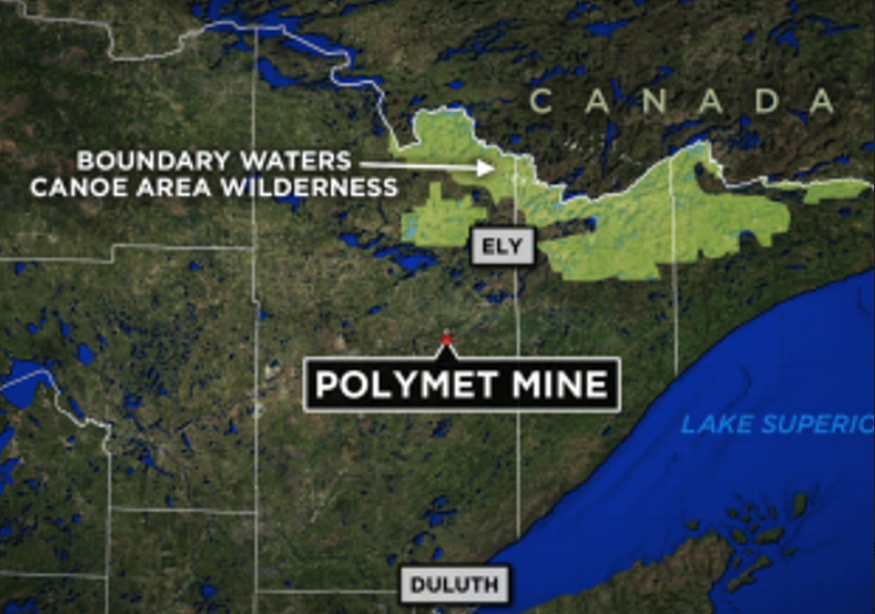 “The denial of the Polymet permit is a huge win for the water and for future generations,” Ginew Collective founder and attorney Tara Houska said to Native News Online. “Polymet now has to restart or abandon its attempt all together and I hope its shareholders are listening.”

Poly Met Mining, Inc. is a subsidiary of PolyMet Mining Corp., a publicly-traded mine development company known as “PolyMet”. According to the company’s website,  the mine aims to extract copper, nickel and other metals from the NorthMet ore body, located near Hoyt Lakes, Minn., using modern, responsible and sustainable practices. The NorthMet ore body is a deposit of minerals located in northeastern Minnesota contained within the geological region known as the Duluth Complex, near to the Bois Forte Band of Chippewa, the Fond du Lac Band of Lake Superior Chippewa, and the Grand Portage Band of Lake Superior Chippewa.

All three tribes have opposed the mine and were unavailable for comment as of press time.

On January 7, 2017, the United States Forest Service issued a decision to approve a transfer of the federal lands to PolyMet, a move that was opposed by the National Congress of American Indians (NCAI). NCAI passed a resolution opposing the legislative transfer of federal lands for the development of the proposed PolyMet mine in October 2017 in Milwaukee, Wisc.

“Our courts are paying attention to its own laws rather than giving agencies a blank check,” said WaterLegacy Advocacy Director & Counsel Paula Maccabee to Native News Online. “The decision to deny Polymet’s permits means they have to start all over again to try to get a permit for a low-grade mine.”

Polymet’s permit would allow the company to unearth more than 900 acres of wetland. The Fond du Lac Band of Lake Superior Chippewa cited the Clean Water Act of 1972 using the downstream state clause where discharge cannot have a "detectable" impact on its waters in its opposition to the mine.

According to WaterLegacy, the PolyMet sulfide mine would threaten clean water, destroy wetland and forest habitats, impair the health of downstream communities, exacerbate climate change, and create financial liabilities for taxpayers throughout Minnesota. “We don’t believe that the proposed Polymet mine would be financially feasible for Minnesota,” said Maccabee. Tribal science and concerns were not addressed in Polymet’s environmental impact statement’s process, according to the organization.

WaterLegacy is an award-winning grassroots non-profit 501(c)(3) organization formed in 2009 to counter the threat of sulfide mining proposed for Northern Minnesota. The organization’s work has focused on preventing pollution and destruction from the PolyMet mine, which is Minnesota’s first proposed copper-nickel sulfide mine.

There’s no question that the Minnesota Supreme Court decision was a major setback for Polymet says Maccabee. The company is now owned by Swiss multinational commodity trading and mining company Glencore and plans to reapply for permits to mine in northeastern Minnesota.

The court on Wednesday also ordered the Minnesota Department of Natural Resources to conduct a “contested case hearing” to gather more evidence on whether the mine’s waste basin would prevent acid mine drainage and keep pollution contained. A contested case hearing is a trial-like public hearing administered by a judge or an attorney to gather evidence from those wishing to publicly comment on the project.

Polymet says the mine would create hundreds of jobs while supplying metals that the U.S. economy needs.

“We deserve good-paying jobs in northern Minnesota that don’t require us to destroy our own watersheds and I hope Minnesota is listening,” Houska said.