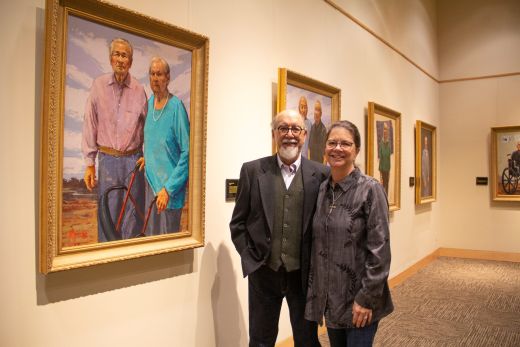 “Listening to Our Elders” is on display in the Aaittafama’ Building on the campus of the Chickasaw Cultural Center.

“Our elders are a national treasure, and this project is one way we can celebrate and honor them,” Chickasaw Nation Governor Bill Anoatubby said at the beginning of the commissioned project. “Mr. Larsen is doing a tremendous job of capturing the strength of character, intense spirituality, superb sense of humor and other honorable characteristics exhibited by these unique individuals.” 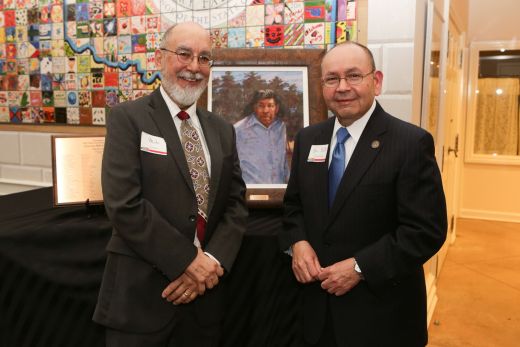 Larsen and his wife, Martha, spent two years producing this third set in the series, which began nearly 15 years ago and now includes 72 portraits.

“I want people to recognize this incredible heritage we have right here. That’s why we have been so excited about doing these paintings,” Larsen said. “I have these people for such a short time. An hour is not long. But now we have these to look at, so you can have as long as you want. You can see them, read about them, and make some contact with these people.”

Larsen said each painting takes approximately two weeks, including travel, spending time with each elder, planning the painting from rudimentary sketches and stretching his own canvas – all before charcoal and paint emerge to begin the work.

During visits, Larsen sketches on paper while conversing. Martha takes record of the elder’s words and captures photographs. The goal is to thoroughly explore their stories, then accurately portray them so future onlookers can know them as well.

“You capture a person’s soul in their portrait. You can paint some of these people off looking at things, doing other things. But you look into their eyes – which is the first thing I draw when I’m sketching somebody – that’s where your personality is, your persona, your being,” Larsen said.

From the onset, Larsen was determined to feature living elders. He wanted to be able to create a portrait which looked exactly like the person. This required getting to know them.

Such an endeavor came to have a deeper, personal meaning for Larsen. He could uncover his own heritage.

Gathering up a heritage

“It’s a very personal thing that they allowed me into their homes, into their thoughts, into their history,” Larsen said. “I gather so much from these paintings. It’s difficult to explain. It is a gathering together, like in a basket, what my history is.”

Larsen said he was not raised as a Chickasaw – the result of his father’s rejection of his own heritage.

“It wasn’t until Martha and I came here and started getting involved with Chickasaw people that I realized what I had. Doing these paintings really is an aid to me, to get me involved, get me immersed, get me into my history,” he said.

“The memorable part of this adventure is being so close to history and being able to present it in a way that everyone can see it,” Larsen said. “I look at these paintings and revisit the short time we were able to be with these people and listen to my own history.”

While revisiting the portraits on the Chickasaw Cultural Center campus for the first time since completing them, Larsen perused the exhibit and recalled his experiences with the subjects of his paintings.

“We interviewed (Lilian Underwood) outdoors in a shady area; it was really nice. She was fanning herself because it was summer. I just asked her, if we were your grandchildren, what would you tell us? She bowed her head, fanned herself, looked up and said, ‘Listen to your elders.’ She was so perfect. It was a wonderful interview and turned into a really fine painting.”

Walking from painting to painting, noticing his depiction of a woman wearing a beaded medallion seated in a rocking chair, another experience popped into Larsen’s mind.

“Sue Simmons is really important to us. Sue, Miss Simmons, really worked hard to make sure everybody knew she was Chickasaw,” Larsen remembered. “She went to dances and wore things that said Chickasaw. She wanted everybody to know how proud she was, and she exhibited it in her daily life.”

He recalled the moment Simmons was finished being photographed during the Larsens’ visit to her house. She sat down in her favorite chair, crossed her legs and started talking. A lot of what she had to say to the Larsens was expressed through Simmons’ hands with emotive gestures. It is the moment he captured in her portrait.

After Simmons’ portrait, Larsen stopped to look at the portraits of William and Homer Paul and did not seem to want to walk away. Larsen then turned around and asked, “You know who William and Homer are, right? Their family, back in Indian Territory days, established Pauls Valley. They were both in the Marines at the same time and retired as full colonels. After we did the painting of them together, we discovered William Paul still had his uniform. That uniform fits either one of them. So we went to their home and photographed them in the uniform and did two separate paintings, one of each.”

The Paul brothers inspired extra portraits which can be seen at the Chickasaw Nation Veterans Lodge, located at 1909 Warrior Way on the Ada South Campus.

With his time getting to know his fellow Chickasaw elders, Larsen uncovered some commonalities.

He said they all went through the same period of time in history. They were all poor in early life; they all expressed a great faith, and, when in their presence, there is a feeling of absolute peace.

“So many of these people didn’t have that for a large portion of their life until they became older,” Larsen said. “That’s not a shame, just the way things are. I would wish for something different for them, but they lived through it, survived it, they prospered and became wonderful parents and grandparents. Why ask for more?”

He also noticed a repeating phrase while speaking with them. “‘I am so proud to be Chickasaw.’ They all say that. It is a great thing which gives them confidence, and that confidence comes through in the paintings.”

Two books of Larsen’s elders portraits, “They Know Who They Are” and “Proud to Be Chickasaw,” have been published by the Chickasaw Press.

Together, these volumes feature all previous elders painted by Larsen. To offer more insight into the paintings, each is accompanied by a short biography written by Martha Larsen and Jeannie Barbour, creative development director for the Chickasaw Nation.

Currently in the works at Chickasaw Press is “Listening to Their Elders: Elders of the Chickasaw Nation, Volume III” by Mike and Martha Larsen and Michelle Cooke, senior staff writer for the Chickasaw Nation Division of Culture and Humanities. The book will complement the third set of portraits. For more information, visit ChickasawPress.com, or call (580) 436-7282.

About The Author
Author: Chickasaw Nation MediaEmail: This email address is being protected from spambots. You need JavaScript enabled to view it.