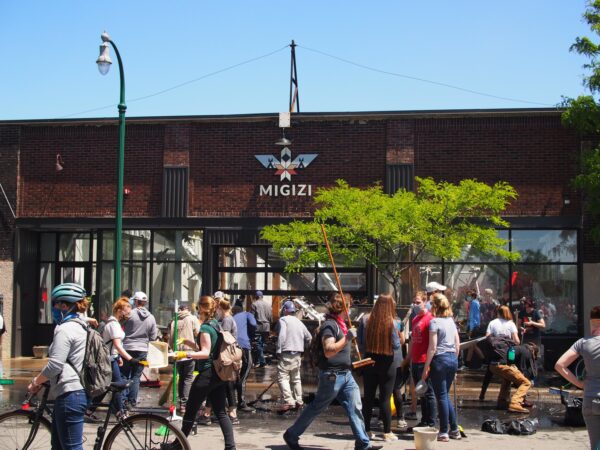 MINNEAPOLIS—On the early morning of May 29, Migizi Communication staff scrambled to save what they could from the burning flames that consumed its building during the George Floyd riots. The fires spread from building to building, leaving Migizi caught in the middle and leaving its 40-year legacy in uncertainty.

Migizi’s current and former executive directors, Kelly Drummer (Lakota) and Laura Waterman Wittstock (Seneca), were seen comforting one another outside of wreckage while wearing their facial masks and keeping their distance.

Nearly a month later, the surrounding community and online supporters are proving that compassion and determination can turn seemingly impossible circumstances around. 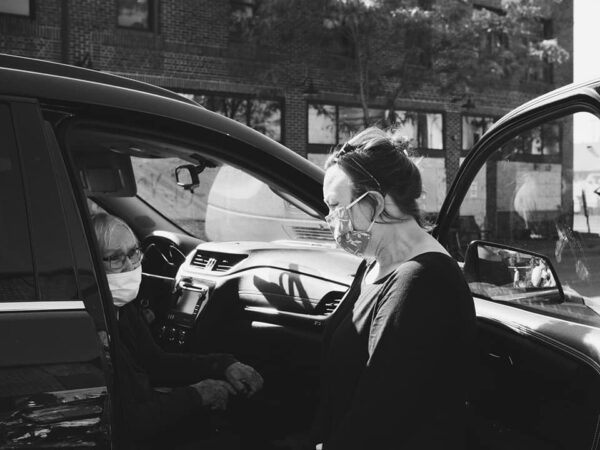 Migizi’s former and current executive directors, Laura Waterman Wittstock (left) and Kelly Drummer (right) were seen comforting each other outside the wreckage. Migizi Communication is a youth-based nonprofit that provides resources, access and support for Native youth to explore their creativity and educational opportunities to become self-sufficient and contribute to social change.

The day following the fire, supporters and neighbors flooded the streets to clean up the wreckage. The Migizi Facebook page posted videos and photos showing the care and comradery of its neighbors, despite increasing racial and social tensions within the city.

“We have had hundreds of hundreds of people helping us clean out and take out the things that survived, which is a miracle,” said Kelly Drummer, Migizi executive director, according to a May 30 post. “The outpour is just amazing. I just can’t believe it.”

As part of a healing ceremony and community appreciation, Migizi hosted a Healing + Unity event outside the building’s ruins on June 5. Crowds socially distanced in the street as eyewitnesses shared their stories, healing songs were sung, and prayers went out to ancestors.

Migizi’s Facebook page says, “We were so glad to have seen so many people come join us as a community. We sang, cried, laughed, and ate some delicious food donated by our community organizations and people.”

Relatively new to the neighborhood, Migizi’s recently constructed building has only been in use since July 2019. Previously, the center was housed in independent office spaces around Minneapolis and relied on funding and donations from corporate and church sponsors. Now, the organization is reaffirming its commitment to youth and rebuilding to create a safe and sacred space.

Wittstock, who founded Migizi (“bald eagle” in Ojibwe) in 1977, served 27 years as its executive director. Her vision to train young journalists to dispel misconceptions of Native culture in the media transformed into other cultural and educational programs, including Native Academy with the goal to increase the number of graduating postsecondary education Native students.

“I see potential in every Indian kid… The potential is there if we give them a chance,” Wittstock said. 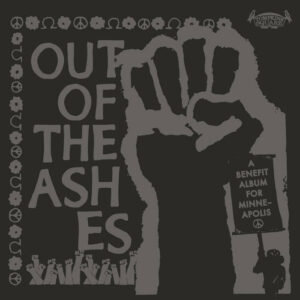 A benefit album of local Minnesota artists will help fund the rebuild efforts for Migizi. Amidst the chaos, the organization still offers online programming and services including student appreciation boxes of cedar and sage, online cultural sessions known as Medicine Mondays and summer program set for early July.

In efforts to fund the rebuild, Migizi continues to find willing donors among the online community.

To date, Migizi has raised $656,249 through nearly 13,500 donors. With four ways to contribute and through a partnership with Tompkins Square Radio, supporters can also buy a curated album entitled “Out of the Ashes: A Benefit Album for Minneapolis,” which features local Minnesota artists.

To get involved or for more information, visit the Migizi website here.