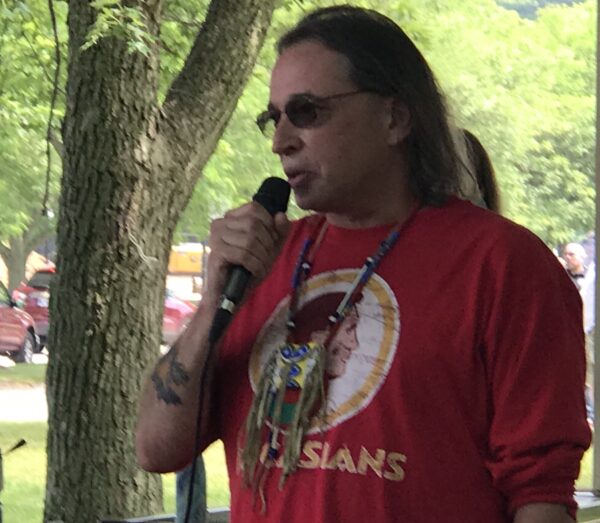 ALLENDALE, Mich. — A two-year old movement to take down a confederate statue near a Western Michigan university has gained momentum, despite the ongoing COVID-19 pandemic.

“People are worried about the coronavirus, but we have a bigger disease to worry about which is racism,” Terry Frechette, the leader of the West Michigan chapter of the American Indian Movement (AIM), said at a protest to support the removal of a Confederate statue in Allendale, Mich. on Saturday afternoon. 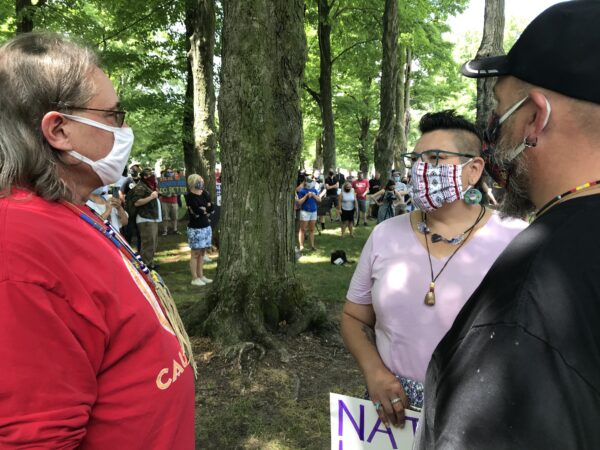 Frechette was one of several speakers who took the microphone at the Allendale Community Park, not far from the main campus of Grand Valley State University. The protest drew some 200 people and a smaller crowd of counter protesters who openly carried assault weapons.

“I have been a resident of Allendale for the past 10 years and I support taking down the statue,” Frechette told the crowd. He took the opportunity to tell the protesters about other concerns American Indians are facing, such as the fight against pipelines near tribal lands and missing and murdered Indigenous women.

“I don’t why the statue was put there in the first place,” Frechette said. “I know there are other demonstrators here on the other side. I want to see this be a peaceful protest.” 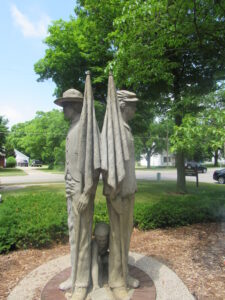 The statue with the Confederate soldier has become controversial in recent weeks. The Allendale Township board is expected to vote on the issue on Tuesday evening.

Erected in the late 1990s, the Confederate statue stands back-to-back with a Union soldier with a small Black child beneath them holding a scroll that reads “Freedom to Slaves.” The three-person memorial represents the Civil War that is part of the Veterans Garden of Honor section of the park that honors military men and women, beginning with the American Revolutionary war.

While the movement to remove the Confederate statue gained momentum in recent weeks after the death of George Floyd at the hands of Minneapolis police officers, organizers of Saturday’s protest say they have been seeking its removal for two years.

Prior to comments by several speakers, the Civil Rights Movement anthem, “We Shall Overcome” was played over the public address system with protesters singing along, followed by “We Are the World.”

Protest organizers plan on attending the township meeting on this coming Tuesday evening to urge for removal of the statue where the township board is expected to vote on the issue to keep the statue or take it down.

On Friday, Grand Valley State University President Philomena V. Mantella sent a letter to Allendale Township Adam Elenbaas urging the removal of the statue and moved to another location.

“First, given the discord between the statue’s educational value and its symbolism, I would request consideration of relocating it within the township to a space that would allow for proper historical context and dialogue,” Mantella wrote in her letter.

Allendale, located 12 miles west of downtown Grand Rapids, is a growing community with a population of 26,000 people. Grand Valley State University officials say students and faculty add 10,000 to the population.

Frechette was joined by about a half dozen other American Indians, who showed their solidarity with the organizers, at the protest.