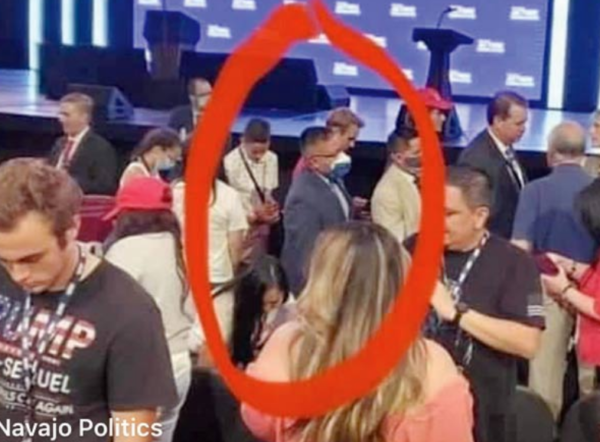 PHOENIX — Navajo Nation Vice President Myron Lizer was roundly criticized on social media Tuesday for attending a “Students for Trump” event in Phoenix on the Navajo Nation’s tab, but Lizer said Wednesday he used the event as an opportunity to corner some key congress people.

He said he wanted to keep the Navajo Nation in the forefront as the Nation lobbies for an extension of the deadline to spend the $714 million it recently received from the federal government in coronavirus relief.

Lizer caught flak from what he calls the “armchair generals” on Facebook and Twitter for disregarding his own “stay home, stay safe, save lives” mantra, violating the Navajo Nation curfew and putting himself at risk for catching the coronavirus. In a telephone interview with the Times he disputed all those criticisms.

“The (Navajo Nation) president and I have been in hotspots all over the Navajo Nation delivering supplies,” he noted. “Chilchinbeto, Kayenta, Chinle … and nobody batted an eye.” Actually, some people did bring up the fact that the president and vice president probably shouldn’t both be in hot zones at the same time, and since then, “I’ve stayed home and let the president do most of the deliveries,” Lizer said. “In fact, I have been staying home,” he said. “Tuesday is the first time I’ve gone anywhere in a long time.” 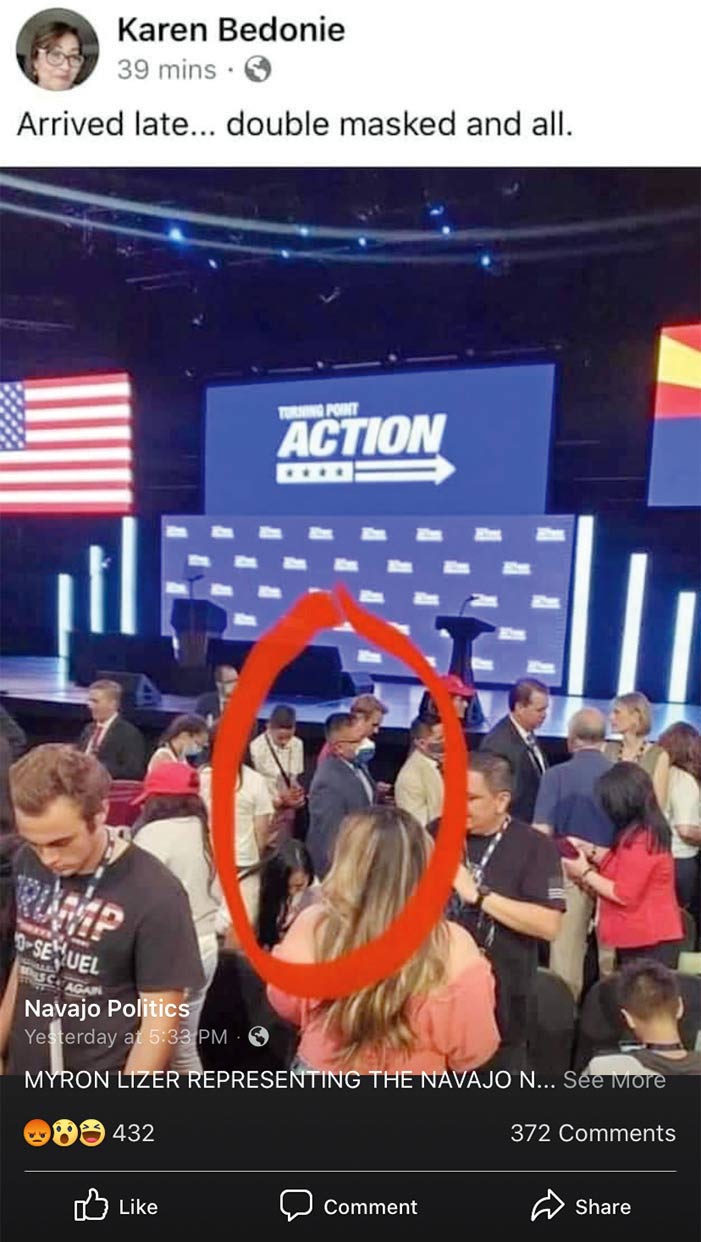 Courtesy photo This photo of Vice President Myron Lizer at a Trump event in Phoenix circulated widely after first appearing on Karen Bedonie’s Facebook page. Some posters criticized the vice president for misuse of tribal funds and potentially spreading the virus.

While many attending the Trump event at a Phoenix church were unmasked, Lizer said he wore both an N-95 mask and a cloth mask over that. “I took as many precautions as I could,” he said. He added that he left and returned to the Nation outside of curfew hours.

Other posts on social media lambasted the vice president, a Republican, for attending an obvious campaign event on company time, but Lizer said he had been invited to the event — which the Trump administration had billed as a presidential visit rather than a campaign rally — as the vice president of the Navajo Nation rather than as an individual. He said he spent most of the event trying to find opportunities to connect with key state and federal officials who might be able to advance the Navajo cause.

“We’re in a unique time,” he said. “All eyes are on Navajo right now. Sadly, it took a virus for people to see the issues we’re facing here, but I’m not above using it to advocate for our people. Why shouldn’t we use it for all it’s worth?”

Lizer said he was able to connect with Sen. Martha McSally, Rep. Paul Gosar, Rep. Debbie Lesko, Arizona Gov. Doug Ducey and others. “They all asked questions about Navajo,” he said.

Unfortunately, the format of the meeting (which, if you watched it, looked very much like a campaign rally) did not allow for too much one-on-one time with the high-ranking GOP members, but Lizer said he informed all of them he would like to talk with them further at some point. He plans on returning to Phoenix tomorrow (Friday) at Ducey’s invitation to watch him sign legislation regarding the state’s college endowment fund, and hopes to bend the governor’s ear on Navajo issues.

As one of very few Navajo Republicans holding high political office, Lizer says he has a “goal and a mission” to reach out to both the U.S. and Arizona administrations, where he may get a more friendly reception than President Jonathan Nez, who is a Democrat.

“People may not like it, but this is how politics works,” said Lizer. “The more we’re out there being seen, the less likely people are to forget about us.”

Asked whether both Ducey’s and Trump’s stands on the pandemic — both have been criticized for minimizing it — are at odds with that of his boss, who has taken a cautious tack for the Navajo Nation, Lizer said he stands with Nez but appreciates what Trump and Ducey are trying to do.

“Arizona had one of the strongest economies in the nation before this thing hit,” he noted. “Governor Ducey may have opened the state a little early, but he doesn’t want to completely lose the momentum the state had going. As a businessman, I certainly understand that tension.”