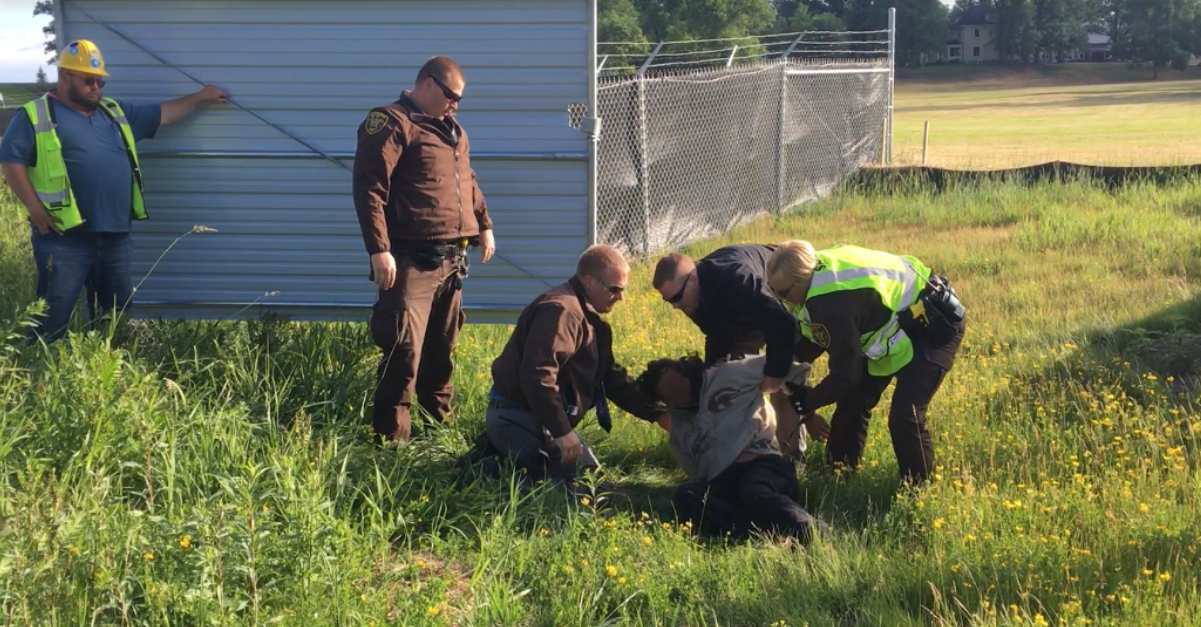 NORTHERN MINNESOTA — As construction continues on Enbridge Line 3 replacement project so does activity by those who oppose the controversial tar sands oil pipeline in northern Minnesota.

On Wednesday, several people locked themselves to equipment used by Enbridge to bore through the Straight River in Hubbard County, Minn. Also, on the same day, the Red Lake Treaty Camp was informed that the camp would be evicted by the Pennington County Sheriff’s Office and people would be arrested for trespassing on land Enbridge claims is theirs.

“I write to give notice of DNR officers and Aitkin County Deputies intentionally violating the American Indian Religious Freedom Act, Public Law No. 95-341, 92 Stat. 469 to cause fear and intimidate and interfere with our tribal member’s cultural and religious practices to protect and preserve our inherent right of freedom to believe, express, and exercise their traditional religious rites, spiritual and cultural practices,” Executive Director of the 1855 Treaty Authority Frank Bibeau wrote in a letter to Commissioner of Minnesota Department of Natural Resources Sarah Strommen and Aitkin County Sheriff Dan Guida.

“Please respect our treaty rights and obey the federal laws that protect our rights,” wrote Bibeau.

Protesters have been met with strong tactics by law enforcement. Last week, Pennington County Sheriff’s Office brought attack dogs in an effort to evict the Red Lake Treaty Camp. The use of attack dogs by private security were previously used near the Standing Rock Indian Reservation during the construction of the Dakota Access Pipeline and was heavily scrutinized by the public.

However, on Wednesday evening, the Minnesota Department of Public Safety and the Minnesota Department of Transportation rescinded a trespass order, indicating that people are not required to leave in the area of the Red Lake Treaty Camp. The Treaty Camp is an official camp endorsed and supported by the Miskwaagamiiwi-Zaagaiganing—Red Lake Nation. According to the Red Lake Band’s official monitor for Line 3 construction, Sasha Beaulieu, the Pennington County Sheriff’s Office has declared the tribe’s treaty camp an “unlawful assembly. The Pennington County Sheriff’s Office did not respond to Native News Online’s request for comment.

“Enbridge continues to violate the reserved rights under the Old Crossing Treaty of 1863, ignoring the law and preparing to drill for the Line 3 pipeline to go under the Red Lake River without a tribal monitor and consent of the Red Lake Nation,” said the Environmental Indigenous Network in a statement.

One of the main issues of protest against Enbridge’s Line 3 is that the pipeline carries tar sands under many of Minnesota’s pristine waterways. Many contend that because the pipeline’s route includes 22 river crossings in water-rich central Minnesota, the project threatens wild rice. Harvesting wild rice is a vital treaty right for the Anishinaabe tribes in Minnesota that is protected by federal law. If an oil spill were to happen in northern Minnesota, the habitat for wild rice is threatened—a risk too great for many.

Another focal point of the controversial pipeline is the project was initially approved to use 500 million gallons of water through its construction in Minn., but recent changes have been reported by opponents of the project. Currently, the project has been approved to use 10 times the initial amount, at nearly 5 billion gallons of water. According to MPR News, most of the northern half of the Midwest region is currently in a drought, but 75 percent of Minnesota is officially in drought conditions. Enbridge is currently draining rivers, lakes and other waterways in northern Minnesota in the midst of a drought and record-setting heat that has the region in extreme fire danger for the month of June.

“Our actions against Enbridge continue, as they assault and drain our rivers during a drought for their endless greed,” said Giniw Founder Tara Houska to Native News Online. “Over 500 people have been arrested since Enbridge began its Line 3 deconstruction of the sacred.”