‘Largest Investment Ever’ on Climate Change Passes Senate, Including $272.5 Million for Tribes 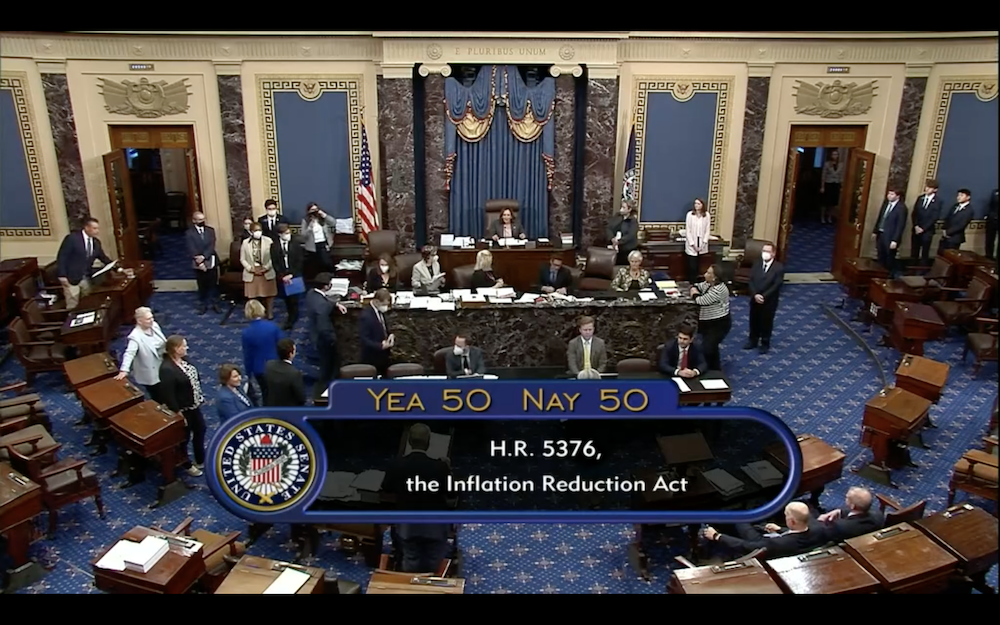 The vote split 50-50 along party lines, with Vice President Kamala Harris casting the tiebreaking vote to pass the bill. The vote clears the way for the legislation to move to the House, which Speaker Nancy Pelosi (D-CA) said will pass the bill this Friday.

In a statement praising the bill’s passage, the Navajo Nation said the $272.5 million includes:

President Joe Biden urged the House of Representatives to pass the bill as soon as possible, and said he looks forward to signing “the largest investment ever in combating the existential crisis of climate change” into law. A preliminary report from the REPEAT Project on Thursday estimated that the act would lower greenhouse gas emissions enough to cover over two-thirds of the remaining work needed to reach the nation’s climate goal: cutting 2005 emissions levels in half by 2030.

“The action taken today demonstrates a renewed respect for Mother Earth and our waters and will focus attention and critically needed resources on alleviating the impact of climate change and transitioning to clean energy,” National Indian Health Board Chairman William Smith (Valdez Native Tribe of Alaska) said in a statement.

Some environmental organizations have criticized the bill, saying it caters too much to the fossil fuel industry. The Indigenous Environmental Network said it “is NOT a climate bill.”

“...We know all too well that our Tribal Nations and communities are at the forefront of experiencing devastating climate change impacts and are historically harmed by environmental injustice, extraction, and pollution on our lands and waters,” NDN Collective wrote. “While we support many of the investments towards strengthening climate resilience and adaptation, we must also express our strong disappointment in the provisions that tie renewable energy development to oil and gas leasing. We know the resources are there to invest in a swift and just transition away from fossil fuels.”

The bill would have a negligible impact on inflation in 2022, the Congressional Budget Office predicted on Thursday. It would probably cause inflation to rise or fall by a tenth of a percent in 2023, the CBO said, and the office hadn’t evaluated the bill’s potential effects on inflation after 2023.

In the days before the bill was finalized, the office also estimated that the bill would cause a net decrease of $102 billion in the deficit between 2022 and 2031.

In a statement praising the bill’s passage, the Navajo Nation said the bill would give Medicare a new power to negotiate the prices of certain prescription drugs, and it extends expiring health care subsidies for three years.

The AARP said the bill would also keep costs for Medicare-covered insulin from going over $35 a month. The Centers for Disease Control and Prevention found that in 2018-2019, the percentage of adults with diagnosed diabetes was highest among American Indian and Alaska Native persons.

Health and Human Services Secretary Xavier Becerra said the bill locks in premiums that help people save on healthcare costs, and people who rely on Medicare will not have to pay more than $2,000 in out-of-pocket costs for prescription drugs.

Speaker Seth Damon of the Navajo Nation Council praised the bill as “another major investment to uplift” tribal nations during the COVID-19 pandemic.

“This historic legislation aims to reduce the national deficit, combat growing climate change concerns affecting our Native communities, ensure tribes invest in green energy projects, and for the Navajo Nation to be a leader in clean energy development,” Damon said in the Nation’s statement.