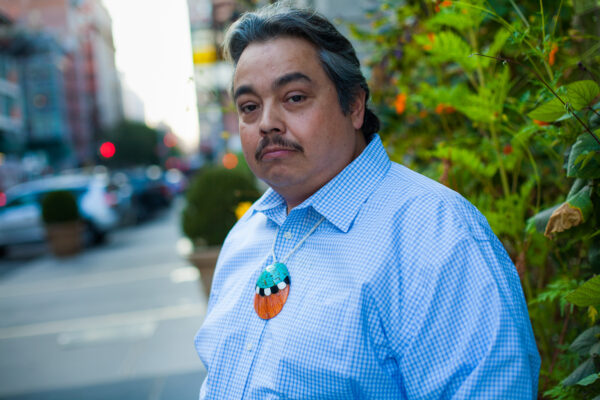 Kevin T. Tarrant, a musician and community activist who was a leader in the New York City’s Native American community, died May 4, 2020 due to complications from COVID-19. He was 51.

Born Jan. 14, 1969 in Belleville, New Jersey, Tarrant was Bear Clan of the HoChunk Nation of Wisconsin and Sky Clan of the Hopi Tribe of Arizona.

Throughout his career, he dedicated his life and professional energy to Native arts through various forms of music, theatre and activism. In a 2017 interview, he explained his passion for performing Native music. “A part of knowing this knowledge and being one of these song-carriers and dancers is you do these things for those that can’t,” he said. “And you do these things to make yourself feel good and make others feel good.”

Tarrant served as board chairman and executive director of the American Indian Community House (AICH) for several years. During his time at AICH, he was a speaker, teacher, presenter and coordinator of countless events, shows and honoring ceremonies.

Throughout his musical career, which started in 1990 after he co-founded The SilverCloud Singers, an intertribal Native American drum and dance troupe, Tarrant became an internationally known touring artist. Over the years, he performed at powwows and other Native events across the country, as well as high profile shows at The Apollo, Roseland and the Theater at Madison Square Garden. Another accomplishment for The SilverCloud Singers was its inclusion on Music for the Native Americans, a 1994 album by Robbie Robertson and the Red Road Ensemble.

In 2016, along with his wife Muriel Tarrant, he co-founded Safe Harbors, an Indigenous collective focusing on developing and producing Native Indigenous theater and performing arts in New York City. More recently, he was the musical director and performed in the Safe Harbors’ production of Don’t Feed the Indians – A Divine Pageant! at La MaMa. Last year, he was the composer and percussionist for the Broadway production and national tour of Ajijack on Turtle Island. According to a letter from his family: Tarrant is survived by his loving wife Muriel, daughter Henu Josephine (Travis), father Sam. He will be deeply missed by his brothers Donald (Tina) and William; his sisters Judy, Margaret, Kathleen and Patricia and by his uncles, aunts, nephews, nieces and friends. A memorial fund for his family was set up, donations can be made here.

Donate
Free Newsletter
About The Author
Author: Mikayla SteeleEmail: This email address is being protected from spambots. You need JavaScript enabled to view it.