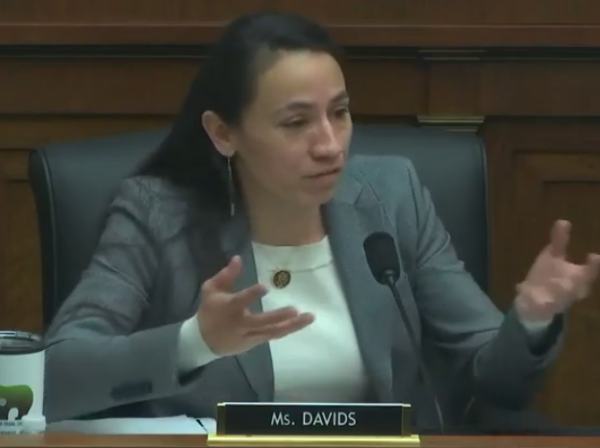 WASHINGTON — Representative Sharice Davids (D-KS), one of the first American Indian women elected to Congress, has helped secure key provisions to improve tribal infrastructure in new legislation proposed by the House Committee on Transportation and Infrastructure.

H.R. 2, the “Investing in a New Vision for the Environment and Surface Transportation in America Act’’ (INVEST in America Act) would boost total transportation spending to $1 billion per year and would predominantly support rural areas. The bill is sponsored by Rep. Peter A. Defazio (D-OR), chairman of the Transportation and Infrastructure committee.

“The INVEST in America Act will make critical, long over-due investments in tribal infrastructure - something I’ve been pushing for since I first began serving on the Transportation and Infrastructure Committee,” Davids said in a statement. “Amid the COVID-19 pandemic, which has disproportionately impacted tribal communities, we must invest in infrastructure in order to advance economic recovery and create much-needed jobs. I’m proud to support this legislation, and I look forward to working with my House colleagues to move a bipartisan bill forward.”

Last year Davids urged committee leadership to include tribal communities while developing their legislative agenda for the 116th Congress. She advocated for reforming the Tribal Transportation Program and making existing infrastructure grants more accessible to tribes.

"The INVEST in America Act puts forward a vision for our nation that moves our infrastructure into a new era, in part, by recognizing the long overdue need to invest in tribal communities,” Chairman Defazio said. “From the start of this Congress, I've had the pleasure of working with Representative Davids to ensure that our Committee serves as a proving ground for the greater inclusion of tribal voices in Federal policy. As the first member from Kansas to serve on the Transportation and Infrastructure Committee in nearly a decade, Representative Davids played a critical role in securing key provisions that will build and repair roads on tribal lands, significantly increase funding for the Tribal Transportation Program, and boost tribal economies and create jobs - which is especially important amid COVID-19."

The INVEST in America Act would help tribes recover from COVID-19 and enact many measures Davids has advocated for to improve tribal infrastructure, including: