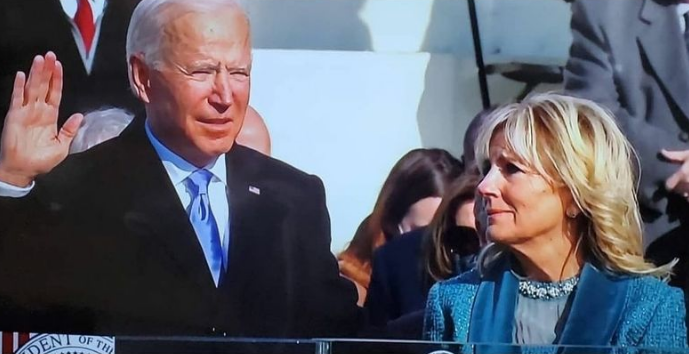 WASHINGTON — Joseph Robinette Biden Jr. became the 46th President of the United States shortly before noon today. Holding up his right hand, with his wife Jill Biden, holding a Bible, he was sworn in by U.S. Supreme Court Chief Justice John Roberts. Biden became the oldest man ever to be inaugurated president at the age of 78.

Biden was sworn-in on the west steps outside of the U.S. Capitol, under sunny skies in 42-degree F temperature, under unprecedented circumstances in modern history. Biden faces a daunting task to help heal a nation that is in the midst of a global pandemic that has claimed the lives of over 400,000 Americans since last March. He inherits a nation with an economy in its worst condition since the Great Depression. The new president inherits a country divided because of racial and partisan polarization.

“This is America’s day. This is democracy’s day… Democracy has prevailed,” Biden said as he began his inaugural address.

Prior to President Biden’s swearing-in, Vice President Kamala Harris was sworn-in by Supreme Court Justice Sonia Sotomayor. Harris became the first woman ever to hold the position of vice president of the United States. In addition to her gender, Harris becomes the first African American and Asian American to become vice president.

The theme of today’s inauguration is “America United.”

Biden has vowed to be a president for the whole nation. While he garnered over 81 million votes in the November presidential election, Biden realizes over 74 million Americans voted for former President Donald Trump.

Two days before the inauguration, on Monday, an NBC poll showed a stunning percentage of mainstream Republican voters—79 percent—believe Biden was not legitimately elected president. This after 60 lawsuits were rejected by state and federal judges since Election Day due to lack of credible evidence. In the same poll, 48 percent of Republicans believe Antifa was responsible for the riots at the U.S. Capitol on Jan. 6 and 87 percent gave Trump an 87 percent positive job approval.

Trump left Washington, D.C. about four hours prior to the swearing-in ceremony. Trump flew to his home in Florida, rather than attend the inauguration ceremony. However, former Vice President Mike Pence did attend the ceremony.

Former Presidents Bill Clinton, George W. Bush and Barack Obama attended the swearing-in ceremony with their wives. Former President Carter and his wife sent a message last week they would not attend due to their cutback in travel because of their ages. Both are in their 90s.

Because of the attempted coup and mob attack on the Capitol two weeks ago, security was at its highest level. Some 25,000 National Guard soldiers protected the grounds of the Capitol.

Biden’s assumption of the presidency has been compared to Abraham Lincoln’s, who was sworn in at the cusp of the Civil War that began one month and four days after.

Born in Scranton, Penn., Biden was brought up in a working-class family. He recalls that he had to move in with his grandparents when his father lost his job and had to move to Delaware to find employment.

During his tenure as vice president, Biden developed a close relationship with Obama, who surprised him with the Presidential Medal of Freedom, with distinction, on Jan. 12, 2017, just days before they left office.

Biden returned to the nation’s capital on Tuesday afternoon. By late afternoon, as the sun set along the National Mall, Biden and his wife stood with incoming Vice President Kamala Harris and her husband in front of the Lincoln Memorial Reflecting Pool to pay tribute to the 400,000 Americans who lost their lives to Covid-19. Lined along the Reflecting Pool were 400 lights each represented 1,000 lives lost.

"Between sundown and dusk, let us shine the lights in the darkness . . . remember all that we have lost," Biden said in brief remarks to begin his inauguration commemoration.

"To heal, we must remember. It's hard sometimes to remember, but that's how we heal,” Biden said. “It's important to do that as a nation.”