Even in death, Jim Thorpe (Sac and Fox, Potawatomi) has once again made history and proved himself “the greatest athlete in the world.” 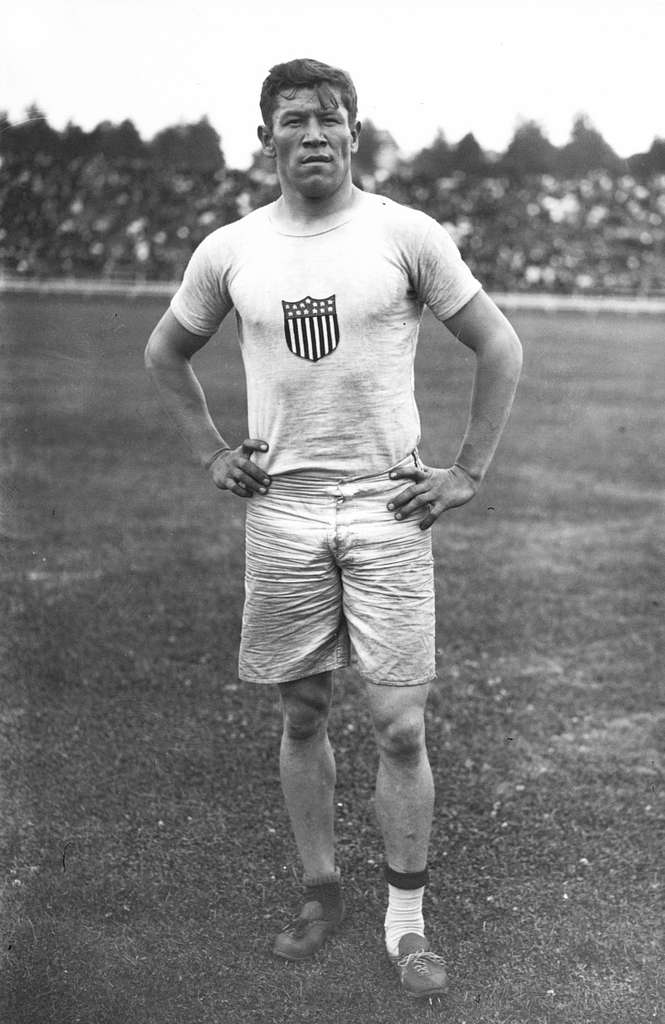 In a turn of events, the International Olympic Committee (IOC) will display the name of Jim Thorpe, whose original name Wa-Tho-Huk that means “Bright Path,” as the sole gold medallist in pentathlon and decathlon at the 1912 Olympic Games in Stockholm. This change comes on the 110th anniversary of Thorpe’s medal in decathlon.

The official announcement was made this morning. It comes 110 years to the day when Thorpe was awarded two Olympic gold medals by King Gustav of Sweden at the conclusion of the 1912 Olympic Games. Upon presenting Thorpe the medals, King Gustav told Thorpe, “You, sir, are the greatest athlete in the world.”

Today’s announcement of the IOC’s decision to restore the gold medals solely to Thorpe was made possible, in part, by the engagement of the nonprofit Bright Path Strong organization, supported by IOC Member Anita DeFrantz.

Jointly, they contacted the Swedish Olympic Committee (SOC) and the surviving family members of Hugo K. Wieslander, who was named as the gold medallist in decathlon when Thorpe was stripped of his medals in 1913. They confirmed that Wieslander himself had never accepted the Olympic gold medal allocated to him, and had always been of the opinion that Jim Thorpe was the sole legitimate Olympic gold medallist.

When contacted by the IOC, the Swedish Olympic Committee also declared that Thorpe should be acknowledged as the sole Olympic champion in the decathlon at the Stockholm games in  1912.

The issue of whether or not Thorpe was the sole owner of the gold medals came when the IOC stripped Thorpe of his Olympic gold medals because they discovered he had been compensated for playing minor league baseball prior to his participation in the 1912 Olympics. The amount of Thorpe’s compensation was roughly the cost of his room and board. Back then, the IOC’s rules barred athletes from participating in the Games if they had previously been compensated for playing any sport prior to the Olympics.

In response, the IOC erased Thorpe’s records from the Olympic record books. To those concerned with Thorpe’s legacy and historical accuracy, his medals and records were stolen from him. Many athletes have been found guilty of having been compensated for participating in sports prior to competing in the Olympics, some in the same era as his, but did not had to pay the penalty Thorpe did.

“The IOC’s decision in 1912 to strip Thorpe’s medals and strike out his records was not just intended to punish him for violating the elitist Victorian codes of amateurism. It was also intended to obscure him—and to a certain extent it succeeded,” Sally Jenkins wrote in Smithsonian Magazine in July 2012, on the 100th anniversary of Thorpe’s win.

Attempts to get the medals returned were not rewarded until 1982, almost 30 years after Thorpe's death, when replicas were delivered to his family. Even though the gold medals were awarded, the IOC did not restore Thorpe’s records in Olympic history.

The IOC did not go far enough to reinstate Thorpe’s records in the 1980s, but it has now, according to the president of Bright Path Strong.

“We welcome the fact that, thanks to the great engagement of Bright Path Strong, a solution could be found. This is a most exceptional and unique situation, which has been addressed by an extraordinary gesture of fair play from the concerned National Olympic Committees,” IOC President Thomas Bach said in a statement.

With this decision, Thorpe’s name will now be displayed as the sole gold medallist in pentathlon and decathlon.

In addition, World Athletics, as the responsible International Sports Federation for track and field, has agreed to amend its records to reflect this decision.

“We are so grateful this nearly 110-year-old injustice has finally been corrected, and there is no confusion about the most remarkable athlete in history,” Nedra Darling, Bright Path Strong co-founder and citizen of the Prairie Band Potawatomi Nation, said in a statement.

Thorpe was orphaned as a child and placed in the Carlisle Indian Industrial School, an Indian boarding school, which he attended from 1904 to 1913. He represented the United States at the Olympic games 12 years before American Indians gained U.S. citizenship. On the transatlantic trip to Stockholm, Thorpe and a Jewish teammate were forced to travel in the bottom of the ship, while the white American Olympic athletes received first-class accommodations.

Even after he arrived in Stockholm, Thorpe had to contend with obstacles. On the morning of the decathlon, his shoes were stolen shortly before his first event. Wearing shoes found in a trash can — one too big, the other too small — Thorpe won the gold in the decathlon with a 25-yard lead.

Anita Thorpe, granddaughter of Jim Thorpe, Vice Chairman/Sac and Fox Gaming Commission,  and BPS Honorary Board Member, said in a statement: “A moment 110 years in the making to finally hear the words officially spoken again, ‘Jim Thorpe is the sole winner of the 1912 decathlon and pentathlon.’ A glorious time of celebrations to all of his friends, family, and supporters. Hooray!!!”