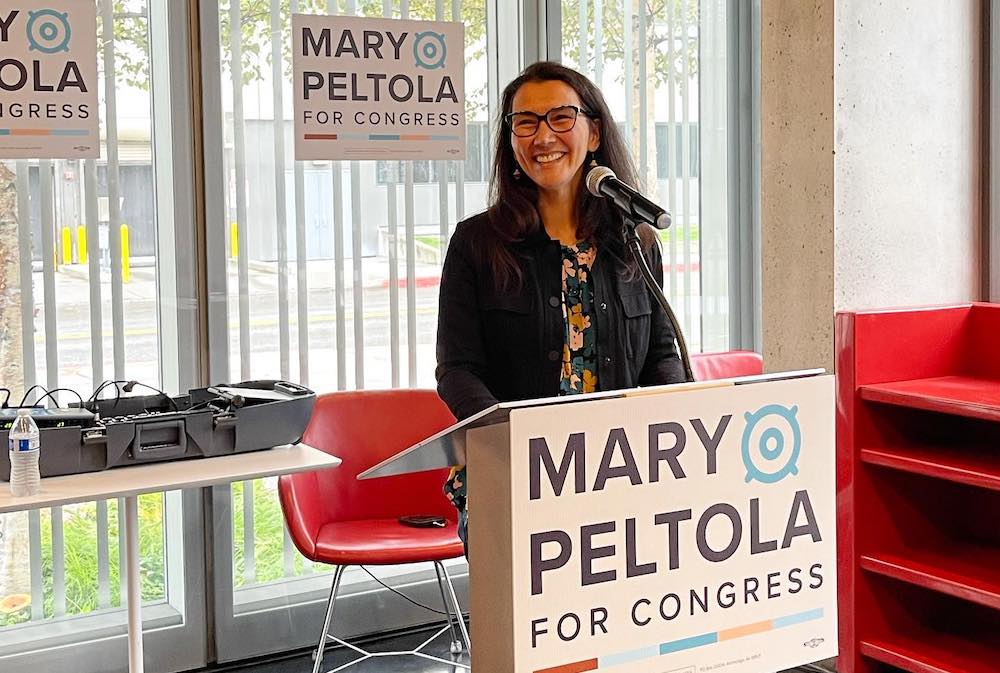 Mary Peltola made history on Wednesday when she became the first Alaska Native woman elected to Congress.

Peltola, a former state lawmaker who is Yup’ik, beat former governor and vice presidential candidate Sarah Palin in the special election to fill Alaska’s sole congressional seat, which has been open since Rep. Don Young died on March 19, 2022. Young served in the U.S. House of Representatives for 49 years.

In the special election, Peltola, a Democrat, garnered 51.5 percent of the vote to Palin’s 48.5 percent. Palin, a Republican, had the endorsement of former President Donald Trump, who campaigned for her in the state.

She is scheduled to be sworn in to Congress on September 13, 2022. Since this was a special election to fill the vacant congressional seat, Petola must run for reelection on November 8 against three other opponents, including Palin.

Native News Online interviewed Peltola via telephone on Thursday, Sept. 1, 2022. The interview has been edited and condensed for clarity.

Congratulations on your election to Congress. Indian Country is just thrilled.

Thank you. I really appreciate that. That means a lot, you know, as a Native person, (there’s) nothing more meaningful than support from other Natives.

Your victory was announced on your birthday. How special was that for you?

It was honestly very unbelievable. I talked to my dad late last night. My birthday fell at a very unfortunate time when I was growing up. It fell on the last day of commercial fishing. There was usually a lot of labor involved in terms of putting our boats away with the cold, rainy, and windy months. And so my dad actually called last night to say, “After 48 years, your August 31 birthday actually, finally worked out for you.”

Representative Don Young told an Alaska Native conference in 2011 that he would love to see a Native Alaska person succeed him in Congress. What does this victory mean to all Alaska Natives?

I do think that it is meaningful for Alaska Natives. We are not often included at the decision-making table, and we have to get pointy elbows and really assert ourselves to be heard. So, I think it is meaningful that Alaska has a representative that reflects (our) 12,000-year history with this place.

But I also have to make sure that I let you know that I am more than just my ethnicity. I'm more than just my gender. I bring a lot of experience to the table and I understand very deeply that I've been chosen to represent all Alaskans, regardless of their ethnic background or party affiliation or gender or gender identity. And I'm going to take that responsibility very seriously.

What are your top priorities for the remainder of the 117th Congress? You have about four months in office.

I'm trying to manage my own expectations—and other people's. I like to promise little, deliver a lot. I really think it's important that we recognize that to make substantive changes often takes as long as a decade or more when it comes to public policy. I think my primary objective is going to be getting the lay of the land, building and forging positive relationships with my colleagues, making sure I'm on the right committees, and coalition building for the things that Alaska needs.

I hear that you are “pro fish.” For those of us in the lower 48 states, what does that mean?

My relationship to salmon goes back to my mother and our language. The generic word for fish is also a generic word for food. Fish is a huge part of our diet. Being a Yup’ik person meant putting up hundreds and hundreds of fish for the winter that would take us through the winter. Dry salmon is a huge part of our diet. And it's something that we've been missing for the last 13 years.

Chinook salmon in the western coast of Alaska have been very depleted. This is a very deep concern for those of us who have been counting on their return. And the relationship that we have with salmon has been passed down to us generation after generation. It's really up to us to make sure that future generations also have access to that resource in abundance.

So for me, that's what being pro fish is about—really talking about precautionary management, considering the low ocean productivity, as well as adaptive management. Instead of just waiting for all the research projects to come back and tell us what is driving this downward spiral that we're in, I think we also need to be implementing precautionary management while we're waiting to find out what the drivers are of the decrease in salmon.

You're also a pro choice. Now that you’ve been elected, how do you plan to “fight to enshrine abortion protections in federal law” as you once tweeted?

Well, I think that it is important that we codify the rights that were inherent in Roe v Wade into federal statutes now that we have this very conservative and radical Supreme Court. I think it's so important that we get to a Congress—both in the Senate and the House—that's more reflective of the American will.

Since I'm talking to you, Levi, and your Native audience, I do want to also mention that part of my view on women's reproductive rights is influenced by the fact that many Alaskan Natives and Native Americans were sterilized without their knowledge or consent.

I believe it's just a fundamental right of every woman and every family to decide their own how and when they're going to grow their families.

Don Young represented Alaska in the House for 49 years. Do you plan on staying there for 49 years, Congresswoman-elect?

(Laughs.) Seniority is the name of the game in the Congress, and I will stay as long as (Alaskans) are happy. I think that your election cycle has an ability for Alaskans to decide on term limits every two years. So I will stay on in this capacity and build up my seniority for as long as I can be of service to Alaska.