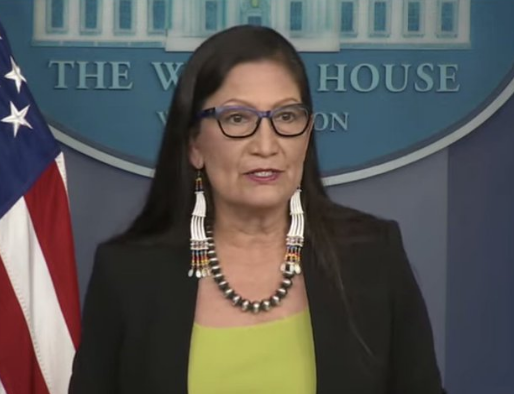 Haaland, the first Native American to be a presidential cabinet secretary, answered questions dealing with the expansion of Bears Ears National Monument to the environment.

In the afternoon, the Haaland, along with Domestic Policy Advisor Susan Rice, convened the first meeting of the first meeting of the White House Council on Native American Affairs. The Council will coordinate with tribal nations as it advances work on key issues such as climate change, tribal homelands and treaties; economic development, energy and infrastructure; health; education; public safety and justice; and international Indigenous issues.

Ten cabinet secretaries and other top government officials participated in discussions focused on strengthening the Nation-to-Nation relationship, improving tribal consultation, and formalizing the working committees of the Council.

The White House Council on Native American Affairs was established by Executive Order in 2013. The Council languished in the last Administration. President Biden reinstated the Council in less than 100 days in office.

The White House provided the following transcript of the questions asked of Haaland and her answers:

Q    Thank you, Secretary Haaland.  Can you give us an update on the moratorium on fracking on federal lands -- new contracts?

SECRETARY HAALAND:  Thank you so much.  So the pause on new leases is still in effect until we finish a review that is due to the President.  That means that the existing leases are still in effect.  We are still issuing permits on those lands.  And when we finish the review -- it's an important review -- we're talking to many people; we've had a for- -- a gas and oil forum;  we've talked to many folks across the country.

When that review is done, then us and the President will decide next steps.

Q    And can you give us a little bit more details on how that review works, what exactly you're doing, and when you think it'll be concluded?

SECRETARY HAALAND:  So, I can't say exactly when it will be concluded, but, as I mentioned, we've had a gas and oil forum, already.  That was virtual.  The Department folks are talking to governors, to legislators, to folks on the ground.  We're talking to --

It's mostly, like, getting everyone's input.  We want to make sure that every voice has a seat at the table, and it's really that, as well as using the science.  And that's how we'll do the review.  And it'll go to the President.

Q    We've heard from Republicans in Utah talk about their preference for legislation to expand the size of Bears Ears instead of executive action.  Do you think there's room for bipartisan work there, or are we probably looking at executive action from this administration?

SECRETARY HAALAND:  Well, I met with those legislators when I was in Utah -- the governor, the lieutenant governor, my former colleagues from the House.  Legislators legislate, and I think they should move ahead with legislation if that's what they want to do.

We will get the report done for the President and send it to the White House.  And it will really be the President's decision.  The Antiquities Act is a presidential -- you know it's -- it's all him; he can decide.

What I did when I went to Utah was make sure that, again, every voice was at the table.  We talked to ranchers and farmers; we talked to children who use those lands, and outdoor -- you know, economy folks.  And so, we're -- we want to make sure that we include every voice, and that's the report that will go to the President, and he'll decide.

Q    We've heard so many Tribes this year talk about, “We’re really struggling with mental health issues for teens…” -- I mean, a lot of teens around the country, but just teens struggling with depression during this pandemic.  Is that one -- an issue that you guys are going be addressing in this Domestic Council?

SECRETARY HAALAND:  I can’t -- this is our first meeting, so what we're really going to do, initially, is assign committees to each Cabinet Secretary, and it will be up to them to look at the topics.

Of course, we care deeply about this issue.  It's one that I know a lot of people are suffering from, so I appreciate you mentioning that.  And once we're able to get a -- you know, a clear path on where we're going with the Council, we'll certainly let everyone know.

Just piggybacking -- a couple questions just piggybacking off of your comments at the top about national parks.  Any reason why they're still at reduced capacity when we know that social distancing outside is a best possible case for COVID?

SECRETARY HAALAND:  Well, let's -- first of all, I'll say, we are taking every possible precaution to make sure that we are keeping people safe.  I don't ever want to jump the gun on this.  We know there's a lot of vaccinations that are happening.  Yes, our country is safer since President Biden has been in office; we're just not quite there yet.

They'll continually monitor that situation.  We want everyone to keep their masks on, to social distance, and -- and I appreciate the question.  We can look into it, and absolutely get back with you.

Q    And more business related: What's your plan for restarting the sale of oil and gas leases in the U.S. Gulf of Mexico?

SECRETARY HAALAND:  Once we are -- once we -- so, existing leases are already happening.  As I mentioned earlier, there's not a moratorium on -- even on new leases; they're just a pause.  So, when we -- when we have the review done -- what I'll say is, right now, permits are still being issued, so -- and there's still ongoing leases that are happening.