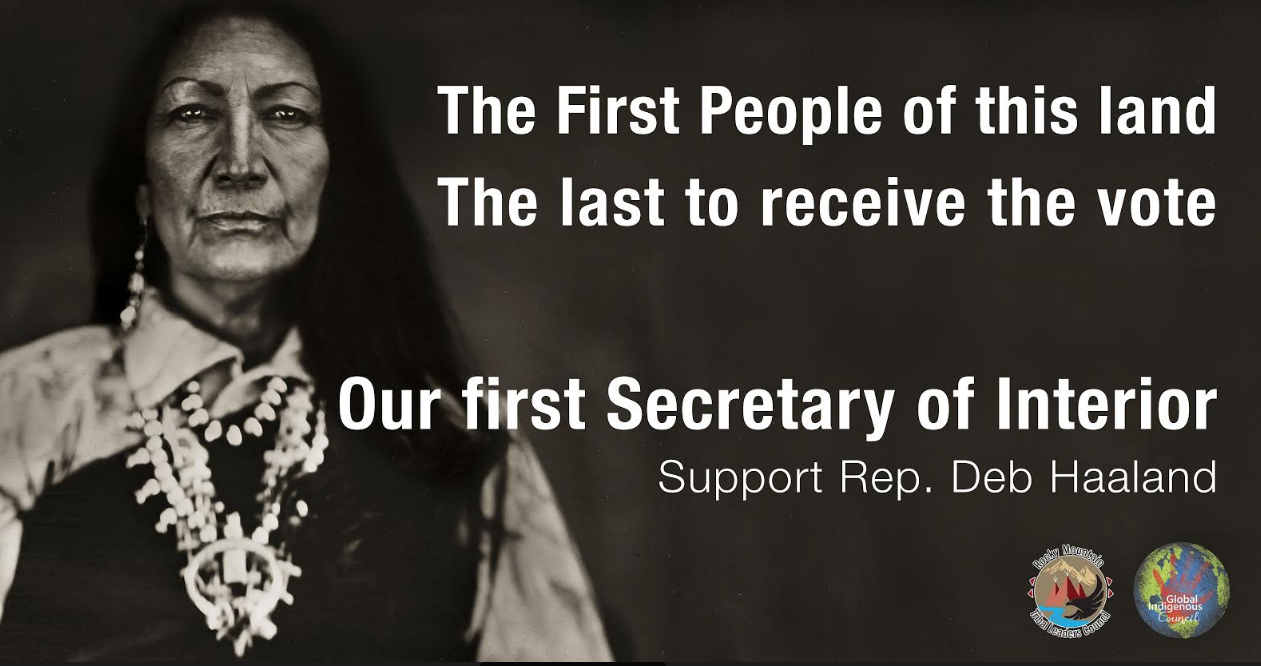 Under the headline “The First People of this land. The last to receive the vote” the billboards proclaim “Our first Secretary of Interior” with a striking image of Haaland shot by nationally renowned photographer, Joseph Kayne.

“With his condescending and cynical remarks, Senator Daines may succeed in ginning up the MAGA base, but he also evokes the ‘Great White Father’ in his paternalistic attitude toward not only Representative Haaland but his Indigenous constituents. His buzzword of choice to undermine her is ‘radical’ and so we’ve given it right back to him,” said Rain Bear Stands Last, executive director of the Global Indigenous Council, in reference to print and digital ads that will also begin running in Montana this week before appearing in other states.

“The only radical thing about one of the First People of the Land being nominated to care for it, is that it took over 244 years to happen,” reads the ad in which the GIC and RMTLC are joined by the Great Plains Tribal Chairmen’s Association (GPTCA). The allied organizations represent every tribe in Montana, Wyoming, South Dakota, North Dakota, Nebraska, and tribal nations in states as geographically disparate as Idaho, Louisiana, Arizona, and Alaska. The organizations are based in DC, Billings, MT, and Rapid City, S.D.

The alliance recently issued strongly worded letters in support of Haaland that were sent to Daines, Montana’s senior US Senator, Jon Tester, and Senator Mike Rounds of South Dakota, all members of the Senate Committee on Indian Affairs. Montana’s state legislative Indian Caucus also vociferously challenged Daines and the state’s freshman US Representative, Matt Rosendale, on their intent to derail Haaland’s confirmation. Rosendale, described the tribal leaders’ perspectives as “pathetic.”

“These attempts to conceal her outrageous radical views on public policy under a veil of identity politics are pathetic,” Rosendale wrote.

Tom Rodgers, President of GIC, said Rosendale’s comment “wasn’t worth dignifying with a response,” and pointed out that Rosendale is “irrelevant to the process” as he has no vote on Haaland’s confirmation. “At a time when courage and leadership in the public square is sorely lacking, we should all pray like Kipling that when fate lays on us our task, we do not shame the day,” continued Rodgers.

“That was really disappointing,” said RMTLC Chairman Gerald Gray of Rosendale, “because he didn’t even reach out to us before making his opposition to Congresswoman Haaland public. Tribal members in Montana are your constituents, aren’t you supposed to ascertain what we think so that you can represent us?” questioned Gray, who is also chairman of the Little Shell Tribe.

Daines, whose Los Angeles, California, roots belie his pioneering “fifth-generation Montanan” bio, is a multi-millionaire and among the wealthiest Members of Congress. The oil and gas sector is consistently among his most generous political contributors. Daines has cited Rep. Haaland’s opposition to the presently halted Keystone-XL Pipeline as one of the major factors in his quest to block her confirmation.

In their letter of support for Haaland, the GIC, RMTLC, GPTCA alliance drew attention to the role of fossil-fuel development on the Murdered and Missing Indigenous Women and Girls (MMIWG) crisis. Montana has the fifth highest rate of MMIWG cases in the country. The Indigenous community makes up 6.5% of the state’s population but accounts for approximately 30% of its reported missing persons.

“Unlike many in high political office, Rep. Haaland has never tried to disassociate extractive industry from the clear evidentiary pattern that identifies it with MMIWG cases. With the Bakken as just one example, extractive industry man camps at oil and shale fields, and along pipeline and construction routes, provide what has been accurately called ‘the nitroglycerin’ to the MMIWG crisis. There is good reason for tribal nations and their tribal members opposing projects such as the Keystone-XL Pipeline; not only would that have created immense vulnerability to reservation communities along its proposed route, it, like similar initiatives from a bygone age, threatened environmental catastrophe,” the alliance leaders’ wrote.

The letter identified the contamination of the Ogallala Aquifer, which provides for 20% of the irrigated farmland in the US, as an example of a potential “environmental catastrophe.”

“Without that aquifer, the US loses its ‘breadbasket.’ TransCanada’s proposed 274-miles of Keystone-XL Pipeline in Nebraska was, in places, to be laid where the aquifer is 10-feet or less underground. Scientists concluded that if the Ogallala Aquifer was contaminated by Tar Sands crude it would be ‘virtually impossible to restore’ to a pristine state.”

A 35th generation New Mexican of Laguna and Jemez Pueblo heritage, Haaland’s state is among the 8 that would be worst hit by Tar Sands bitumen polluting the Ogallala Aquifer.

Daines and Rosendale have both used Rep. Haaland’s support of the Green New Deal as evidence of her “radical views.”

“It shouldn’t be necessary to clarify civics for members of a congressional delegation but given that they are both part of the January 6th Sedition Caucus, maybe it is,” said Rain. “In the unlikely event that the Green New Deal ever makes it to the Senate floor, as Secretary of Interior, Deb Haaland wouldn’t have any vote in Congress to get it there. The Biden-Harris administration has consistently stated that it is committed to a just transition from fossil-fuel dependence, which means those workers won’t be abandoned, and we will have a habitable planet beyond the next decade,” he continued.

“I am also concerned by the responses I received about the role of the Department and lack of appreciation for issues that impact Montana such as wildlife management and hunting and sportsman access,” Daines posted on his social media accounts, to rationalize his objection to a Native American woman heading the Interior Department.

“Public lands are ancestral Indigenous territories, yet the original stakeholders have been omitted from any decision-making process and hence many sacred lands and mountain ranges have become pasture for livestock while the main species prospering on the great plains are nodding donkeys,” wrote the GIC, RMTLC, GPTCA alliance in response.

“As we stated in our letter to the senators, Deb Haaland has consistently demonstrated intellectual honesty when it comes to her decision making and she has an exemplary record of public service. We believe she is the most-fitting nominee for Secretary of the Interior in our nation’s history and she won’t just act in the interests of Native Americans, she’ll act in the best interests of all Americans,” said Bill Snell, executive director of the RMTLC.

“After Zinke and Bernhardt, it probably is a radical idea to have a Secretary of Interior who will protect public lands and not plunder them. Preserve endangered species and not blow them away to hang as trophies on a wall. Who will uphold the federal-Indian trust responsibility and address the crippling disparities in federal services to Indian Country,” added Rain. “The only endangered species threatened by Secretary of Interior Haaland might be Daines’ and Rosendale’s extractive industry cronies,” the GIC executive director concluded.