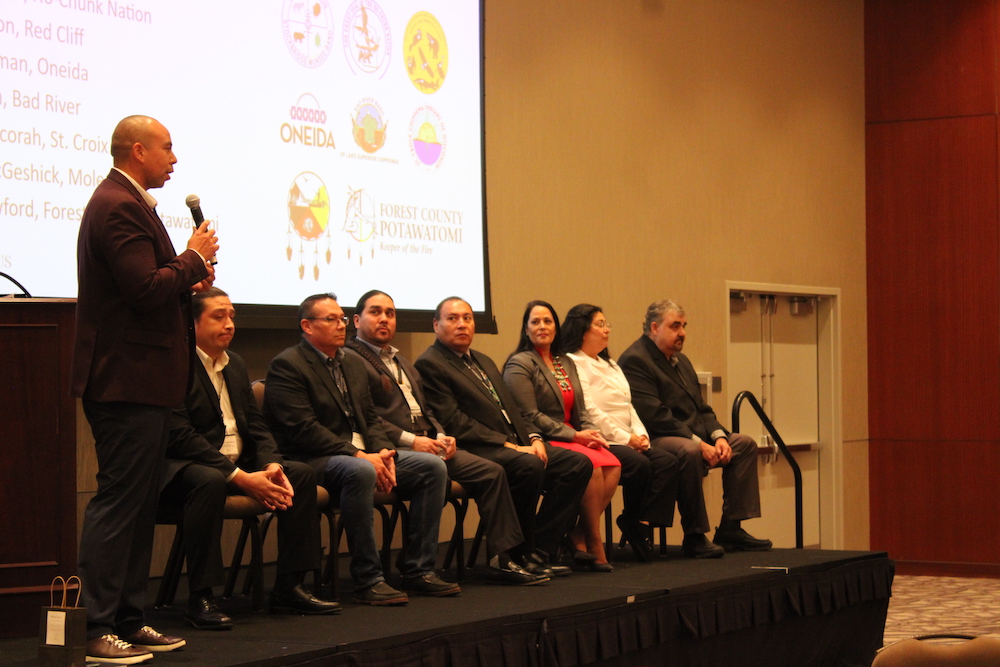 MILWAUKEE—On Tuesday, the Indigenous Business Group (IBG) launched its inaugural conference to highlight Native businesses in the region at the Potawatomi Casino & Hotel in Milwaukee.

The three-day conference, coined as Indigenous Biz Con, brings together nearly 300 business owners, administrators, and Tribal leaders from the state of Wisconsin to identify ways to collaborate and grow Indigenous businesses beyond Indian gaming.

“Our goals for this conference are to build a network of professionals to break down barriers and build a community that supports Indigenous businesses,” IBG Cofounder Zoar Fulwilder said during Tuesday’s general session.

The conference started as an idea among young business professionals attending a social mixer during the State of theTribes Address earlier this year in Madison. With success at the mixer, a conversation continued among Rob Pero (Bad River Ojibwe), Collin Price (Ho-Chunk Nation), and Zoar Fulwilder (Salt River Pima) to create a Tribal business professional group to host similar events in the future.

The trio founded IBG in July 2022 as a 501(c)(6) tax-exempt organization that works similarly to a chamber of commerce, with a focus on improving business conditions for Indigenous businesses in Wisconsin.

“Politics and bureaucracy aside, we’re going to shift the paradigm of elevating Native talent through IBG,” Pero told Native News Online. The inaugural Indigenous Biz Con event is designed to be a much-needed catalyst for Indigenous people, but is also inclusive to non-Indigenous supporters.

The funds raised from the conference will continue to help IBG promote Indigenous-owned businesses and for future events.

Wisconsin has another business entity that has been a champion for Wisconsin’s American Indian owned businesses—the American Indian Chamber of Commerce of Wisconsin (AICCW). One of its founders and longtime president, Craig Anderson, passed away in December 2020 and AICCW has been reorganizing since.

Anderson was recognized at the Indigenous Biz Con conference by several speakers who acknowledged his mentorship. A portion of the proceeds of the conference will be contributed to AICCW, according to the event’s organizers.

Sterlin Harjo, co-creator and showrunner of Hulu’s “Reservation Dogs” was scheduled as the conference’s keynote speaker, but canceled because he was diagnosed with Covid-19. He delivered a message to the conference attendees via a video.

Red Cliff Fish Company was recognized as “Outstanding Tribally-Owned Business of the Year” and Greywolf Partners, Inc. was recognized as “Outstanding Business of the Year” by the IBG. The gala also featured a fashion show highlighting Indigenous fashion designers Coral Benton and Josef Cornelius as well as Canadian Indigenous clothing company Ginew.

“Next year, our goal is to form our message on what Tribal Nations need,” Fulwider said during Tuesday’s gala.