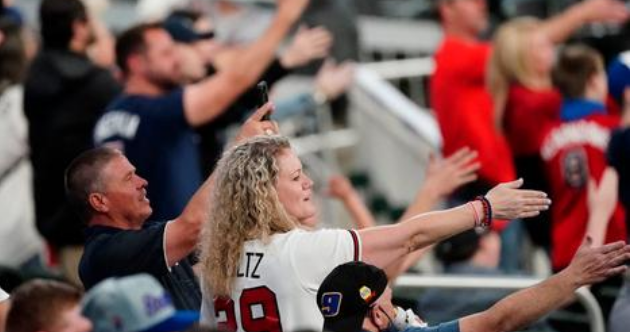 As the World Series between the Atlanta Braves and the Houston Astros, one Native American organization is voicing its concern about the offensive “Tomahawk Chop” gesture fans in Truist Park use during the Braves home games.

Ahead of the first World Series game tonight, I wanted to share a statement urging the Atlanta Braves to change their name from Crystal Echo Hawk, founder and executive director of IllumiNative - a Native-led nonprofit dedicated to increasing the visibility of Native peoples and challenging and changing the narrative about Native peoples.

“Tonight, millions of people around the world will be tuning in to watch the MLB World Series and will see the Atlanta Braves and their fans continue to use racist imagery, chants, and logos that depict Native Americans in a dehumanizing and objectifying manner. For decades, Native communities have urged professional sports teams to stop using us as mascots, to stop reducing us to caricatures, and yet the Atlanta Braves have continued to turn a blind eye to our calls for justice and equity.

All season, we watched Braves fans use the “Tomahawk Chop'' and chant racist remarks. This is unacceptable; these actions by the fans, encouraged by the team and its leadership, perpetuate the dehumanization of Native Americans and reinforce stereotyping and prejudice among non-Native people. The Braves organization has caused harm and created an unwelcoming environment for Native peoples.

Our history and customs are not yours to be used. Misrepresentations of Native Americans have real and harmful consequences to Native communities. It is beyond impermissible that these chants and logos still exist today.

We know that change is possible, we’ve seen it already in MLB with the Cleveland Guardians and in the NFL with the Washington Football Team. There is no excuse for lack of action. The Atlanta Braves have an obligation to their team, their fans, and the Native community to end their harmful actions.

It’s past time for Major League Baseball, and the rest of the sports world, to get rid of offensive Native imagery, logos, and names once and for all. We call on MLB and the Atlanta Braves leadership to put an end to these racist names and traditions immediately.”