ICYMI: "A Conversation with Billy Mills" at Western Michigan University

GRAND RAPIDS, Mich. — During course of any given year, we at Native News Online cover conduct many interviews and attend events in our coverage of Indian Country. As 2022 comes to an end, I have been reflecting back on enjoyable events I have covered for Native News Online during the past year. 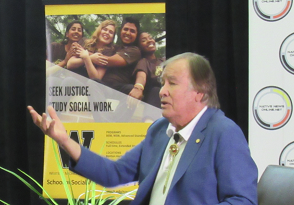 One such event I enjoyed was when I had to privilege to be a participant. It happened last month on Tuesday, November 15, 2022 when I interviewed legendary Olympic gold medalist Billy Mills (Oglala Sioux Tribe) at Western Michigan University for a program called "A Conversation with Billy Mills."

Mills, 84, told his story, including how he overcame growing up as an  orphan to become the only American to ever win the Olympic gold in the 10,000-meter race in the 1964 Summer Olympics in Tokyo. His gold medal-winning performance is considered one of the greatest upsets in Olympic history.

Even though he is in his 80s, Mills is iconic and still in demand to make speeches and attend events.  I aksed Mille was how he has remained relevant decades after he won the Olympic gold medal in 1964. Watch "A Conversation with Billy Mills" to hear his answer.