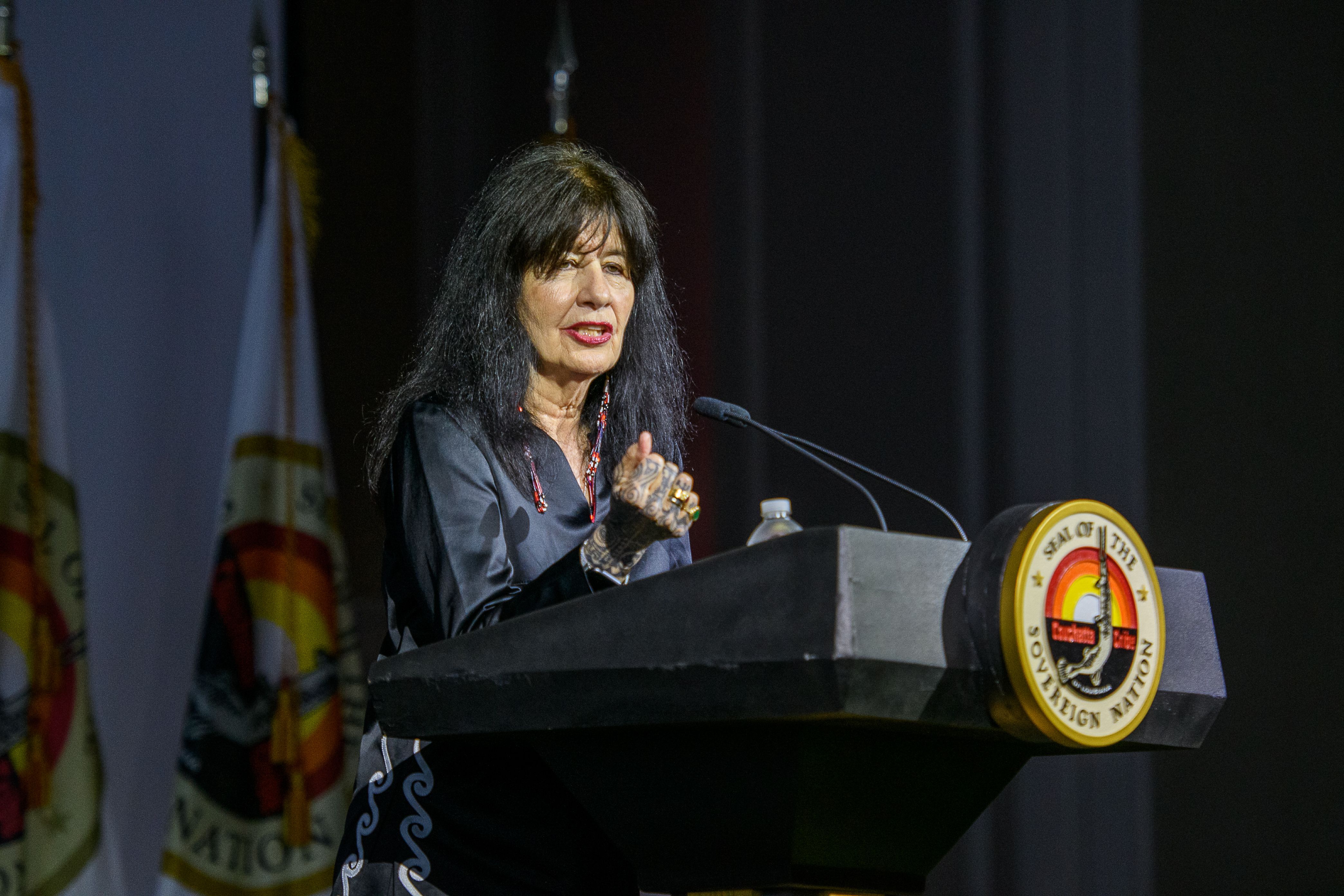 ELTON, La — “I was writing down the names of all the young women and I’m haunted by them. I read them, and I see them in my dreams,” said Joy Harjo (Muscogee Nation), the twenty-third Poet Laureate of the United States, after viewing the MMIWG documentaries Say Her Name and Somebody’s Daughter on the big screen.

The Poet Laureate joined the Coushatta Tribe for two pivotal events this past weekend. The first, to acknowledge the tribe’s historic achievement of securing the United States' most expansive Murdered and Missing Indigenous Women and Girls (MMIWG) Executive Order, which was signed May 5 by Governor John Bel Edwards. The second, to honor the tribe’s 2020 and 2021 graduates.

The events coincided with Coushatta Chairman David Sickey being appointed by Gov. Edwards to chair Louisiana’s MMIW task force which was mandated by the executive order.

Despite rain and flooding of near Biblical proportions that prompted Governor Edwards to declare a State of Emergency for some parts of Louisiana, Chairman Sickey resolved that the tribal celebrations would proceed for those who could safely attend, which in some instances required the tribe to transport guests.

Sickey was “committed” to providing Coushatta tribal members with the first opportunity in the US to watch Say Her Name in a theatre setting, and to see a pre-release director’s cut of the updated version of the critically acclaimed Somebody’s Daughter which now features a contribution from President Joe Biden.

“I appreciate hearing all the voices in the films. I have a granddaughter that someone tried to steal. She got away, but ten years later it still haunts me,” shared Joy Harjo at the conclusion of the program.

Both Say Her Name and Somebody’s Daughter are scheduled to be shown at events across the United States beginning in July.

Between the screenings, Rain, the director of both films, demonstrated why he is among the most compelling orators in the wider tribal community, a quality displayed during the recent Native News Online live forum for Say Her Name.

The film director highlighted an article in the executive order that provides for the task force to recommend how tribal members in Louisiana will be identified by law enforcement and administrative services. Until now, Indigenous people in Louisiana have been categorized as “other.”

“To categorize tribal people as ‘other’ is to dehumanize, to deny us our identity,” said Rain. “‘Othering’ has no body count, so unsparingly has it been used to justify the unconscionable with the ultimate intent to segregate by physical force or socio-economic disparity,” he charged.

“The rope that is our history is woven with the consequences of othering,” the film director continued, and then offered a deft yet searing summary of the Indigenous experience from “the yoke of Columbus” to MMIWG today.

“Thanks to Chairman Sickey’s efforts with this executive order, your children and grandchildren won’t have to experience that. The theft of their identity will cease. Their humanity won’t be up for question. They will be Indigenous. They will be Coushatta. They won’t be ‘other,’” concluded Rain.

After the films, a panel discussion was conducted by Raynella Fontenot, director of the Coushatta Tribe’s Department of Cultural, Historical and Natural Resources. Joy Harjo, Rain, Say Her Name presenter Juliet Hayes, and Chairman Sickey were the panelists.

“These are such important stories,” began Harjo. “And there’s so much that has to be done to shift the story.”

“How do you deal with grief?” Harjo asked. “I think that’s how I use poetry, because a poem like a song, and art, or a ribbon skirt, can hold grief – or at least help carry it – the spirit of it, to help heal. Those things can hold joy and inspire and help to show the way. That’s what our arts do,” she expressed.

“The bottom line is that it comes down to respect. Respect of ourselves, resect of our mothers, respect for the Earth – this place that gives us everything. We must respect the source of life. In the films, I liked hearing women referred to as  ‘life-bearers.’ That stayed with me, and I wrote that down, ‘life-bearers,’” Harjo continued.

Harjo praised Juliet Hayes for her work in Say Her Name and commended her for “being brave.” Hayes recounted her experiences filming in Bighorn County and on the Northern Cheyenne and Crow reservations.

“My heart breaks for these girls and the thing I kept thinking over and over again was that I’m not exempt from this. That could easily be me. I’m extremely blessed to be able to speak on this issue, because these are our women and girls – Indigenous lives that are not just going to be discarded and forgotten about,” said Hayes.

“It had to be very difficult for you, because you could feel and you could see the stories, you could see what happened. And the grief, the tremendous grief that was carried by the mothers there, that would be so difficult to step into,” Harjo responded to Hayes.

“These films tell stories that need to be told. It’s important that we grow from them, that we take the precautions and make the connections because the women are the life-bearers. We are the mothers and daughters and sisters, and we depend upon each other - and the men depend on us,” expounded Harjo.

“This is a humanitarian crisis that we have in our country. In what is supposed to be the most advanced democracy on the planet, it’s shameful that this is taking place among its First People. But here in our state, I’m very glad that our governor is leading. This executive order

is a historic moment that should be celebrated not just by the Coushatta but shared with all of the federally and state recognized tribes in our state,” said Chairman Sickey.

The following evening, at the Coushatta graduates honoring, Joy Harjo shared a story of a single mother who aspired to write poetry and recalled how the mature student took her creative writing class at the University of Mexico.

“The first time she came into my office she was carrying a motorcycle helmet. Not because she was a biker, but because it was the mode of transport that used the least fossil fuel. She is a really good writer. I remember an article she had published in New Mexico Magazine. But her life wasn’t easy,” emphasized Harjo, who explained that the woman had heritage from two different Pueblos and also from Norway.

“Her name is Deb Haaland. She’s now Secretary of the Interior,” Harjo revealed and added, “she has such a hard job.”

The first Indigenous person in history to be appointed Poet Laureate, Joy Harjo was later joined by Say Her Name director, Rain, for a spellbinding one-on-one session, that was as much a retrospective of Harjo’s brilliant literary career as it was an interview.

Those fortunate enough to witness it were taken on a journey from Harjo’s first published works, The Last Song and What Moon Drove Me to This, to her latest collection, An American Sunrise, and her forthcoming book, Poet Warrior. Harjo read from a galley copy of the work, her second memoir, which is scheduled to be published this fall.

Coushatta tribal members heard the Poet Laureate speak expansively about her creative process and cultural, historic, and contemporary influences from the spectrum of literature, music and art.

Fittingly, on an occasion of historic importance for the tribe, Joy Harjo concluded with a reading of “Remember” from She Had Some Horses.

Donate
Free Newsletter
About The Author
Author: Jessica PrahEmail: This email address is being protected from spambots. You need JavaScript enabled to view it.