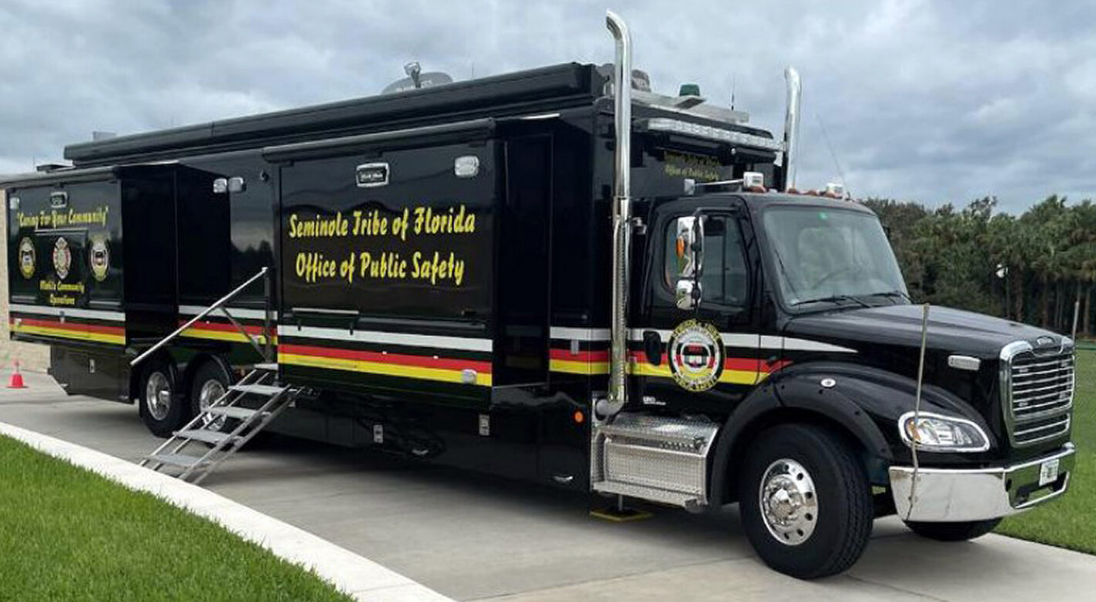 The consensus from tribal officials was the tribe dodged a big bullet.

[NOTE: This article was originally published by The Seminole Tribune. Used with permission. All rights reserved.]

After Ian roared through western Cuba as a Category 3 hurricane Sept. 27, it gathered additional strength in the warm, open waters of the Gulf of Mexico. At one point, many forecasts projected a landfall near Tampa Bay, which put it in the path of the nearly 100 tribal member homes in the area, the tribe’s Tampa casino and the tribe’s Lakeland Reservation. But Ian and its forecasts shifted south. It made landfall as a Category 4 hurricane Sept. 28 on Cayo Costa, a small barrier island that was once home to the Calusa Native Americans and their shell mounds.

Fort Myers and Fort Myers Beach – about 20 miles southeast of Cayo Costa – bore the brunt of Ian’s fury, which unleashed maximum sustained winds initially estimated at about 150 mph and a massive storm surge. The destruction was widespread. Two days after the storm departed, the death toll in the state from Ian was in the dozens.

The heart of Ian avoided direct contact with the reservations, going far enough south of Tampa and Lakeland and just enough north of the Brighton Reservation that no major damage or flooding occurred in those areas before it exited the state as a tropical storm near Melbourne.

Before the storm’s arrival and throughout its duration in the state, Will Latchford, the tribe’s executive director of Public Safety, kept the tribal community updated with twice daily online meetings.

The tribe’s emergency operations center, with representatives from several departments, operated 24/7 before, during and after the storm. Emergency hotlines were available for the tribal community and automated phone messages with updates about the storm were sent out. Sandbagging stations were set up on all reservations. The tribe’s 45-foot long mobile command vehicle arrived at the Florida Seminole Veterans building in Brighton to provide assistance if needed.

Although there was no direct hit, Ian made an impact in the tribal communities, including:
• Tribal government departments closed for four days. They reopened Oct. 3. The Tampa administration office reopened Oct. 4 following a power outage.
• The Ahfachkee School in Big Cypress and Pemayetv Emahakv Charter School in Brighton closed for four days. They reopened Oct. 3.
• The tribe’s casinos in Brighton, Immokalee and Tampa closed (Tampa’s casino remained open to its hotel guests). They have since reopened.
• Brighton’s Trading Post and Big Cypress’s fueling station closed and have since reopened.
• Power and phone outages occurred on the Brighton, Big Cypress and Immokalee reservations.
• Brighton experienced high winds and minor structural damage, including to the roofs of the Windmill Cafe and carports. Some trees were knocked over on the reservation.

The highest recorded wind gusts by county in a preliminary report from the National Weather Service included 140 mph in Lee (Cape Coral), 112 in Collier (Pelican Bay), 110 in Hendry (LaBelle), 78 in Polk County (Lakeland), 75 in Hillsborough (Tampa) and 75 in Okeechobee (Okeechobee).

Also, a tornado related to the storm occurred close to the Hollywood Reservation. According to the NWS, the tornado touched down Sept. 27 at 7:51 p.m. in the 4800 block of Jefferson Street in Hollywood and moved northwest across the Florida Turnpike near Stirling Road, uprooting trees near Broward College in Davie. It featured an estimated peak wind of 70 mph.

According to a news release from the White House, federal aid for Ian-related impacts has been made available to the tribe through a declaration by President Joe Biden.

Donate
Free Newsletter
About The Author
Author: Kevin JohnsonEmail: This email address is being protected from spambots. You need JavaScript enabled to view it.