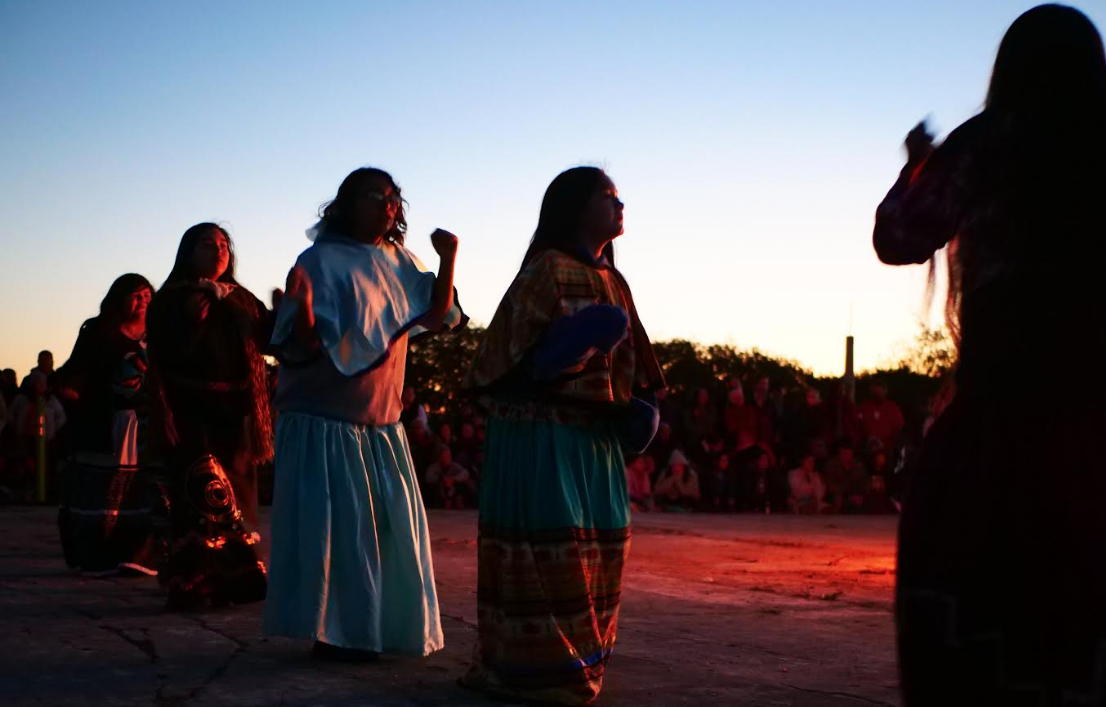 Hundreds of Native Americans and allies will board ferries at Pier 33 in San Francisco for a shore ride to Alcatraz Island in the pre-dawn hours of Thursday, November 25, 2021, to commemorate the 43rd Annual Indigenous Peoples Sunrise Gathering. The commemoration is an alternative to the traditonal Thanksgiving celebrations across the country on the fourth Thursday in November.

The Sunrise gathering will begin on the parade ground on the Island at 5:30 a.m. with an Ohlone welcome and the Round Valley Pomo dancers. The program will include speakers, drummers, dancers, and singers from across California, the continent, and the world.

The event will be hosted by the International Indian Treaty Council (IITC). The IITC believes it is important to affirm in history the accuracy of what really happened to Indigenous people.

“It’s important to remember the brutal history of genocide that Indigenous Peoples have suffered. It’s also important that we gather together to give thanks for our lives, the survival, and resiliency of our cultures, and the spirit of resistance passed down to us by our ancestors. Because of their courage and sacrifice, we still have these sacred ways that continue to give us strength to be who we are,” IITC Executive Director Andrea Carme (Yaqui Nation) said in a news release.

IITC also remembers that the first prisoners in what would become Alcatraz Federal prison were California Indians who resisted colonization by missionaries including Junipero Serra, as well as Hopis who refused to allow their children to be forcibly removed to boarding schools.

The event will also commemorate the 52nd anniversary of the Alcatraz occupation which was organized by a group of Indian students and young people calling themselves “Indians of All Tribes.” It began on November 20th, 1969, and lasted 19 months, sparking the national and international Indigenous Peoples movement for rights and justice which continues to this day.

Akwesasne Mohawk occupation leader Richard Oakes, who was one of the leaders of the 1969 occupation stated at the time that “Alcatraz is not an island. It’s an idea.”

IITC affirms that after 52 years, that idea continues to grow stronger.

IITC Board member Lenny Foster, Dine Nation, who participated in the original 1969 occupation as a young college student, emphasized the importance of these annual sunrise gatherings. “I extend my best wishes, love, and solidarity to all those who will gather on this day. It’s very important that we continue to carry out these sunrise gatherings on this sacred and historic place, to tell the truth about our histories, share our cultures and commemorate and give thanks to all those who have gone before us and who left us these ways, no matter what they had to sacrifice.”

Morning Star Gali, Pit River Nation, and IITC’s California community and tribal liaison affirms the special significance of this year’s gathering: “We are gathering together tomorrow morning in prayer, thanksgiving, and solidarity, sharing our resilient cultures and honoring the original occupiers who stood up and paved the way for us by asserting sovereignty and Self-determination for all Indigenous Peoples. Fifty-two years later, we continue their commitment to defend the rights of Indigenous Peoples in the spirit of unity, resistance, and healing.”

Boats will leave for the Sunrise Gathering from Pier 33 in San Francisco, starting at 4:15 AM. A limited number of tickets will be available for purchase at the dock beginning at 3:00 AM. For those unable to participate in person, the program will be aired live on KPFA, 94.1 FM, or online at kpfa.org. It will also be live-streamed on the IITC Facebook page. The event will be ADA accessible and shuttles will be available for those that need them on the island.

The event is open to the community and the public.