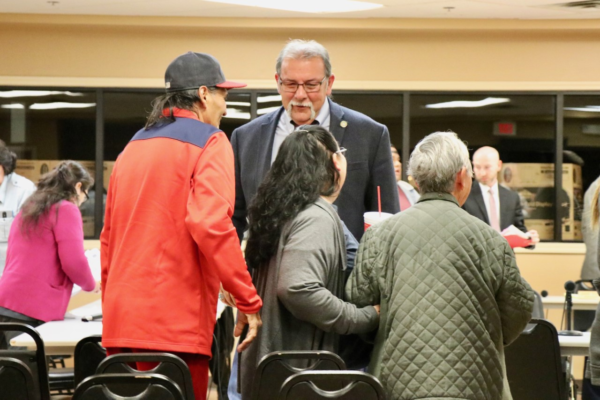 TAHLEQUAH, Okla. — The United Keetoowah Band of Cherokee Indians Tribal Council voted to approve to impeach Chief Joe Bunch on five counts, but not remove him from office, during a hearing held Tuesday, January 7.

Under the definition of the UKB Impeachment Code, “impeachment” means: “A proceeding against a public officer before a body, instituted by a written accusation called ‘articles of impeachment’.”

Remedies proposed by Council included removal from office, but ultimately only one was passed to issue Bunch an official censure letter before the meeting concluded in the early morning hours of Wednesday, January 8.

The tribe’s Attorney General Klint Cowan will draft the letter, which will be signed by Council, served to Bunch and given to the tribe’s secretary for official filing in the tribal records.

Bunch will continue to serve in his official capacity as chief of the UKB.

The impeachment hearing was called after Sequoyah District Representative Barry Dotson filed Articles of Impeachment charges against Bunch on November 21, 2019.

In order to find Bunch guilty of any impeachable charge, councilors had to vote two-thirds in favor. It was determined by a precedence set during a previous tribal impeachment that “two-thirds vote” would mean eight votes of the council.

Under Article 1, councilors found Bunch guilty on Counts 1, 3 and 6.

Count 1 stated that Bunch attempted to “conspire” to hire an individual of his choosing for the tribe’s grant writer position in May 2017 by seeking a nomination through Council rather than “going through Human Resources.”

Count 1 stated Bunch “acted outside the scope of his authority by declaring himself as the grant writer’s supervisor” and then “granted approval for the grant writer to have unlimited access to the Accounting Department and to the Accounting Software, Abila…” As such, Bunch “violated his oath of confidentiality” by granting such access and circumvented the authority of the tribe’s treasurer and executive director of tribal operations (EDTO).

Count 3 stated that Bunch was at fault for the tribe’s failure to complete a mandated Single Audit for 2017 because he “failed to properly ensure qualified persons were performing critical duties of a department into which he had inserted himself.”

It stated that though the Tribal Council approved a resolution to engage an audit firm to help complete the Single Audit in November 2017, Bunch did not send the letter of engagement to the audit firm “until June 2018,” constituting an “act of negligence.”

It also stated in February 2018 the accounting director resigned, but was rehired by Bunch without Council approval, violating a resolution “that requires all key personnel to be approved by the Council.” These actions state that Bunch “has failed to uphold his constitutional oath, ‘to improve the general welfare of the Band, and its members’.”

Count 6 stated that Bunch “did unlawfully instruct the council to vote ‘No’ when the motion was made to reappoint a corporate board member to the UKB Corporate Board” during a November 2, 2019 Tribal Council meeting by repeating statements that violated “Section 402 (a) (1), Improper Influence.” 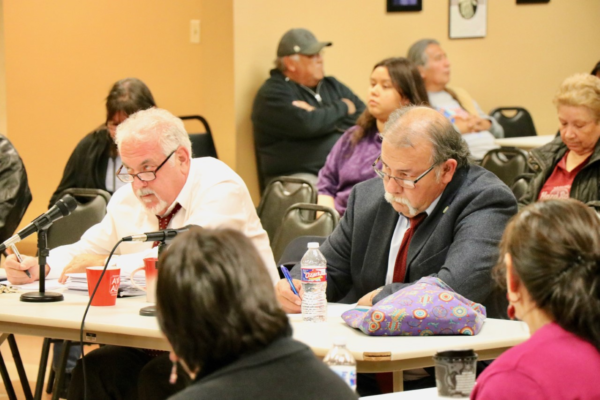 UKB Chief Joe Bunch, seated right, sits with his lawyer while the impeachment charges were read before the Tribal Council.

Under Article 2, councilors also found Bunch guilty of Counts 3 and 7.

Count 3 stated that Bunch conspired with a Corporate Board member in May and June 2018 to replace two officers from the board “without the benefit of a hearing.” However, the filing does acknowledge the “attempt of an overthrow of the two officers” was “defeated” when voted upon.

Count 7 stated that Bunch was applying selective application of the resolution 18-UKB-64 during a November 7, 2019 Council Meeting, after an individual was nominated to the Corporate Board who is also currently serving on the UKB Tax Commission.

Resolution 18-UKB-64 states: “A Corporate Board member can hold one position only.”

During the meeting, a councilor referenced 18-UKB-64 when asking, ‘Isn’t there a resolution that a Corporate Board member can only be on one committee?’ The councilor also stated that the individual was already on the UKB Tax Commission and thus should not be allowed to serve on the Corporate Board.

The count argues that though 18-UKB-64 seems vague, it “does not state committee, board or commission.”

Bunch has seven calendar days to appeal the counts of impeachment with the UKB Court, which would have the impeachment charges stricken from record if overturned.

Editor's Note: This article was first posted to the United Keetoowah Band of Cherokee Indians' website. Used with permission. All rights reserved.