WASHINGTON — On March 15, 2021, more than 200 years after George Washington assembled his first Cabinet, New Mexico Rep. Deb Haaland of the Laguna Pueblo was confirmed by the Senate to serve as the first Native American Cabinet secretary, heading the Interior Department.

The road to the vote was embattled, with a two-day Senate committee hearing and significant pushback from congressional members from resource-reliant states fretting over how their districts could be impacted by the Biden administration’s green energy policies. Some Republican senators made attempts to characterize Haaland as a “left-wing radical,” citing her support for the Green New Deal and opposition to fracking.

On a live Facebook viewing party Monday evening hosted by Indigenous group NDN Collective, Haaland addressed more than 450 viewers across the country. She said she rushed out of the house before her security detail heard of her confirmation to get more tomatoes for the dinner salad her sisters were preparing. 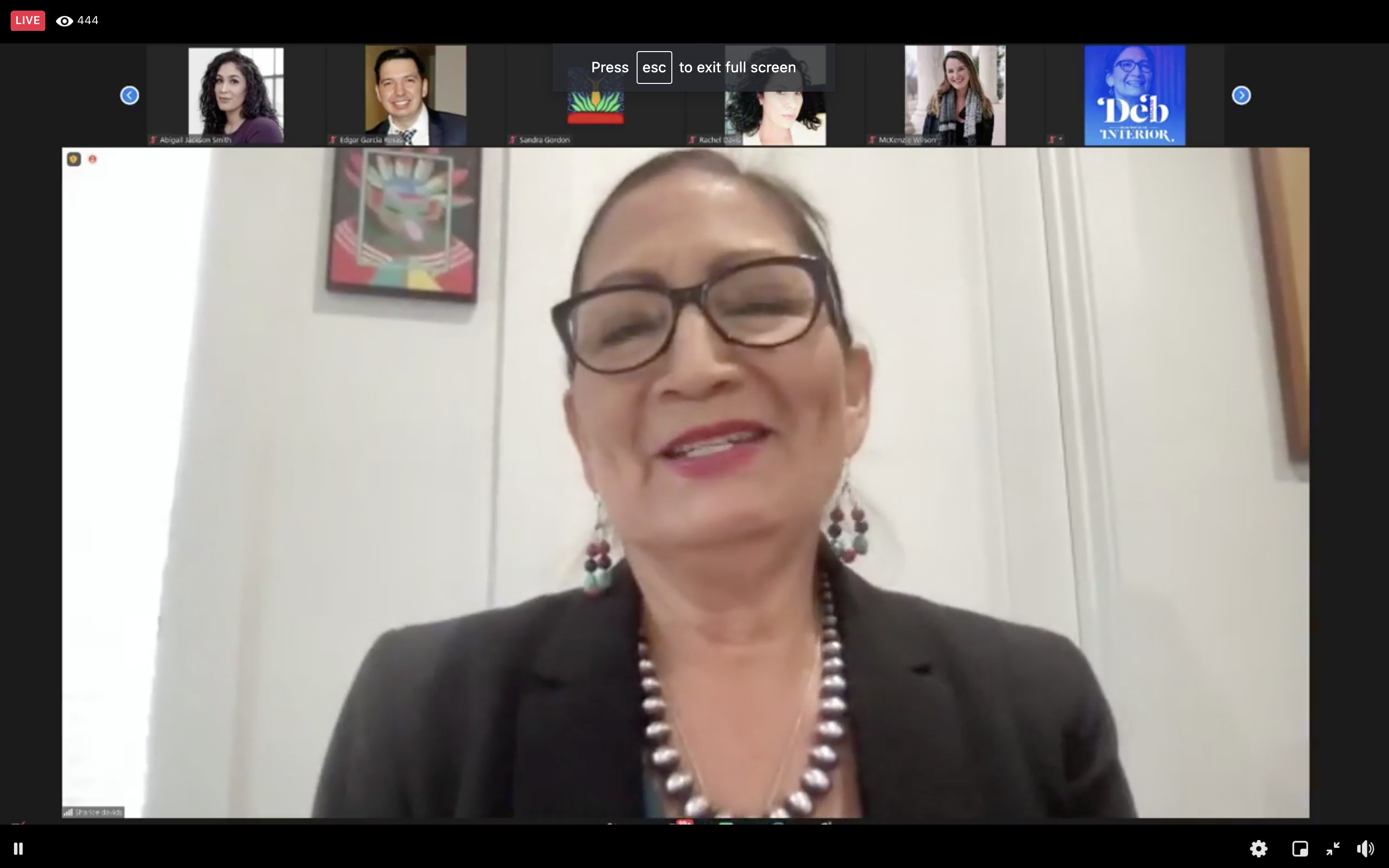 The 60-year-old lawmaker said she realized that was the moment everything is about to change — and not just for her, but for Native people everywhere.

“Though it should not have taken more than 200 years for a Native person to take the helm at Interior, or even be a Cabinet Secretary for that matter, President Biden, Vice President Kamala Harris and the entire administration are going to use this moment to build back better for every single one of us,” Haaland said.

The congresswoman was born into a military family in Winslow, Ariz. in 1960. Her mother, Mary Toya, is an American Indian woman and United States Navy veteran. Her father, J.D. Haaland, was a Norwegian American veteran of the United States Marine Corps and a recipient of the Silver Star for his courageous actions in Vietnam. He was buried with full military honors at Arlington National Cemetery in 2005.

As a single mother, Haaland received a law degree in American Indian law from the University of New Mexico in 1994 at the age of 34. While in law school, she sold salsa to support herself and daughter.

From January 2013 to November 2015, Haaland served as the tribal administrator for the San Felipe Pueblo.

Her entry into politics began when she was a get-out-the-vote volunteer worker.

“I got into politics because I really wanted more Native Americans to get out and vote,” Haaland told uPolitics in an interview.

“I started going into campaign offices of candidates I liked and asking for lists of Native Americans who I could make phone calls [to],” Haaland added. “That turned into me actually showing up in those communities, knocking on doors, registering voters. I’d go to the Navajo Nation fairs, Pueblo feast days, set up a booth, register voters, and drive them to the polls when it was time.”

She worked on the Obama reelection campaign in 2012 in a paid staff position.

She then ran for Lieutenant Governor of New Mexico in 2014 on a ticket headed by the state’s Attorney General. Haaland’s ticket lost the general election, giving another term to Republican Gov. Susana Martinez.

In 2015, she became the state chairperson of the New Mexico Democratic party.

“I became the state chair of our party in 2015 and we won across New Mexico. We had lost our statehouse in 2014 and we won it back in 2016 under my leadership,” said Haaland of her first formal position. “When I finished my term there, I thought, ‘maybe I could run for Congress.'”

She did and won.

Haaland beat out five contenders for the Democratic Party’s nomination for New Mexico’s 1st congressional district that covers a large portion of Albuquerque, including some pueblos north of the city.

In November 2018, Haaland and Rep. Sharice Davids became the first two American Indian women elected to Congress. On Monday, the two hugged from where they waited for the votes to come in, on camera at the NDN Collective viewing party.

Davids said when the news broke that President Biden had nominated Haaland to head the Interior Department, they cried together over FaceTime.

“For so long, the federal government's approach to tribal nations to Native people was through the lens of the Department of War,” Davids said Monday. “And now we have somebody who's going to be making decisions and listen to tribes, and working on these issues that have impacted every single one of us in ways that we can't even wrap our minds around sometimes. And she's going to do it with compassion, and with integrity, and with a deep understanding of why this is so important.” 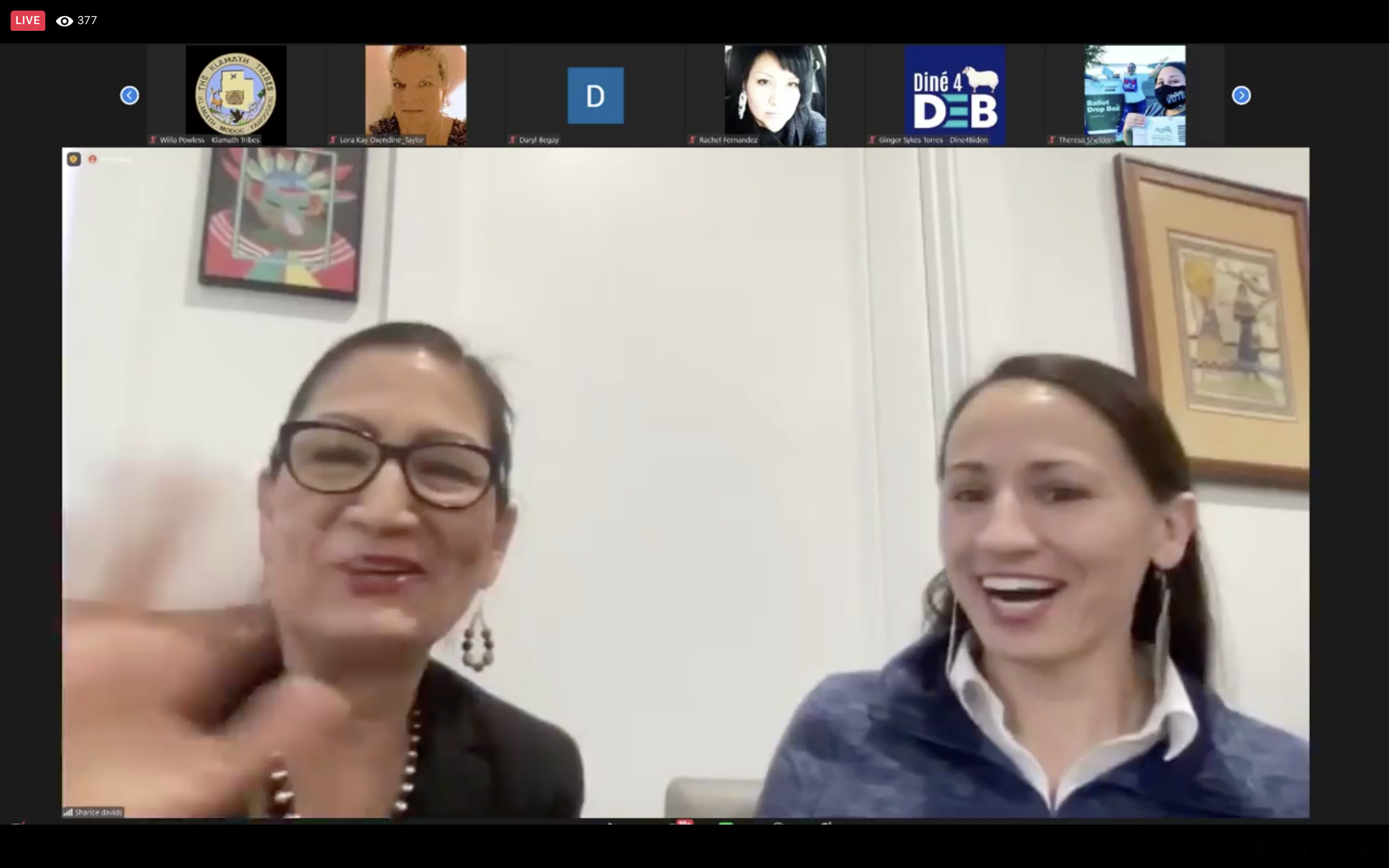 As a congresswoman, Haaland worked vigorously on behalf of her congressional district’s constituents. Beyond that, she worked on behalf of Indian Country through legislation to improve the lives of American Indians and Alaska Native people throughout the United States.

In 2019, Haaland made history when she became the first American Indian woman to preside over the House chamber, appropriately enough, during debate over voting rights and campaign reform.

“Presiding over the house, sitting in the speaker’s chair, it was especially significant because at the time we were working on the amendments to pass HR1 which was the big bill to protect voting rights and get big money out of politics,” Haaland said of the experience. She continued by describing how it “was pretty amazing” that she was “standing in that chair as the first Native woman.”

During her first term in Congress, Haaland had the best bipartisan voting record of all freshman members elected in 2018.

“This moment is a culmination of so many of the sacrifices that my ancestors made to leave behind a future for me,” Haaland said Monday. She told tribal members and Indigenous political figures across Indian Country she was grateful for them, and would continue to reply on their input. “I’ve never been a Secretary of Interior before so, heck, I hope you keep your phone lines open... because I might just call you some night at midnight when I need some help.”

On Tuesday, Haaland is expected to resign from her post as congresswoman and be sworn in as the 54th Secretary of the Interior tomorrow afternoon, according to congressional expert Holly Cook Macarro (Red Lake Band of Ojibwe). That would make Wednesday Haaland’s first day as secretary.

Macarro called Haaland “dehydrating, bringing tears to us over and over again,” in the live streamed viewing party. Tribal figures throughout Indian Country expressed gratitude to the Biden administration for Haaland’s nomination.

Mohican Nation President Shannon Holsey said Haaland’s appointment as secretary of the Interior has fulfilled the hopes and dreams of millions of Native Americans to have a meaningful seat at the table. “We also thank President Biden for his vision and unswerving commitment to diversity in his cabinet, and allowing future generations to witness what is possible when the ladder is left down,” she said.

Cherokee Nation Principal Chief Chuck Hoskin Jr. called Haaland a ‘trailblazer” in a statement after her confirmation. “Secretary Haaland has always been a champion of tribal sovereignty and I expect her contributions to tribal nations will leave an impact that will be felt by Native peoples for the next seven generations,” he said.