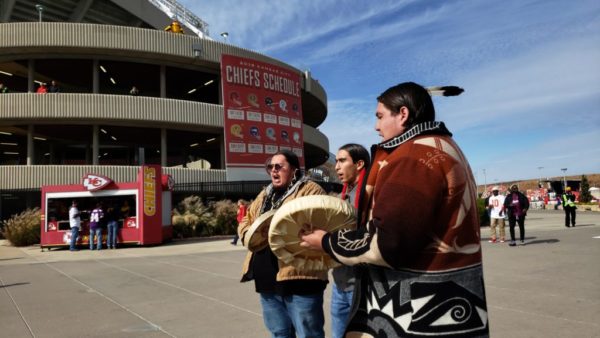 Editor's Note: This article was first published on December 13, 2019 by Haskell Indian Nations University's  The Indian Leader, the oldest Native American student newspaper. Since the Kansas City Chiefs play the San Francisco 49ers in the Super Bowl on Feburary 2, 2020, Native News Online wants to share the Haskell students' experience of protesting outside of Arrowhead Stadium. Used with permission. All rights reserved.

The men wore feathers in their hair and the women wore ribbon skirts; demonstrating and reclaiming what is rightfully theirs to wear; juxtaposed to the turkey feather headdress covered in glitter sported by a multitude of inebriated fans. The group was first met with taunts, obscene gestures , and harassment from several intoxicated people. But the small delegation was not deterred, they remained peaceful, singing songs and standing together.

The group left the game undefeated, despite all the negative interactions one positive one gave them hope. One African American man came up and respectfully asked “how does this offend you ?” [Referring to the tomahawk chop.] One of the group members, Junior Laravie, explained to him how misrepresentation of indigenous images are harmful to our people and children, and answered the man’s questions. The man respectfully listened and thanked the group for their words. With that positive educational exchange the members were inspired to organize an Initiative now called the Generational Protectors.

The Indian Leader was present at the first meeting of the Generational Protectors , and interviewed the group and some of its core members.

What is the goal or the message you want to get across ?

What was your purpose for going to Arrowhead?

“The reclamation of our identity as Indian people, and the fact that we are 40 miles away from this place… that’s so misinformed . This place that shows bigotry and to show them, hey, this is the real deal (gestures to self ). What I saw was a lot of arrogance. What I saw were people that are caught in this lie that American Indians have been dealing with for centuries. It’s the herd mentality.“

What are your thoughts after?

What was your motive for going to Arrowhead?

“to help support the idea that our people have been misrepresented throughout the years , and that we (as Indian people) are too comfortable. We let our guard down and have allowed things to happen. I’ve always been supportive of what helps our people now and down the road. As far as my experience down at Arrowhead there were a lot of people that just looked at us, didn’t know what was going on. There was a lot of empty minds, a lot of questions, they didn’t understand. I felt ok, I felt scared for the women who were with us, for their safety.”

What’s your take away from the experience?

“My takeaway… we’re just getting started”.

What was your motive for going to Arrowhead?

“This phrase I want to live.“ I always think about that within our ceremony songs that ask for life , but what does this mean? We want to live for what . we are living for the destiny of our spirit, we are living for our children and our Indian people’s place on this earth, for respect. The motive is to get our Indian People to think what it means to be Indian . What does it mean to think Indian ?…

The motive is for our children and for the life of our people. That’s what makes us beautiful in our diverse world.

My experience, when we pulled up [to Arrowhead] I thought of the young boys at Greasy Grass, when they rolled into battle, there was a point that they turned because they were afraid. There was one Cheyenne man that rode all the way down , he was killed, but he showed those boys this is how you live for your people. I was reminded of that when we arrived, something boiled in me and I became focused and aware. But when we started singing and everything [the fear] went away, like ceremony, just the power of the music .

What’s your takeaway from the experience?

“ . . . We have to become constructive. What I mean by that is coming together, seek counsel , build a foundation . We need to connect as a community, we need to build relations and bring understanding to the people. It’s the mission, it’s the voice, it’s the dream of why we are doing this; for the well-being of our people. That’s what I want to do with my life. The takeaway is that truth needs to be shared .”

We Are Still Here , but “they” have forgotten.

My personal motivations for going to Arrowhead. . . by standing up we are becoming leaders, HINU prides itself on building future leaders. Right now what we’re doing is leadership. The small group of people that went, they’re some of my closest friends, that’s my family; we share ideas and motivations for standing up for Indian Country as well as standing up against issues in our own backyard. I wanted to be a direct voice from the group that became Generational Protectors to our Haskell community and the Indigenous community of Lawrence, to hopefully quell any misunderstanding or miscommunication on the initiative’s behalf.

My experience that day… as an Indigenous women in a male-dominated place, filled with intoxicated people, I was on constant edge! You would be too. Myself and Lisha we were the only females. I was concerned for her safety as well as everyone else’s. But we were okay standing alongside each other in a good way, standing up for Indigenous identity but all the time very aware of our surroundings. The drunk men that kept coming up from behind, standing, to what I felt as too near. In one instance a women skipped up from behind the guys while they were singing and flicked Junior’s drum, then skipped off like it was cute, a full grown woman mind you. No respect for space. Yes there were people who tried to get up in our faces, but when they saw the cameras rolling [our phones were recording] they backed off. That one man, however, the one who actually stopped and talked to us, human-to-human, that gave me inspiration, so I created a short film about our experience. My takeaway would have been the realization that that experience is just the beginning. We need to come together and represent ourselves in numbers in order to educate ourselves so we can educate others.