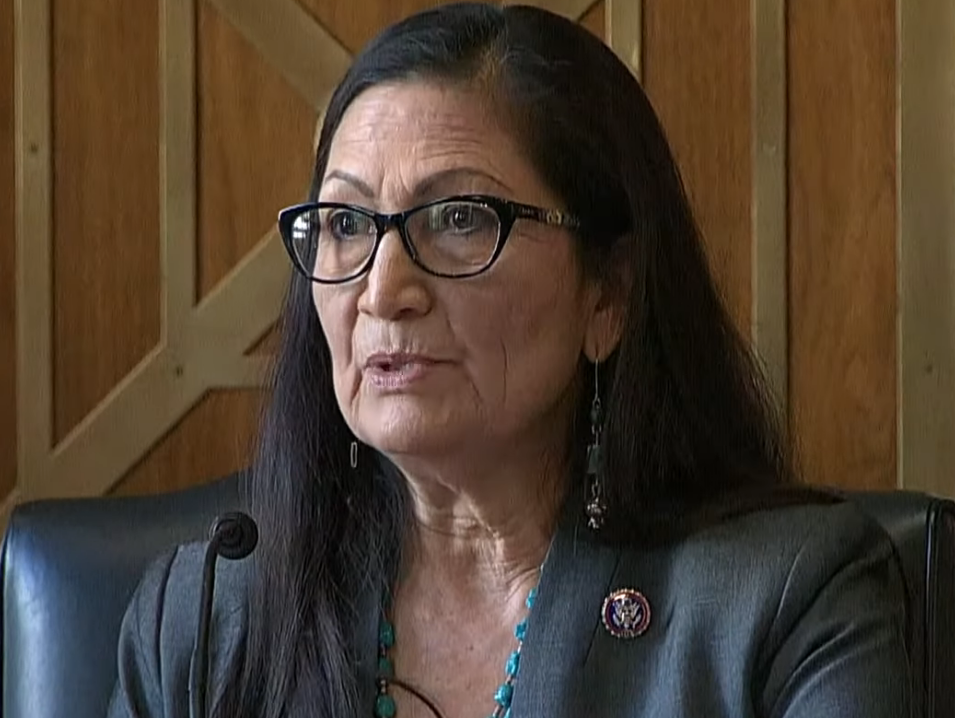 WASHINGTON — “I carry my life experiences with me everywhere I go. It’s those experiences that give me hope for the future. If an Indigenous woman from humble beginnings can be confirmed as Secretary of the Interior, our country holds promise for everyone,” Congresswoman Deb Haaland (D-NM) shared in her opening statement before the US Senate Committee on Energy and Natural Resources.

The committee, chaired by Senator Joe Manchin (D-WV), is considering Haaland’s nomination for Secretary of the Interior in a two-day hearing, February 23 and 24.

It was well that President Biden’s nominee mentioned that she was an Indigenous woman, as none of the Republican members on the Energy and Natural Resources Committee acknowledged the historic nature of Haaland’s nomination to oversee the federal agency that has responsibility for Indian Country. GOP senators Barrasso, Daines, Lankford, Murkowski and Hoeven are all past or present members of the Senate Committee on Indian Affairs.

Senator John Barrasso (R-WY), Ranking Member on the Energy and Natural Resources Committee and a former chairman of Indian Affairs, set the tone for Haaland’s confirmation hearing. After some predictable quick fire “yes or no” questions on the continued viability of fossil-fuel extraction which Haaland answered in the affirmative, Barrasso took issue with an October 2020 Tweet from Haaland in which she suggested, “Republicans don’t believe in science.”

“Do you think that as medical doctors we don't believe in science?” Barrasso asked with what translated to faux indignation. “How do you stand by this statement,” he continued, denouncing it as “sweeping” in a tone more akin to scolding an errant teenager than interacting with a nominee to the president’s cabinet.

“Senator, if you're a doctor, I would assume that you believe in science,” Haaland calmy replied.

Barrasso’s line of attack came the day after the US honored the 500,000 plus victims lost to COVID-19.

“As a medical doctor allegedly concerned with science, where was he and his doctor friends on the committee when Trump was suggesting injecting bleach to kill the virus, using drugs that were not FDA approved, and a whole panoply of unscientific nonsense promoted by the administration he faithfully followed, all of which had deadly consequences for the American people and particularly in Indigenous and minority communities?” asked the Executive Director of the Global Indigenous Council, Rain Bear Stands Last, of Barrasso’s new-found concern for science.

Senator Mike Lee (R-UT) continued Barrasso’s tenor, when he questioned Haaland about the Antiquities Act, and how “28 of national monuments over the last 40 years” had been established in Utah, to the detriment of state residents who he claimed had been “impoverished” by their creation.

Haaland began to explain that the area Lee was referring to, Bears Ears National Monument, was “the Pueblo Indians ancestral homeland,” but Lee curtly interjected that Haaland’s affinity for the area wasn’t his concern, it was with “people who have some sort of connection to the land,” whom he identified as oil and gas workers, ranchers, and associated leaseholders.

“Dismissing a Pueblo woman’s deep connection to her ancestral homeland demonstrated immense disrespect. The tone of this hearing was in stark contrast to what we witnessed with Ryan Zinke and David Bernhardt, the last two Interior Secretaries, about both of whom we had serious questions on ethics and conflicts of interests that were never answered,” commented A. Gay Kingman, Executive Director of the Great Plains Tribal Chairmen’s Association, and a former head of the National Congress of American Indians. “I hope this is not systemic in US Senate hearings now, that white men are treated with a measure of respect not accorded to women, and most especially to women of color?” questioned Kingman.

Congresswoman Haaland is of Laguna and Jemez Pueblo heritage and describes herself as a “35th generation New Mexican.” Senator Lee’s record demonstrates he has consistently stood in the way of legislation supporting any aspect of Native American sovereignty that has required unanimous consent.

As expected, Haaland was repeatedly quizzed about extractive industry and what some GOP Members of Congress have called her “radical” and “extreme” views on renewable energy as part of her stated commitment to address climate change and transition from the present reliance on fossil fuels. Haaland repeatedly committed to support all forms of energy development in a “responsible manner” and that she would implement “President Biden’s agenda.”

Committee chair, Joe Manchin (D-WV), appeared to be in accord with Haaland after she stated, “We want to move forward with clean energy” but cautioned “that’s not going to happen overnight and so we will absolutely rely on fossil energy.”

Manchin’s vote will be crucial to Haaland’s confirmation. “I’m totally committed to innovation not elimination,” he responded.

“Senator Manchin is someone who does the right thing more times than not. His demeanor at the hearing was more than just polite and professional. It was encouraging,” Tom Rodgers, president of the Global Indigenous Council (GIC) said. “Our decision to put a pro-Deb Haaland billboard up near his office in Fairmont, West Virginia, is an indication of how seriously we take his vote and chairmanship,” said Rodgers, who confirmed an earlier CNN report that the GIC had placed pro-Haaland billboards in several states represented by senators key to Haaland’s confirmation.

In an attempt at political checkmate, both Senator James Lankford (R-OK) and Senator John Hoeven (R-ND), tried to compromise Haaland on tribal nations that rely upon extractive industry. Hoeven raised the importance of the Dakota Access Pipeline (DAPL) to the Three Affiliated Tribes/MHA Nation in North Dakota, and Haaland’s opposition to the pipeline while chair of the Democratic Party in New Mexico.

“Yes, I did go to stand with the water protectors,” Haaland responded. “The reason I did that is because I agreed with the tribe that they felt they weren’t consulted in the best way,” she said of the Standing Rock Sioux Tribe, and emphasized the importance of tribal consultation.

Hoeven, until recently the chair of the Senate Committee on Indian Affairs, failed to mention the Murdered and Missing Indigenous Women and Girls (MMIWG) crisis in relation to the Bakken fracking fields that border the MHA Nation. MMIWG cases in the area rose 178% with the advent of man camps in the Bakken.

Senator Bernie Sanders (I-VT) gave Haaland the opportunity to identify what her priorities as Interior Secretary would be, and she reaffirmed the creation of “clean energy jobs,” the Civilian Climate Corps, and when Sanders asked specifically about Indian Country, she stressed increased access to broadband internet and countering the MMIWG tragedy.

Haaland emphasized her commitment to MMIWG several times, and while thanking Senator Lisa Murkowski (R-AK) and Senator Mazie Hirono (D-HI) for their support on the issue, made it clear that the two MMIWG bills she contributed to and that are now law, Savanna’s Act and the Not Invisible Act, were a modest start. Haaland has previously supported the comprehensive “Reduce, Return and Recover Act” draft MMIW legislation that is awaiting a senate sponsor.

Sanders characterized the US government’s treatment of Native Americans as, “Nothing less than shameful,” which is an apt description of Senator Steve Daines (R-MT) attitude toward Haaland. While several GOP senators displayed passive aggression, Daines displayed little restraint when trying to ambush Haaland about the delisting of the grizzly bear from the Endangered Species Act (ESA) and her support for the Tribal Heritage and Grizzly Bear Protection Act.

“I was caring about the bears,” Haaland replied when Daines asked why she co-sponsored the bill.

The Tribal Heritage and Grizzly Bear Protection Act was influenced by the historic Piikani Nation Grizzly Treaty, that stands as the most-signed tribal treaty in history, with over 200 tribal nation signatories. Tribal leaders stated multiple times that they fought the delisting of the grizzly bear to not only protect the Great Bear, which is considered sacred, but also to protect treaty rights, sovereignty, religious and spiritual freedoms, and to see the federal-Indian trust responsibility upheld.

In 2014, the Rocky Mountain Tribal Leaders Council, which serves every tribe in Montana, was the first Indigenous organization to formally oppose grizzly delisting.

“I enthusiastically support Representative Haaland’s nomination and am clearly disappointed by Senator Daines’ decision to oppose her nomination. She will bring a unique experience to the Department of the Interior,” said Gerald Gray, Chairman of the Rocky Mountain Tribal Leaders Council and the Little Shell Tribe.

“Let’s be clear, any of those tribal plaintiffs have likely forgotten more than Daines will ever know about the grizzly,” said GIC executive director Rain, who authored the Grizzly Treaty. “The arguments he was trying to make in the hearing were dismantled in Crow Tribe et al v. Zinke, which is why the Trump administration lost and the bears aren’t being trophy hunted by Daines and his ilk,” he explained.

Arianna “Tashi” Amehae is a freelance writer and filmmaker. She is the elected leader of the Young Roma Caucus of the International Romani Union. Her grandfather, Don Shoulderblade, is the founder of GOAL Tribal Coalition.