Group of Men Trek Across America to Bring Awareness to MMIW 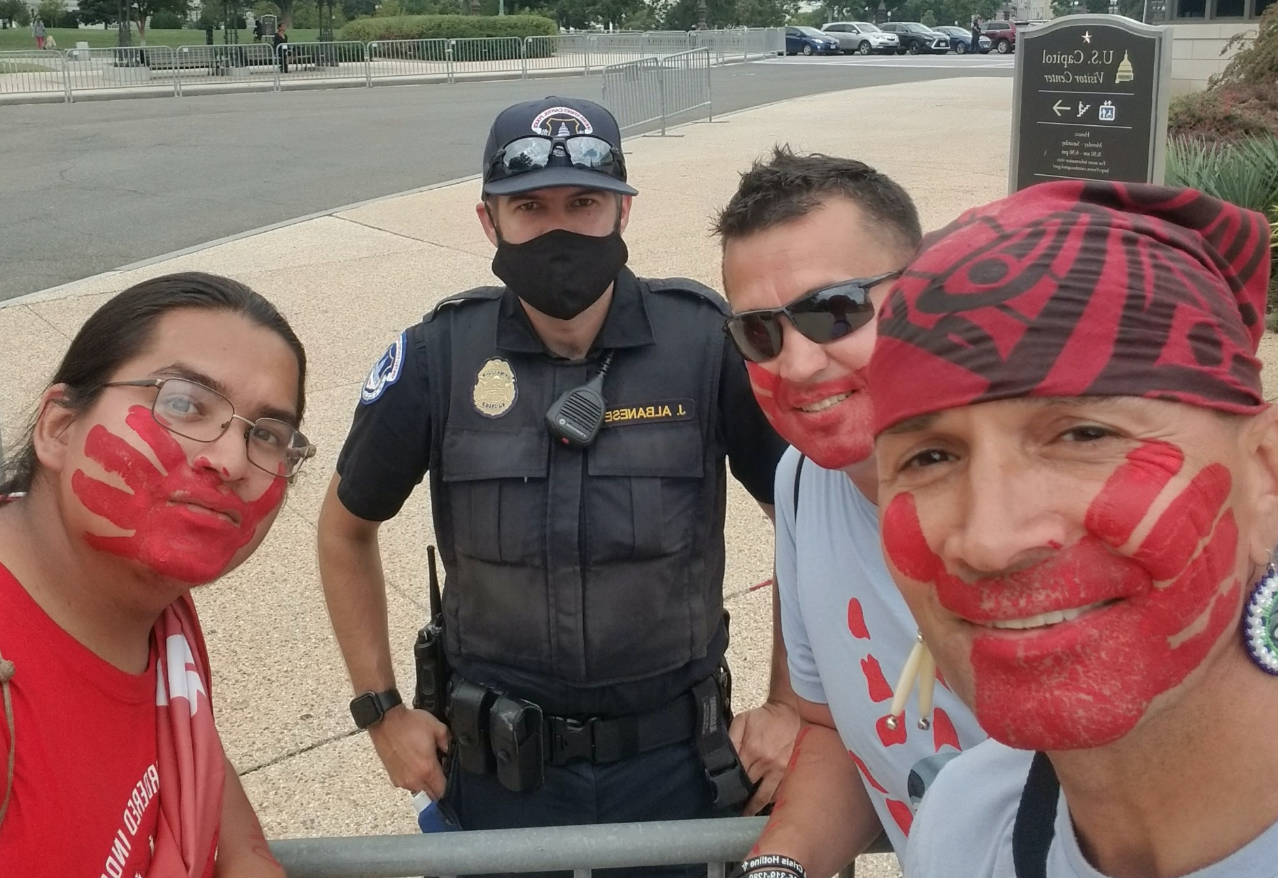 Running and biking daily with the name of a missing or murdered indigenous woman or child painted in red on their arms - and with the red hand print that has come to represent Missing and Murdered Indigenous Women movement painted on their faces - Colville Tribal member Willi Bessette joined tribal descendent Duane Garvais Lawrence and Lakota member Ethan LaDeaux on a cross-country run and bike ride that started at the Peace Arch in Blaine, Washington and ended on the Massachusetts coasts near Plymouth Rock.

The run, which was aimed at raising awareness for murdered and missing indigenous women and children, coincided with the 400th anniversary of the landing at Plymouth - and once there - after more than 3,100 miles traveled and several weeks of running and biking, the three danced and sang, said Garvais Lawrence: “We went there specifically because we wanted to sing the ‘Turn Around Song.’ We wanted to turn-around the trauma that our people have endured since that first landing at Plymouth Rock.”

This story was originally published by Tribal Tribune.

The team launched a Go Fund Me with the goal of $18,609 - a dollar for each of the missing and murdered indigenous women across Indian Country and in major cities across the United States according to the Go Fund Me page.

To date, the fundraiser - which can be found here - has raised $1,072. The money is to be donated to the MMIW Organization and Colville Tribal member Earth Feather Sovereign, a MMIW advocate in Washington state.

They painted the names of missing and murdered indigenous woman and children on the back of their RV. The names included:

The impetus for the trip stems back two years. When Garvais Lawrence - a veteran police officer who worked for 9 years on the Colville Reservation - was the assistant chief of police for the Cowlitz Tribe, then-Cowlitz chairman Bill Iyall brought the Savanna’s Act to Gervais Lawrence and asked him to do something about it.

“I read the act, and I have to tell you it made me sick to my stomach when I started reading the numbers of our women - our sacred life givers - who had been murdered and were missing throughout Washington state and the entirity of what they call the United States of America. It made me sick and it pissed me off,” said Garvais Lawrence.

In 2016 alone, the National Crime Information Center noted there were 5,712 known murdered and missing indigenous women.

“Me, as a Native American, I can’t just sit back and not do anything about it,” said Gervais Lawrence. “When I read those numbers and the fact that our sacred life givers are being abused and no one is doing anything, there are no celebrities, there are no actors, there are no musicians, there is no big movement of people saying, ‘Hey, we need to do something about this. This is unacceptable. These are the first people of the United States of America.’ We lived here first and we are being prayed upon. Our sacred life givers are being killed. Our young women are being raped.”

The run also found inspiration from Cowlitz member Rosalie Fish, who wore a red hand print painted on her face at the 2018 WIAA State Track and Field Finals in Cheney where she won the 1,600 meter, 800 meter and 3,200 meter titles.

The trip started in mid-August and ended Oct. 3 in Plymouth, covering over 3,100 miles and numerous reservations.

Throughout the run and after, the men continued to note the experience wasn’t about themselves but about the woman and families affected by violence across Indian Country - the names written on their RV and on their arms as they traveled.

“We had three eagle feathers to carry across the USA,” he said. “In the morning whomever was running would paint their face with the red paint handprint. Then the woman we were running and biking for would be placed upon the forearm in red paint. Each runner then would add additional items in red paint to honor family or symbols for protection.

“For example when I ran the names Nakotah LaRance, Eddie Lawrence and my father Kenny Garvais Lawrence etched in red paint on my left triceps,” said Gervais Lawrence. “On my right shoulder I carried ‘Unity’ in red paint and upon my left shoulder ‘Plsm 91.’ The runner then would have the eagle feather tied into his hair and off we would go. Sometimes the runner would go 1 mile, other times as high as 10 miles. It all depended on the each runner, the weather, terrain and good or bad days.”

In the afternoon, the trio bicycled, and as word of their travel traveled ahead of them, advocates and victims joined them to run and share their stories.

“The stories we came across of these people was unheard of,” said Bessette. “It makes you think about how sacred life is, people’s lives. I’m more grateful for what we have here on our reservation: our health care, our natural resources, our communities.”

Gervais Lawrence started the journey alone in Blaine. After several days of waiting for others to join him, and praying, he drove his RV 3.5 miles out and then ran back to the arch and then back to his RV on the first day.

“I wasn’t prepared for the emotional impact that it would have,” he said. “I was not prepared for that. I had the red hand print on my face. I’m running down 3.5 miles back to the arch and I got there and I started dancing. There were all kinds of people walking around, and I’m out there with the red hand print. I have my socks and shoes off. I’m in my bare feet and I am grass dancing the best way that I know how. I started crying. I could just feel the trauma and the fear of the woman who had been cut off. That’s what happened they’d been cutoff.”

In his first week, running along the Centennial Trail near Post Falls, Bessette passed a MMIW poster.

“I was tired and I looked and it gave me strength and purpose,” Bessette said in a Powwows.com Facebook interview with the journalist Corinne Rice. “It fueled me for every day, every foot step, every breath, physically, mentally and emotionally.”

He said seeing the poster focused his termination on the challenge ahead of him.

In another anecdote about the trip, Bessette tells a story of running up and down the rolling hills on the Omaha Reservation. He was struggling, he said.

“Duane said, ‘Remember every hill is 10 women. Push yourself. Push yourself,’” remembered Bessette. “So I was pushing myself, and this car came around a corner and that family had actually taken a different route than they usually take. It was a mother and daughter. They’d just lost a daughter and sister. I had a red hand print on my shirt that I had made and they came over this hill and the sister woke up. She thought she was dreaming, ‘She said what was that a red hand print?’ They turned around and they were grateful for what they were doing. They told us the story about their daughter and they were happy that someone was trying to do something and she wasn’t just forgotten." 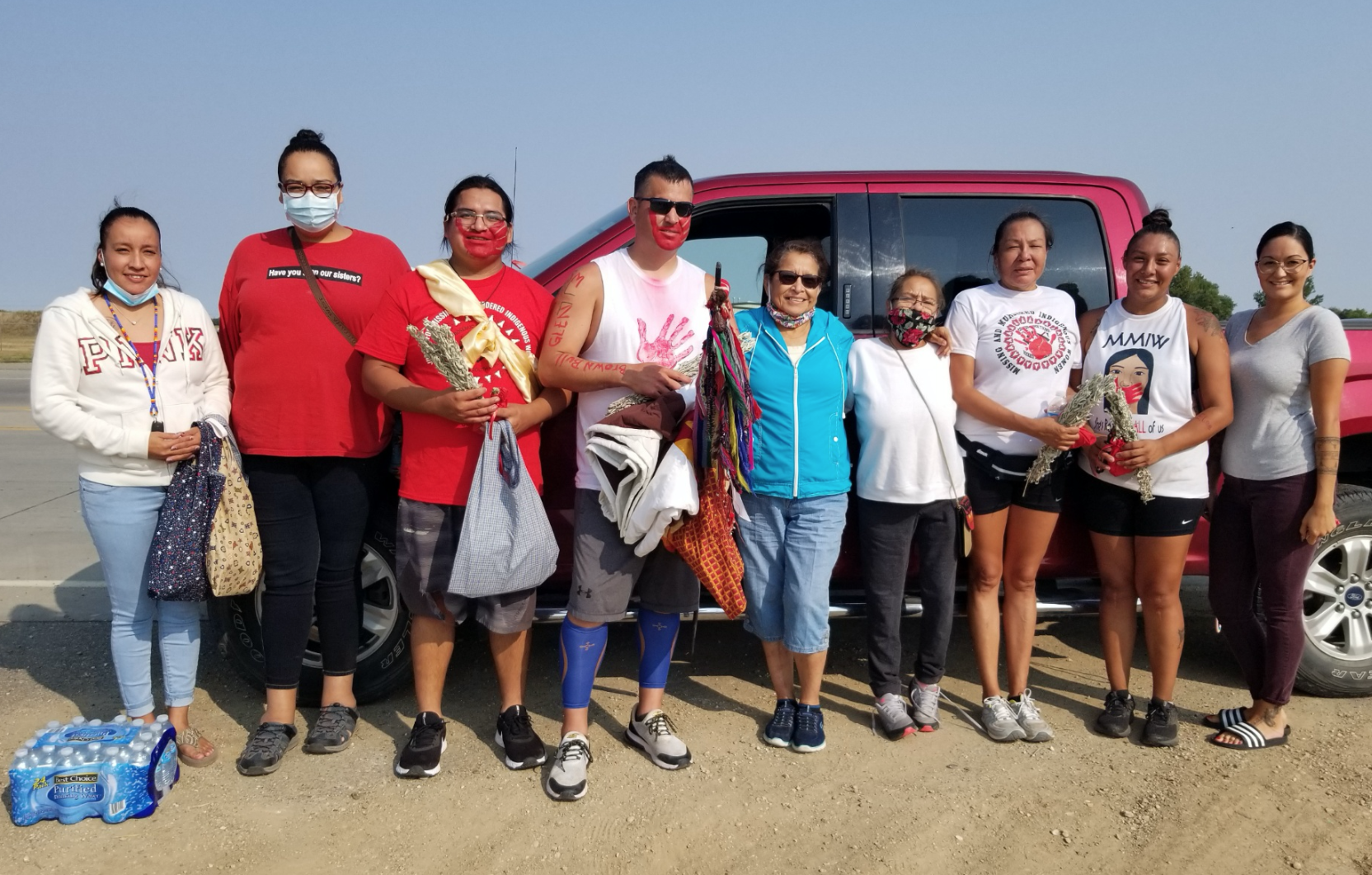 LaDeaux joined in Wanblee, South Dakota, his home on the Pine Ridge Reservation.

“I just heard about this run and bike across America and as soon as I heard about the cause, it instantly brought back memories of news stations bringing up family members, and the emotional trauma it brought to families on my reservation,” said LaDeaux. “To think about how there could be so many on just my reservation alone and how many there are in the world indigenous women who have been murdered or are missing is overwhelming.  Running and biking across America for this cause, it shined a brighter light than I could have imagined for my family and extended family back at home. To get up every day with the sun and pray, to start the day off running and biking, it was an amazing thing to be a part of. It is still an amazing thing to be part of. Just because we ran and it is over now, doesn’t mean it is over. The fight continues.”

In Washington D.C., the group sang and danced outside the Whitehouse, outside the halls of Congress and again outside the Supreme Court building. Days later, Oct. 10, President Donald Trump reauthorized Savanna’s Act and the Not Invisible Act into law.

Among other provisions, the Savanna’s Act creates new guidelines for responding to cases of missing and murdered Indigenous women and creates incentives for its implementation.

The Not Invisible Act creates an advisory committee for the U.S. Department of Interior and Justice Department on violent crime, set to consist of tribal leaders, law enforcement, federal partners, service providers and survivors.

Then on the final leg of the run, the group ran behind Ellen Pollard and was escorted by the Redrum Motorcycle Club as they entered Plymouth.

“We arrived in Plymouth Rock as four runners with faces painted red and ended up on higher ground where the host tribe, the Mashpee Wampanoag, welcomed us,” said Gervais Lawrence. “David Weeden and other community members of the Tribe spoke, prayed, sang and drummed. This was the 400 year anniversary of the landing at Plymouth Rock so we conducted the final ceremony at higher ground under the Chief Massasoit Sachem statue.”

“Our team spoke, sang the ‘Turn Around Song’ prayed and read the list of Missing and Murdered Indigenous Women out loud for Creator to hear and for the people to pray,” said Gervais Lawrence. “We talked about all the unfulfilled Treaties the United States Government made with all the Indian Tribes across the United States of America and how there has not been one single treaty completely fulfilled as promised and every single one has been broken.”

In total the group had ran and biked over 1,250 miles.