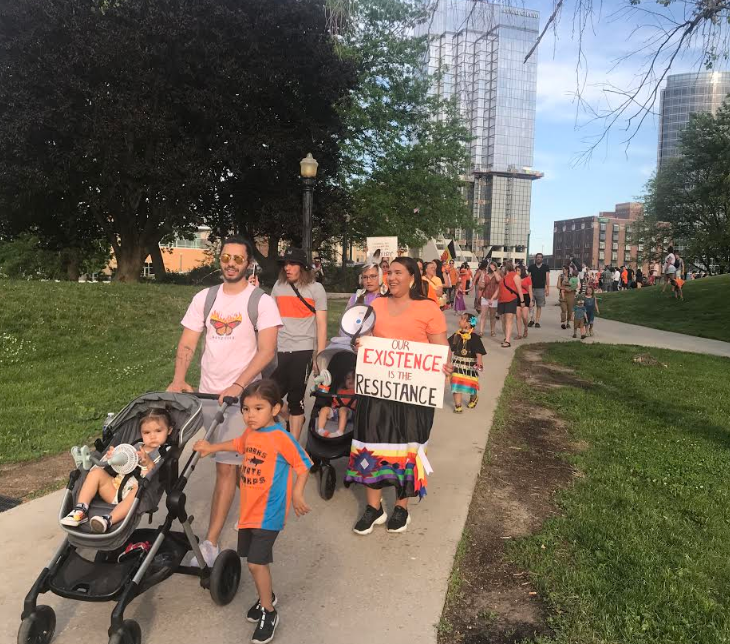 GRAND RAPIDS, Mich. — Under brilliant blue skies of a late spring evening on Thursday at  Ah-Nab-Awan Park n downtown Grand Rapids, Native American elder George Martin (Lac Courte Oreilles Band of Lake Superior Chippewa) offered a prayer and then asked for a two-minutes and 15-seconds moment of silence to honor the 215 children whose remains were discovered in Kamloops, British Colombia on the grounds of a closed residential school.

The crowd of about 200 gathered in remembrance of those children who died while under the control of the Catholic church that operated the Kamloops Indian Residential School. The residential school was operated by the Catholic Church until 1969.

The fact that 2,035 miles separate Grand Rapids from Kamloops did not matter to the over two hundred members of the local Native American community, because many of those in the crowd either attended an Indian boarding school or had relatives who did. What was important was another Indigenous community—a kindred community—was now suffering from the pain of past injustices.

Last evening Shannon Martin (Gun Lake Tribe), the former director of Ziibiwing Center of Anishinabe Culture and Lifeways in Mt. Pleasant, Mich., said there are 227 remains on the grounds of the closed Mt. Pleasant Industrial Boarding School that is now owned by the Saginaw Chippewa Tribe of Michigan.

“Through research, there are 227 undocumented deaths attributed to that school. The U.S. government, through administrative records, owned up to five,” Martin said.

She said our tribal leaders and communities should convince policy makers—law makers—to fund investigations into where more human remains of students who attended boarding schools may be found and get an accurate count of them.

“We cannot forget. We have to acknowledge and talk about it within our families, as painful as it is. We have to ask our relatives to talk about this because that is where our healing, our strength and our velocity will begin,” Martin said.

During the program, members of the crowd were allowed to say a few words, traditional Anishinabe drumming, singing and dancing took place, including jingle dress dancing.

After the rally at Ah-Nab-Awan Park, the crowd marched three blocks to St. Mary’s Catholic Church. They left shoes and stuffed animals on the steps of the church. While a local drum group sang four songs as a means of expressing their concern for the Kamloops First Nation community and healing for their own remembrance of pain brought to them and their families here in the United States.

Susan McSauby, a tribal citizen of the Grand Traverse Band of Ottawa and Chippewa, attended the event with her family.

“It is important for us come together so people become aware of the boarding school era. Last weekend I was talking to my sister-in-law who didn’t know anything about boarding schools. People have to be taught,” McSauby said.

For Keith Dayson, a tribal citizen of the Little Traverse Bay Bands of Odawa Indians, he attended in memory of his father who attended a boarding school.

“I came to support him and my family. It is part of our past,” Dayson remarked.

The event was organized by local community memeber Mariah Eldridge (Navajo and Pueblo).