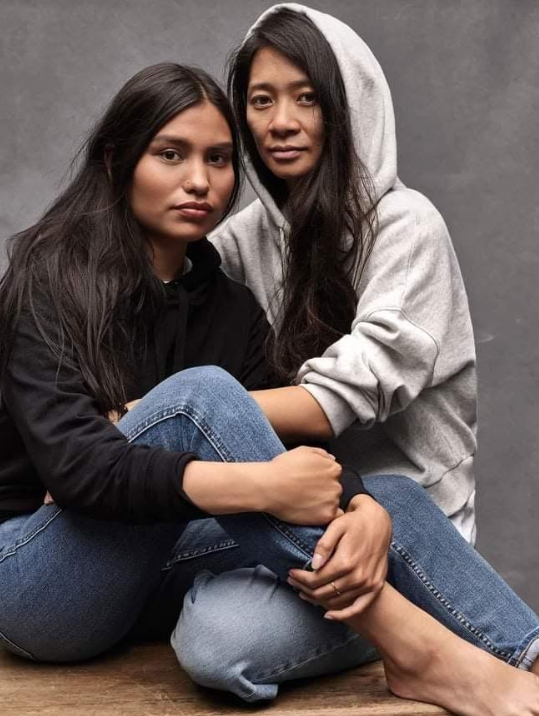 SAN FRANCISCO — The GAP, Inc. has launched a new ad campaign that skips fashion models in favor of “change-making individuals” including JaShaun St. John, a 20-year-old Lakota actress from the Crow Creek and Pine Ridge Indian Reservations in South Dakota.

“We brought actors, activists, artists, and an astronaut together, showed them our new fall line—then added a mic,” the GAP’s website notes. “What we got were renewed voices and unique perspectives from individuals, for all.”

St. John’s role in the campaign grew out of her work with Oscar-winning director Chloé Zhao, who recommended the young actress to the apparel maker.

“When GAP asked Chloé Zhao for recommendations of other individuals to participate in their campaign, she recommended me,” JaShaun St. John told Native News Online. “We’re two people from the film industry who come from different places, speak different languages and then the company reached out to me.”

St. John worked with Zhao on “Songs My Brother Taught Me”, a feature filmed on the Pine Ridge Indian Reservation. The film was Zhao’s first, premiering at the Sundance Film Festival in 2015. The film earned a nomination for the Independent Spirit Award for Best First Feature. Zhao went on to win Oscars for Best Picture and Best Director for her 2020 film “Nomadland.”

The GAP campaign features ads that highlight stories in a series of 15-second video portraits. St. John chose to represent her Lakota culture and speaks the words for generosity, kinship, respect and compassion in Lakoliyapi—the language of the Lakota people. 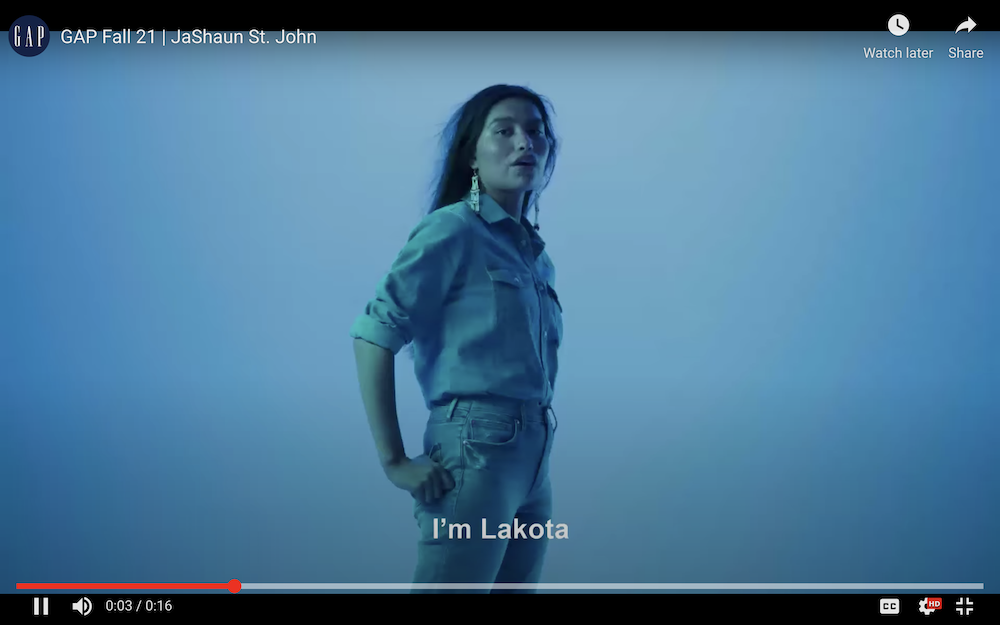 St. John represents speaks the words for generosity, kinship, respect and compassion in Lakoliyapi—the language of the Lakota people. (Photo via YouTube)“With acting, when I started my career, I didn’t really know anyone like that I could look up to,” said St. John. “So, I made it a goal to change and increase Native representation in film. Growing up on reservations and having big dreams can be scary, but it’s not impossible. I feel it’s important for the youth, especially, to know that.”

“I hope that people feel positivity, and when they see the increase in Native representation that they are inspired,” St. John said.

JaShaun’s father, Jesse St. John, is proud of his daughter’s accomplishments at such a young age and feels it is only the beginning for her and sees her as a role model for other Native youth growing up on reservations.

“She’s just getting started,” he said to Native News Online. “I hope it inspires all of Native America’s youth to be whatever they want to be.”

Both Jesse and JaShaun shared they are currently anticipating the release of JaShaun’s third film, but couldn’t share many details on its production.

CORRECTION: An earlier version of this article stated JaShaun St. John is 15-years-old. She is 20-years-old.