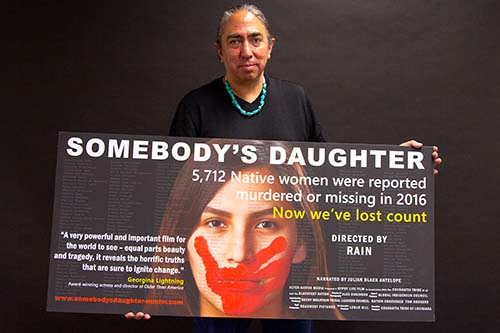 HOLLYWOOD, Calif. — With the political fall-out from the Iowa caucuses dominating the 2020 presidential calculus, one independent candidate has chosen to make a statement beyond the chaos.

Mark Charles, a dual citizen of the United States and Navajo Nation, has contributed a special introduction to the new documentary about Murdered and Missing Indigenous Women and Girls, Somebody’s Daughter.

Charles, whose “All The People” platform and oratory has intrigued many voters who have been exposed to it, continues to be marginalized by the mainstream media. Now, on what he describes as “a foundational issue” - the ongoing tragedy of Murdered and Missing Indigenous Women and Girls (MMIWG) - Charles is articulating his message outside of the standard campaign stump speech and meet-and-greets in small-town America.

At this week’s 11th Native Women in Film Festival, on the evening of Thursday, February 6, the only indigenous 2020 Presidential candidate’s message on MMIWG will be premiered when Somebody’s Daughter is shown at the historic Lumiere Theatre in Beverly Hills.

“Somebody’s Daughter is very powerful and helps people understand at a very systemic level that these tragedies are not being investigated. When your Declaration of Independence calls Natives ‘savages’ and your Constitution never mentions women, don’t act surprised when your indigenous women go missing and no-one cares,” said Charles.

Charles’ intro was directed by Rain, the director of Somebody's Daughter.

“The stories that are told in this movie are powerful, without being hopeless. This is a foundational level issue, and I’m so glad that the movie is bringing attention and helping people understand how deeply systemic the problem is, and it’s bringing these very real stories out so the public can hear them and can engage with them,” added Charles.

“What’s happening to indigenous women on reservations and across the United States is unconscionable and outrageous. And, it’s devastating that families are conducting their own searches for missing loved ones. It must end,” attested Vice President Joe Biden, in a virtual summary of Somebody’s Daughter.

“There could never be too much praise about Somebody's Daughter seeing success. This is not entertainment. This is life-saving work. We're watching Native American girls and women on various teams all across the country find a way to connect their voice with the brand, the artistic mark of this film, in ways we couldn't have predicted,” said Chairman David Sickey, elaborating on the Vice President’s comment. Sickey is chair of the Coushatta Tribe of Louisiana, the executive producer of the film.

“Progress is possible. But for missing and murdered indigenous women and their families, justice remains out of reach. The epidemic of violence against indigenous women and girls is a stain on our past and present. But it does not have to be our future,” continued Vice President Biden.

“As president, I will take a comprehensive approach, one that closes the data gap, increases funding and supports tribes in building their own programs, expands tribal authority, grows coordination among law enforcement agencies and provides additional resources to tribal enforcement, and expands access to culturally sensitive resources for victims and survivors,” Vice President Biden said.

Recommendations made in Somebody’s Daughter that have been proposed by the alliance of the Global Indigenous Council, Rocky Mountain Tribal Leaders Council and Great Plains Tribal Chairman’s Association.

Since it was premiered at the Four Directions 2020 Presidential Forum in Las Vegas on January 15, Somebody’s Daughter has risen rapidly in profile. The upcoming schedule of screenings nationwide “increases daily” according to the production company, Alter-Native Media, and in a little over a week the trailer for the documentary has received over 66,500 views on YouTube

“In upper levels of leadership, throughout the halls of Washington, DC and legislatures, this film is moving and will continue to advocate for dedicated funds, more manpower, and due justice for our missing and murdered women, girls, Two Spirit relatives, and increasingly our young men. Violence does not discriminate, and neither should our laws. This film belongs to all of us. Its success is a national treasure,” concluded Chairman Sickey.

For updates and screenings visit www.somebodysdaughter-mmiw.com