The Saint Regis Mohawk Tribe is mourning the loss of former-Tribal Chief Paul “Kahentase” Thompson. According to a press release from the tribe, he began his journey into the spirit world on Monday, November 1, 2021. 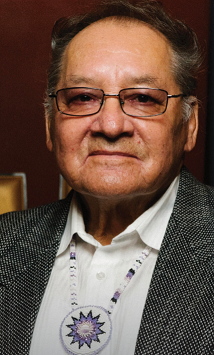 The tribe’s press release said Thompson “will always be remembered as a passionate and devoted elder statesman for the Saint Regis Mohawk Tribe and the community of Akwesasne.

Prior to serving as tribal chief, Thompson was a successful entrepreneur and experienced tradesman, with numerous businesses and decades of construction experience that included work as a boilermaker, pipefitter, and more than 50 years membership with Ironworkers Local 440.

Fortunately for the tribe, Thompson merged his business expertise and construction experience into community service by being a staunch champion of local organizations, committees, and economic projects.

His creativity, ingenuity, and ability to foster cooperative efforts between leadership and business owners served to develop revenue streams that continue to benefit the Akwesasne community today.

Serving the community was in Thompson’s lifeblood; he was constantly dedicated to strengthening the self-sustainability and economic independence of Akwesasne through the development of the tribal licensing system and construction of the Akwesasane Mohawk Casino. As a member of the Tribal Council that helped open the casino in 1999, Thompson had the honor of installing the last piece of steel that “topped off” the casino’s seven-story hotel in July 2012.

Thompson continually applied his knowledge of Kanien’kéha (Mohawk language), as well as the culture and customs of the Kanien’kéhaka (Mohawk People) to improve and strengthen relationships with external governments and stakeholders. The protocols that he exquisitely applied in government-to-government interactions was a masterful example of Mohawk diplomacy.

A staunch believer in the power of education, he was an integral figure in establishing tribal funding to support the Akwesasne Freedom School.

In observance of former-Tribal Chief Paul “Kahentase” Thompson’s passing, the tribal flag at the Ionkwakiohkwaronon Tribal Administration Building will remain lowered until the day after his funeral. We offer our sincerest condolences to his family and friends.