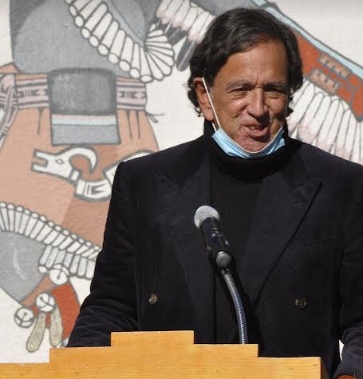 ALBUQUREQUE, N.M. — Pueblo Governors, donors and community activists joined former New Mexico Governor Bill Richardson and students from the Native American Community Academy (NACA) at Indian Pueblo Cultural where students received 100 pairs of new Nike shoes last Friday. An additional 400 pairs of quality shoes, for a total of 500, are being ordered for Native students in need at other Albuquerque-area schools and will be delivered in January.

“Today I got to visit NACA, a Native charter school, with 474 students who are excelling in technology, Tribal languages, science and the arts,” said Richardson. “And I had the honor of delivering special gifts to Native students who are the future of their people and who have shown incredible strength and resilience during this pandemic. It’s one way we can help them come back strong.”

Former Acoma Governor Ron Shutiva, IPCC’s board chairman, offered an Acoma prayer and translated his words for students to encourage them to continue their education. IPCC President Michael Canfield, a founding board member of NACA, gave a warm welcome and told students how proud they make the community with their achievements.

Twenty students representing the NACA student body came to IPCC’s outdoor courtyard, with masks and social distancing, to accept the large shipment of shoes. They offered words of thanks to donors, and a Lakota song of gratitude by Adriano Begay. Richardson also presented NACA with a two-year grant from the Good Sports Foundation to provide sports equipment and apparel.

Zane Rosette, NACA executive director said they were thankful for the gifts and appreciated leaders thinking of their students and contributing to help students with shoes, apparel and sports equipment. The Native charter school has a specialized cultural curriculum offering Native languages.

Since 2020, the Fund delivered 450 pairs of shoes to eight schools in Shiprock, NM in September and schools in Crystal, Manuelito, Fort Defiance and Sawmill. With additional donations, students in Crownpoint, NM and Albuquerque will receive new shoes through January 2022. In total, the project is donating 900 pairs of quality shoes.

Ahtza Chavez, executive director of NAVA Education Project, talked about their organization’s work on voting rights, redistricting, and building a space for youth and community near the Coronado Center where they just bought a building.

“We’re heavily invested in New Mexico and uplifting Native voices in the state and region,” she said.  “We’re bringing money into the state for key issues and infrastructure that is important to our working families. We brought 55 wifi hot spots to the Navajo Nation and we led the NM Census Coalition. And we just won the redistricting fight to protect our voting rights.”

Chavez said supporting the shoe donation is a meaningful way to uplift youth and support their needs. As a high school athlete, she worked extra jobs to afford new shoes, she said, so she understands it’s hard to afford quality shoes, especially for sports.

“We’ve long been part of advancing Native rights and we’re proud to be part of this effort for our youth. The Native Leadership Collective helps to raise the visibility of urban natives and to support our relatives and community,” Harris said. “We’re 8.2 percent of Albuquerque’s population and represent 400 different Tribes. We are very proud of NACA students.”

Harris also thanked Governor Richardson for his recent diplomatic work in Myanmar to free journalist Daniel Fenster and Ma Aye Moe, a former member of his staff, from prison.

The Fund partnered with the Notah Begay III Foundation to get a 50 percent discount on shoes, so they can buy double the numbers of shoes.

“Thank you to Governor Richardson and the many sponsors who contributed in order to provide this wonderful gift to Native youth,” said Notah Begay III, champion Navajo golfer and Gold Channel analyst. “It’s an honor to be a part of this initiative to encourage and uplift Native youth to be healthy and active for their lifetime. At our core, we strive to serve and uplift Native youth, so it was without hesitation that we stepped in to help bring something positive to Native youth who were most affected by the COVID-19 health crisis.”