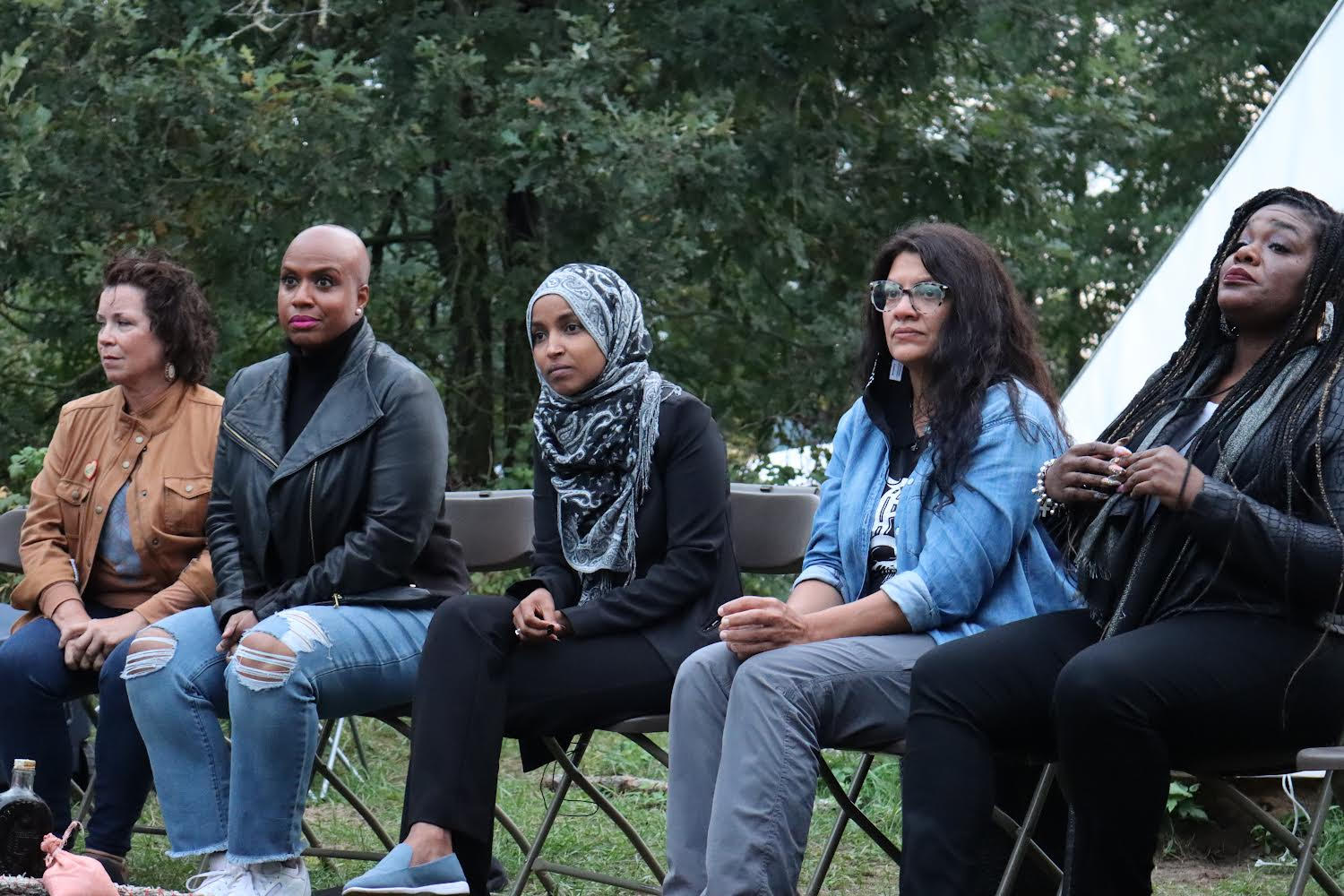 The four Democratic congresswomen are collectively known as “The Squad” their colleagues in Congress. The group is well known for being progressive and was often targeted by former President Donald J. Trump.

“The climate crisis is here on Turtle Island,” said Giniw Collective Co-Founder Tara Houska as she welcomed the group of lawmakers to Camp Namewag, a Giniw Collective Line 3 resistance camp. “We are honored that you have come to meet with us as we discuss the destruction of Mother Earth.”

The visit was in response to an invitation for Rep. Omar by camp leadership to bring her colleagues from Washington to a Line 3 resistance camp. The contingency will also make visits to Bemidji and other parts of northern Minnesota this weekend to speak with members of Indigenous communities and others who have been protesting construction of the Line 3 pipeline. According to Enbridge, construction of Line 3 is more than 90 percent complete with anticipation of oil flowing through the pipeline by the end of the calendar year.

The visit by the Congresswomen is part of a final pitch to President Joe Biden to revoke the permits for the pipeline replacement project. On Monday, August 30, 2021, more than 60 members of the U.S. Congress wrote a letter addressed to President Biden asking him to project Indigenous sovereignty citing climate change, police brutality, and sex trafficking.

“We’ve almost been ran over a couple of times near Camp Firelight as we were practicing our treaty rights near the pipeline,” said 13-year old White Earth Tribal Member Silan Neeland to the Congresswomen. “The trauma continues, day by day, and I see police shoot our relatives for conducting ceremony.” Neeland’s testimony brought several Congresswomen to tears.

All law enforcement agencies in northern Minnesota are reimbursed by an escrow account paid for by Enbridge, but supporters of the pipeline cite that reimbursements are for salaries associated only with monitoring protest activity near construction sites. More than 900 people have been arrested or cited for demonstrating against Line 3 since construction began in December 2020. The total amount incurred by law enforcement agencies has surpassed $2 million.

“We’ve all been fighting this pipeline for 7 to 8 years,” said Honor the Earth Executive Director Winona LaDuke to the Congresswomen. “We really appreciate you all coming to hear from us, but we really need Biden to do something.” LaDuke has been arrested several times for opposing construction of Line 3 and faces multiple charges in multiple jurisdictions.

Rep. Ayanna Pressley thanked the participants in Friday evening’s meeting for hosting the delegation and allowing the members of Congress to learn from those who have been encamped in northern Minnesota.  “Sadly, we are beneficiaries of the legacy of this country, which seeks to heal trauma with more trauma.”

“The violence and the violation of your sacred people must stop,” said Rep. Pressley to the group while in tears. “You are worthy of so much more.”

New York Representative Alexandria Ocasio-Cortez was anticipated to travel to northern Minnesota, but had to deal with a climate change emergency in her home state of New York while parts of the state are flooding from Hurricane Ida.

The visit to northern Minnesota comes the same day a group of Minnesota Republicans and union members gathered in the U.S. Capitol in support of the pipeline. “In northern Minnesota, the constituents I represent are happy this project is moving forward. Are happy about the economic benefits. Are happy about the vetting process,” Rep. Pete Stauber (R-Minn.) said to The Hill on Friday.

Valued at $3 billion, the Line 3 tar sands oil pipeline will be the largest tar sands oil pipeline in the world. Once completed it will transport 760,000 gallons of tar sands oil per day through pristine wetlands in northern Minnesota. If a spill were to occur, Indigenous leaders say it would destroy many wild rice beds, affecting Anishinaabe treaty rights in Minnesota. Opponents and Indigenous leaders say that a more thorough environmental impact statement (EIS) should be conducted.

The pipeline has already been replaced in Canada, North Dakota and Wisconsin and is aimed to restore the pipeline to its original capacity of 760,000 barrels a day. According to Enbridge, more than 20 federal, state and local permits and approvals were needed prior to construction, making Line 3 the most studied pipeline project in Minnesota history.