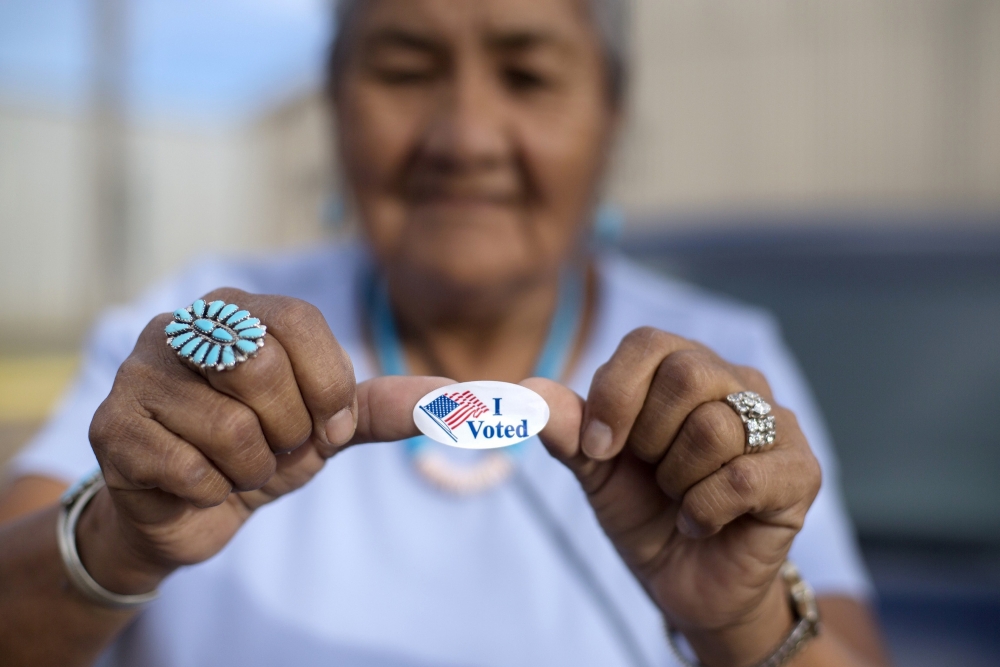 Voter suppression is still a major issue across Indian Country, with voter ID laws, address requirements and scant polling places making it harder for American Indians and Alaska Natives to cast their votes. However, Indian Country also has something to celebrate this election season: courts have struck down several laws this year that would have made voting in 2020 even more difficult. Here are some of the wins tribes and voting experts are celebrating.

Alaska is home to more than 200 federally recognized tribes, many of which live in remote areas. Because tribes like Arctic Village, a community of just over 150 in the rural northeast of the state, have had to go into lockdown to contain Covid-19 outbreaks, the witness signature on absentee ballots was “crazy,” according to Samantha Kelty, staff attorney for the Native American Rights Fund.

“When we've had those outbreaks, we've had to shut the community basically down, and those people have to go into quarantine,” Charlene Stern, professor at the University of Alaska Fairbanks and a tribal member of the Native Village of Venetie Tribal Government, said. Given that the Arctic Village community has a large number of elders, “the witness requirement could potentially put people at risk if they had to get somebody to witness the signature. And we just felt like that was unconstitutional[for a person to] have to choose between their health and their right to vote, and have that vote counted.”

Although this witness requirement has been around for a while, the state refused to waive the requirement this year, even as the pandemic made this requirement harder to meet. In response, a coalition including the Native American Rights Fund, the ACLU, the Arctic Village Council, the League of Women Voters, and two individuals created a motion to suspend that requirement. Although the Arctic Village led the effort, they didn’t just do it for themselves. “We were thinking about all of the other rural Alaska Native communities and the elders that are also in this pandemic, and we were worried about the chance that all of these really important individuals wouldn’t be able to express their voting rights just like anybody else,” Stern said.

A judge ruled on the case in the plaintiffs’ favor just weeks ago, and while Stern acknowledges the work isn’t done, she’s happy with the outcome. “It's part of a long history of our communities continuing to enforce our legal rights, whether it's in the area of voting or in land or in self-determination,” Stern said. “Our community has always been a leader in challenging attempts to infringe upon our rights. And so for us, this is just one example of our community's continued struggle, but we were very happy because a lot of times we don't always prevail.” 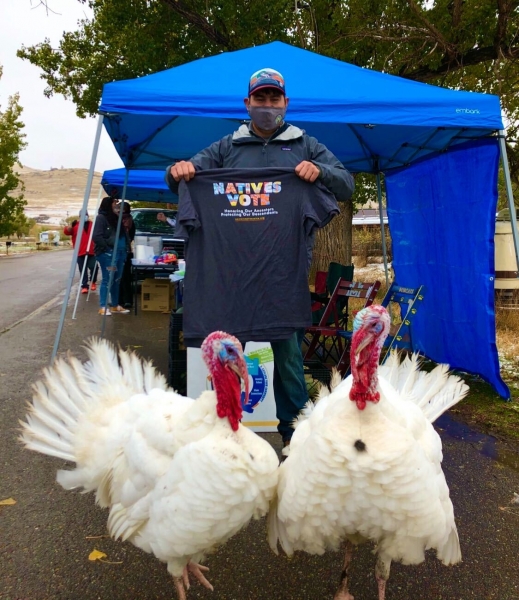 Volunteers in Montana aim to increase voter registration and turnout in this year’s election.Montanans voted to pass a ballot initiative in 2018, the Ballot Collection Prevention Act (BIPA), which would have prevented people from picking up ballots from more than six voters, and mandated that the ballot collector had to be related to the voter as a family member, acquaintance, caregiver or household member.

However, the ballot measure was deceivingly worded, according to Kelty, omitting key details about how the law would work in practice and implying that ballot collection was a threat to election integrity. NARF, along with the ACLU and Western Native Voice, sued, calling the ballot question’s deceptive wording unconstitutional.

For Native communities in Montana, having someone pick up their ballot is often the only way to ensure their vote will be cast. Kelty said this measure disproportionately affected Native communities because many reservations have poor roads and many Native people don’t have mail boxes, often living far from a post office with limited hours to drop off their ballot. “Sometimes they chose to spend their last 30 bucks on groceries for the family, instead of on filling up a tank of gas for [dropping off a ballot]” Kelty said.

“It was very degrading as far as like, telling me who I can and cannot give my ballot to, I think that's another infringement just on my right to be who I am and my freedom of association, my freedom of speech, my right to vote,” said Marci McLean (Piikuni), executive director of Western Native Voice and Montana Native Vote, who grew up on the Blackfeet Nation in Montana.

Once the case was brought to court, “the judge saw very quickly from our witness testimony or evidence just how burdensome it was to the Native communities, and that it serves no legitimate purpose for the state of Montana,” Kelty said.

Now, McLean has spent time leading up to the election safely collecting as many ballots as she and her team from Montana Native Vote can. “There's so many efforts to try and suppress our vote and our voice as people of color and as Indigenous people,” she said. “It was very liberating to have that ruling after the fighting and all the people that come together to work for that to defend this in court. And on top of that, in these Covid times, it means there'll be a lot more ballots cast, because a lot of our tribal nations are under shelter in place or stay at home orders” Although she is proud of this victory, she’s hoping for more Native representation on the ballot itself. “I’d love to see a Native American governor,” she added.

Kelty also assisted with another victory in Montana: increasing the number of satellite election offices on reservations. The counties containing the Fort Peck, Northern Cheyenne and Blackfeet reservations initially refused to provide them for the tribes, even though they had requested them early and gone through the necessary process to get them.

Although the counties cited the Covid-19 pandemic as the reason for turning down the tribes’ requests, they provided these extra election offices in majority-white county seats. As soon as NARF got involved, two of the three counties relented shortly after. However, Pondera County, home to the Blackfeet Nation, initially failed to respond. When NARF threatened to sue, they relented, too.

Although the tribes now each have a satellite election office, they all have limited hours. “So it's not quite equitable,” Kelty said, “but we're better than where we were.”

The Pyramid Lake Paiute and Walker River Paiute Tribes in Nevada won a similar victory in 2016, though they still must request a site for each election.

In addition to the satellite election offices, Nevada has seen other major victories in the lead-up to this election, largely thanks to the passage of Assembly Bill 4, which codified a number of voting rights for Native people in the state last month.

Similar to Montana, Nevada had a statute that criminalized the collection and delivery of a ballot by anyone other than a family member. However, in Nevada, picking up ballots was a felony. A.B. 4 struck down this law for this election, citing the pandemic as the reason.

A.B. 4 also clarified that ballots received up to three days after the election with an unclear postmark will be counted in the upcoming election. This helps ensure that Native ballots, which often come in from remote areas on reservations where mail service is slow and post offices have limited hours, are properly counted.

North Dakota, the state with the worst Covid-19 outbreak in the world at the moment, also experienced a few major election victories this year.

A multi-year lawsuit filed on behalf of the Spirit Lake Nation and Standing Rock Sioux Tribe turned out in their favor earlier this year when their over 7,000 voting-age members were guaranteed the right to use tribal IDs and tribally designated street addresses at polling places this year.

“With most voter ID laws, you hear ‘integrity’ as the phrase that's used the most. A lot of elected officials nowadays, conservative elected officials have been sounding the alarm about voter fraud,” Corey Goldstone, communications manager of the Campaign Legal Center, said. “We've seen time and time again, when courts have asked... ‘where's the evidence? Where's the fraud?’ we've seen repeatedly that they can't find any because it's not really possible given the decentralized, highly secure, highly safe system that we use in the United States to actually execute a widespread voter fraud effort.”

Goldstone added that many people living on reservations didn’t have traditional addresses, and previously had to spend a lot of time and money to circumvent the address requirements. Since that law has been struck down, however, the new provision allows Native Americans who don’t have an address to “point on [a] map where they live,” Kelty said. “And then that becomes the official residence. So that was a super cool creative provision.”

Though O.J. Semans, executive director of Four Directions Vote and an enrolled member of the Rosebud Sioux Tribe, considers this a “a real big victory for Indian Country,” he cautioned that districts are closing polling places at the last minute. “We don’t know, on Election Day, what polling places will be open or closed, or what excuses they're going to have, either.”

'We're going to see the fruits of this'

Although voters’ rights advocates are excited about the wins this year, with NARF winning more than 90 percent of voting rights cases, they’re careful not to get too excited, because plenty of barriers remain for Native Americans casting their votes.

“If the white middle class had to go through the type of barriers that Native Americans go through from registering to vote to voting, they would see their turnout plummet to that equal to or less than Native Americans,” Semans said. “When you go to vote, you vote knowing what you're going to sacrifice for it, how much time it's going to take you, how much effort it’s going to take you, how much it’s going to cost you to get there.” Native people vote up to 10 percentage points less than members of other racial and ethnic groups, according to Native Vote.

“I do think that we're going to see the fruits of this,” Kelty said. For her, although these victories are satisfying, “the ultimate success measurement” is when American Indians and Alaska Natives have “elected candidates that they wanted to elect and those candidates then responding to their needs, and to the issues that are important to Native Americans,” she said. “That's going to be when we all breathe that sigh of relief.”

Author: Amy SokolowEmail: This email address is being protected from spambots. You need JavaScript enabled to view it.
Amy Sokolow is a fellow with Native News Online and a recent graduate of Northwestern's Medill School of Journalism master's program. She previously worked for STAT News and The Atlantic Magazine, and will focus her reporting on public health and election issues. She's originally from a small town north of Boston and can be reached at [email protected] or on Twitter @amysokolow.